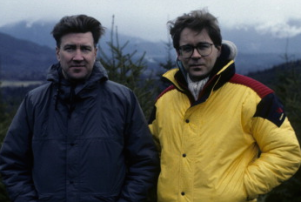 Looking at Twin Peaks, you get the feeling that David Lynch was like a kid placed in a room with an enormous amount of toys. Not an unlimited number of toys, but enough to keep him interested for a long, long time. A television series also gave Lynch a longer format to work with, allowing him and co-creator Mark Frost to develop characters and themes, to experiment, to take risks and to explore. Sure, there were restrictions; this was network TV in the early 90s, after all, but it may not be too much of a stretch to say that with Twin Peaks, Lynch was at least partially responsible for pushing boundaries and exploring some unchartered television territory.

The show’s premise is simple: a young girl’s dead body is discovered on the bank of a river, shocking everyone in the small town in Washington state. Sheriff Harry S. Truman (Michael Ontkean) begins questioning all the locals, all of whom seem to have some connection to the dead girl, and all of whom have some element of weirdness in their lives.

Of course the question on everyone’s mind in 1990 was “Is the show any good?” Audiences and critics responded positively. Those unfamiliar with Lynch’s work were lured in with a good mystery filled with quirky, oddball characters. Lynch followers tuned it because it was Lynch. In a way, they probably already knew more or less what they’d signed up for.

One of the themes Lynch loves to explore is that of a mysterious place filled with people who carry hidden secrets. By the time Twin Peaks came along, Lynch had already explored this theme most successfully with Blue Velvet (1986) as a young man named Jeffrey (Kyle MacLachlan) discovers a nasty underside to his seemingly squeaky-clean hometown. With Twin Peaks, Lynch had much more time and space to explore the small logging town and although the town is small, the characters – and the things they’re trying to hide – are large.

On the surface, the main thing that’s hidden in the first season of Twin Peaks is the killer of Laura Palmer (Sheryl Lee). That mystery initially drives the plot and becomes a thread running through the entire show, but the main idea Lynch is exploring is the secret lives of the people of Twin Peaks. Everyone has something to hide (even Laura Palmer) and Lynch makes the revelation of those hidden things more urgent in ways that are sometimes dangerous and horrific, and at other times as contrived as something you’d see on a soap opera.

Although the setting of the show looks somewhat of its time, the town of Twin Peaks often appears to be set decades past, stuck in a sort of “land that time forgot.” You’re not really sure when it is here, since many of the characters drive old cars and wear clothes that could’ve been fashionable decades ago.

Yet a certain period seems to push itself to the forefront. It’s not unusual to see Audrey Horne (Sherlynn Finn) wearing a sweater/skirt combination that’s straight out of the 50s, or James Hurley (James Marshall) riding a motorcycle, sporting a black leather jacket that practically screams James Dean. The soundtrack sometimes features songs from the period or tracks of generic noirish jazz.

Regardless of the era, secrets abound. Having grown up in a town of about 5,000 people, I can relate to the secrecy of Twin Peaks. Yes, everyone has secrets, but many of them are secrets only hidden from strangers and newcomers. When you live with the same people for 20 years, there really aren’t that many secrets and if that’s the case, there’s no need to talk about them among ourselves. Only when someone new comes along (like the audience walking into Twin Peaks) do the enticements of secret information present themselves.

Agent Cooper (again, Kyle MacLachlan) is the perfect newcomer to Twin Peaks. Seeking to uncover Laura Palmer’s killer, Cooper is in a unique situation to discover the underbelly of the town and everyone in it. Some of his findings are relevant, some are just plain weird, but he doesn’t learn everything (or at least at the same time) that we do. Excursions abound and sometimes it’s easy to lose track of the show’s focus because the supporting cast is so interesting and weird.

Maybe it’s the voyeuristic element that makes Twin Peaks so appealing to us, or maybe it’s the fact that we, too, have secrets that we’re glad aren’t being investigated by Agent Cooper. And maybe we know people that are this weird.

Those new to the work of David Lynch might wonder about the odd mixture of darkness and humor, of weirdness and soap opera. If you’re familiar with other films by Lynch, you’ll have a fair idea what to expect, but otherwise it could take some getting used to. In this first season, at least, the journey is time well spent.

In the coming weeks, I’ll have more to say about the second season of Twin Peaks, the movie Fire Walk with Me, and the upcoming mini-series set to air in 2016.