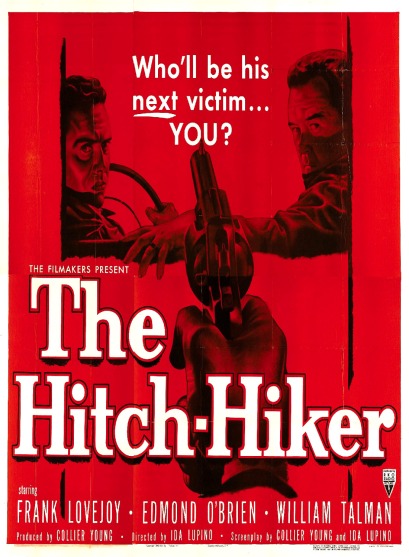 My mother always told me two things I should never do: go to a chiropractor or pick up a hitch-hiker. I don’t know what initiated her first rule, but I’m pretty sure the second came after watching Ida Lupino’s The Hitch-Hiker.

The film opens with two fishing buddies Roy (Edmond O’Brien, R) and Gil (Frank Lovejoy, L) headed to Mexico. Along the way, they pick up a hitch-hiker (William Talman, center) who soon pulls a gun on them and begins calling the shots. When the hitch-hiker insists Roy tune his radio to a news broadcast, the guys learn that their new passenger is Emmett Myers, a psychopath wanted for multiple murders.

It’s not long before Myers starts harassing the two men, toying with them by challenging their commitment to wives, jobs, responsibilities. “You guys are soft,” Myers sneers. “You know what makes you that way? You’re up to your neck in IOUs. You’re suckers! You’re scared to get out on your own. You’ve always had it good, so you’re soft. Well, not me! Nobody ever gave me anything, so I don’t owe nobody.” 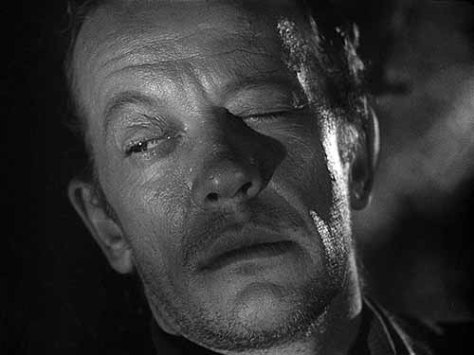 Although Myers doesn’t leave them alone long enough for Roy and Gil to come up with a good plan, you can tell they’re constantly looking for a way out of the mess they’re in. Even when night falls and they know Myers has to sleep, there’s no guarantee they can elude him; Myers has a damaged right eye that’s open even when he’s asleep, so they’re never really sure whether or not he’s watching.

One thing they are sure of: if Myers hears a radio report connecting him with the disappearance of the two men, he’ll kill them.

The Hitch-Hiker is credited as the first film noir directed by a woman. Lupino’s direction is economical with excellent pacing and tension. You won’t find any wasted or unnecessary scenes. Some would say there’s little to no subtext to discover in the film, relying instead on 100% suspense. David J. Hogan in Film Noir FAQ cites that there’s hardly any moral message being delivered here, other than (Myers) saying that “If you’d gone to where you told your wives you were going instead of detouring to carouse in Mexico, none of this would have happened to you.”

The implication of deception is certainly there, yet I think there’s more to be discovered. The location itself speaks volumes. We’ve got the road – certainly a symbol of freedom, especially in the American West – as the backdrop and two men enjoying that freedom, even though it’s represented by something as simple as a fishing trip. Myers’s attack is a threat to that freedom, symbolizing a larger attack. I don’t want to make too much of this, but the symbolism is clearly there for a reason. Perhaps more importantly, Myers attacks something he’s never had: friendship. At one point, Myers himself notes that if they hadn’t stuck together, one of the two men probably could’ve escaped. Yet friendship is something he’s never experienced. He never saw any need in it.

When it comes down to it, Myers is a small man in a big world, a point made even more explicit by the vastness of the desert locale as well as the confines of the 1950 Plymouth (which was, ironically, a fairly big car). We – along with Roy and Gil – realize that without his gun, Myers is just another cheap hood. But while he has the gun, Myers has power, something he can get in no other way. He doesn’t have to say much, but he does, taunting the men, wanting them to provoke him. Proverbs 12:6 states “The words of the wicked lie in wait for blood, but the mouth of the upright delivers them.” Myers is always challenging Roy and Gill because he’s always challenging life, the world, God, everything. In the meantime, we wait to see if Roy and Gil are upright and whether their words (or actions) will deliver them.

William Talman is perfect as Myers, a cold, calculating character that reminds noir fans of his role as Dave Purvis, the mastermind of the heist in Richard Fleischer’s Armored Car Robbery (1950). (Fans of the classic TV series Perry Mason may remember Talman as DA Hamilton Burger.) Talman could play tough and sadistic with the best of them and this performance solidifies his villain status in the noir canon.

The Hitch-Hiker was inspired by the true story of Billy Cook, a hitch-hiker who killed six people from 1950-51. The screenplay was written by Robert L. Joseph and Lupino’s then husband Collier Young. Although a fairly low-budget feature, cinematographer Nicholas Musuraca – an RKO legend who worked on such noir films as Stranger on the Third Floor (1940), The Locket (1946) and Out of the Past (1947) – does wonders here.

Although Lupino delivered a taut, white-knuckled tale with hardly any budget (most of her films were made for less than $160,000) and made several more films, she’s still not given the credit and respect she deserves. I hope to see more of Lupino’s work in front of and behind the camera this year. I hope you’ll join me.