A woman named Pat (Claire Trevor, middle) goes to visit her man Joe (Dennis O’Keefe, right) in prison. Before she can see him, a prison official informs Pat that she’ll have to wait: Joe has another visitor that’s already talking to him. Pat is shocked to find a beautiful young social worker named Ann (Marsha Hunt, left) exiting the visitors area, but goes on in to see Joe to discuss her upcoming role in helping him escape. 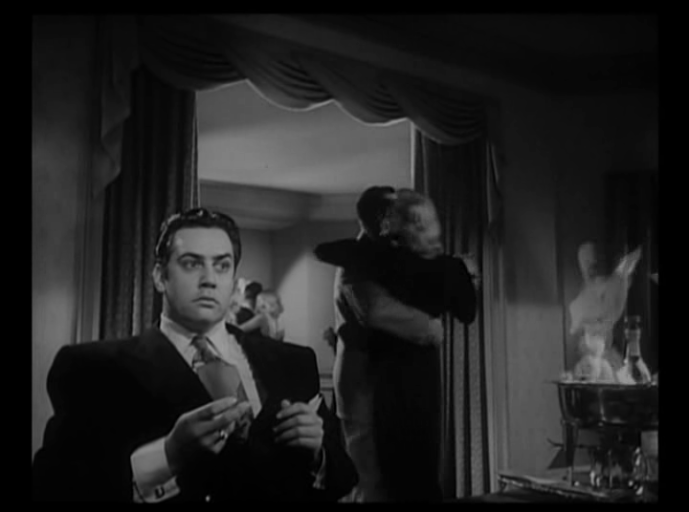 Joe isn’t a typical noir character: a straight-laced guy who had a lapse of judgment or was influenced by a femme fatale to commit a crime. No, Joe’s a criminal and he’ll be the first to admit it, but he’s not guilty of the crime he’s been imprisoned for this time. He’s been set up by a crime lord named Rick Coyle (Raymond Burr in a really nasty role). With Pat’s help, Joe plans to break out of the joint and settle things with Coyle.

Joe’s escape is just the beginning. Once he’s out, he wants what’s coming to him, what he’s owed by Coyle, but those things aren’t Joe’s driving force. He’s after revenge, plain and simple. In fact, Joe is practically out of his mind with revenge, taking risks he’d normally know better than to even attempt. 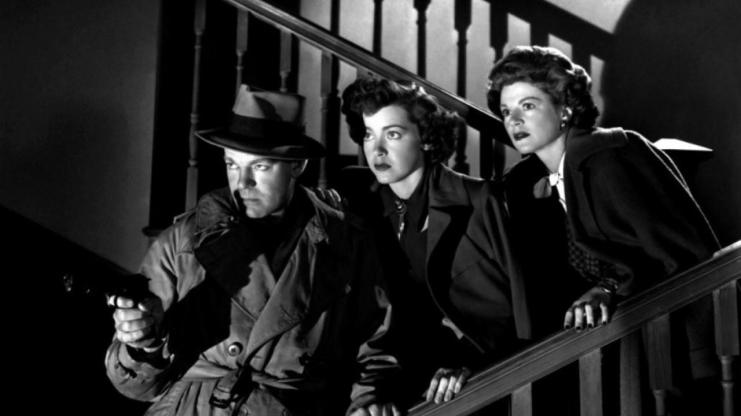 One of Joe’s revenge-clouded ideas is to kidnap Ann, the one person who’s genuinely trying to get Joe to do the right thing and turn himself in. In Joe’s mind, the cops are looking for a single escaped convict, not a man traveling  with two women (although that situation in itself invites a question or two, something Joe never seems to consider). Things really get interesting when it becomes clear to Pat that Ann’s concern for Joe goes far beyond that of a social worker and a client. Raw Deal is a fine thriller on its own, but what makes it interesting is the way the sexes are portrayed: you have two men – Joe and Coyle – embroiled in a bitter conflict that only one of them can win, and two women who both seem to have Joe’s best interests at heart. Again, only one of them can win as well. (Or can they?)

The performances in Raw Deal are good and John Alton’s cinematography is excellent, making the city and its oppressive, darkened elements an essential feature of the film. The film is fairly early in Mann’s career, but it was clear by the time Raw Deal was released that he was a director you couldn’t ignore. Mann was responsible for many noir films such as T-Men, Desperate, and He Walked by Night (uncredited) before later focusing on several top-notch westerns (Winchester ’73, The Naked Spur, Bend of the River, all starring James Stewart), war pictures, biopics and more. He’s certainly an essential noir director worth exploring beyond his noir films.