When I saw weeks ago that Citizen Kane (1941) was going to play at the AFI Silver in Silver Spring, Maryland, I experienced one of those “bucket list” (for want of a better term) moments in life. I’ve always wanted to be able to travel back in time to key events, not so much from world history, but from arts history. What I wouldn’t give to have heard some of David’s psalms performed live, for instance, or Stravinsky’s The Rite of Spring premiere in Paris in 1913, or Bob Dylan “going electric” at the Newport Folk Festival in 1965, to name just a few.

I’ve always had “Watching Citizen Kane in a theater with an audience from 1941” on that list. Of course I can’t go back in time to 1941, but the screening of the film at AFI last night (as part of the Orson Welles Centennial) gave me the chance to realize most of that wish. The AFI Silver is a gorgeous theater, one reminiscent of those grand old movie houses that you can see now only in photographs: elegantly designed and decorated shrines that seem at least as otherworldly as the films projected in them, the perfect setting for Citizen Kane.

Of course so much has been written and said about Citizen Kane, all I can add here is my own visceral experience.

There’s something magical about seeing an image you’ve experienced many times at home on a small scale expanded to something much larger than yourself. When the famous “An RKO Radio Picture” image appeared, it was like seeing an old friend, but one who has grown not only in stature, but importance, almost as if the kid you used to hang out with on the playground with is now a regal foreign ambassador.

Yet that experience was nothing compared to the film’s gigantic, overwhelming title image, one that’s bold, daring and literally in-your-face. I tried to imagine what 1941 audiences would’ve made of that stark, powerful title. It certainly speaks to the brash confidence of the then 25-year-old Orson Welles, but it does more than that. Most title images from films of that era also contained either the names of the stars, the producers, the studio, or something. Not this one. Although simple, the powerful title image tells audiences that something different is about to happen.

And of course, it does. Citizen Kane is filled with so many images that are either now iconic or have been imitated to death, but seeing them on the big screen allows us to lose ourselves in the grandeur, spectacle, and power of those images. In scene after scene, shot after shot, I was mesmerized at Welles’s vision and Gregg Toland’s cinematography. In 1991, Roger Ebert wrote that he had seen Citizen Kane “at least 50 times.” Once you’ve seen the film, you can understand why. You could spend a lifetime studying Toland’s cinematography alone, but there’s also the writing, the acting, the design, the sets, the sound… The entire experience was overwhelming to me last night in 2015, and I’ve seen a lot of movies that were made after 1941. I can’t comprehend how even the most rabid movie fan from 1941 – with his or her level of previous movie experiences – would’ve reacted to Welles’s masterpiece.

Citizen Kane also contains much drama and sadness. One of the saddest moments in film history occurs when we see Kane’s mother Mary (briefly but brilliantly portrayed by Agnes Moorehead) as she watches her son play in the snow for the last time before sending him away. She is flanked on one side by the banker Thatcher (George Coulouris, left) and Kane’s father (Harry Shannon), men with very different desires anxiously awaiting her decision. We know that she’s weighing everything carefully in her mind, but the outcome is inevitable; she really has no choice. Although she appears stoic, Mary’s voice calling to the boy betrays the part of her that’s just died. It’s a stunning moment. 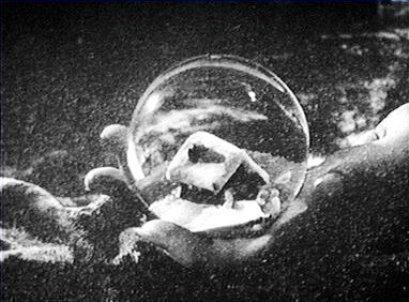 Most of the members of the audience (only about 30 or so people) were my age or older, so you have to assume that everyone in the theater has seen the film before and knows the infamous ending. Yet when it happened, you could almost feel an exasperated sigh linking us all as one large entity. For just a moment, we’re all of the same mind, even though we don’t know each other, have never officially met and probably never will. That is part of the magic and mystery of the movie-going experience.

To my surprise, when the film ended and the house lights went up, no one moved for several moments. Neither did they speak. I had expected couples and friends to say something about the film, but they just sat there silently, perhaps in awe or just trying to process what they’d experienced. Perhaps Citizen Kane is just one of those great films that contains so much and throws so much at you that a moment of silence is the only appropriate response. I think maybe Welles knew that and somewhere he’s smiling over the fact that the magic still works.

6 thoughts on “He’s Still Got It: Orson Welles, Citizen Kane and Modern Audiences”