I am convinced that director Ana Lily Amirpour is going to one day make a great film. A Girl Walks Home Alone at Night is not that film, but it’s pretty good and it sure gets your attention.

If you follow movie blogs or occasionally keep up with movie news on Twitter or Facebook, you’ve no doubt seen and heard much buzz about the film since it’s showing at Sundance in 2014. Much of the buzz is justified. All I had to hear was “The first Iranian vampire spaghetti western” and I was hooked.

Amirpour grabs our attention immediately as we see a young man in jeans, a white T-shirt and sunglasses as he rescues a cat from a dilapidated building. The stark black-and-white cinematography (wonderfully rendered by Lyle Vincent) shows the man walking through an equally dilapidated post-industrial Iranian ghost town called Bad City. (The film was actually shot in California.) We hear the opening song “Charkesh e Pooch,” a minor-key waltz featuring an accordion and a Dylan-like vocal by the Iranian band Kiosk. The scene is familiar enough, yet strange enough to keep us unbalanced. When A Girl Walks Home Alone at Night achieves this combination of the familiar and the unfamiliar, it brilliantly creates an effective, otherworldly atmosphere.

Yet one of the problems I had with the film is that of the atmosphere gaining the upper hand over the story, which is not that complicated, but contains many interesting elements. (More on those in a moment.) 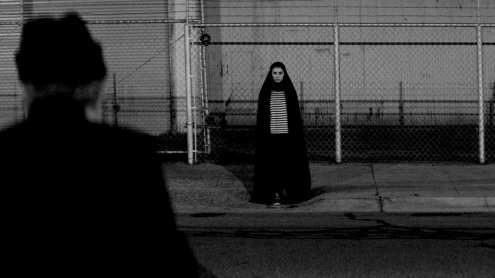 The story involves Arash (Arash Marandi), the young man from the opening who takes care of his drug addict father Hossein (Marshall Manesh), who owes much money to a dealer named Saeed (Dominic Rains). Saeed realizes Hossein will never be able to pay up, so he takes Arash’s car as payment. From this seemingly simple plot device, we get connected to a prostitute (Mazhan Marno), a young boy living on the streets (Milad Eghbali) and the star of our show, The Girl (Sheila Vand). Arash forms a strange but respectful relationship with The Girl, which is unique in so many ways, one of which involves Arash meeting her while he’s wearing a Dracula costume.

A Girl Walks Home Alone at Night is not a fast film in that several things happen quickly to advance the plot. In fact, much of the film takes its time in establishing mood and setting for the characters. That’s important: many of the characters aren’t actually explored in much detail, but their “moods” are, especially with respect to their relationships to music, the soundtrack playing an essential role in the film.

One of the aspects of the film that defies our conventions is in the handling of individual scenes. Amirpour allows several scenes to go on longer than they need to, which does create a certain amount of tension, but also creates impatience with an audience who may be more plot-focused. 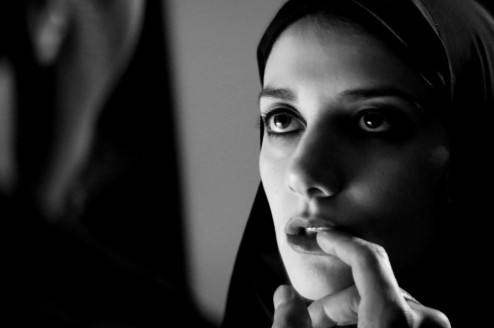 Yet the strongest elements of the film come not only from its atmosphere, but also Amirpour’s commentaries on life, culture (Iranian and American) and relationships. The Girl has the fewest lines of anyone in the film, yet her actions speak volumes, especially when she meets the drug dealer Saeed. (Trust me: it’s a scene you’ll never forget.) The Girl is more than a force meant to avenge the ill-treatment and abuse of women (although she certainly seems to represent that) and the atmosphere of the film allows characters who might normally be thought of as stereotypes – prostitutes, drug dealers, drug addicts – to rise above their stereotypes.

The hype surrounding Amirpour’s film runs the risk of disappointing audiences expecting one thing and getting another. It is not a traditional vampire film by any means, neither is it a traditional love story, a traditional western, nor a traditional film noir. It is partly all of those things, but the weakness of the film comes not from trying to tie together too many influences (or genres, for want of a better term), but from not delivering a tighter story. While all of the subplots and connections are interesting, they never come together in a completely satisfying way, which may leave some audiences disappointed.

Still, I believe the film is a must-see, especially for film lovers and those who occasionally want to see something a bit different. Although I experienced some disappointment with some aspects of the film, I plan to watch it again. A Girl Walks Home Alone at Night is currently streaming on Netflix.