Is The Fallen Idol a film noir? I’m not sure, but I am sure that it’s an exceptional film, one that often takes a backseat to Reed’s most famous work, The Third Man. I’m also beginning to think that of the two, The Fallen Idol may be the better film.

We’ve grown used to peering into the lives of the servants of royalty and the wealthy for many years with such TV shows as Upstairs, Downstairs (1971) and Downton Abbey, but in 1948, focusing on the behind-the-scenes problems of the hired help was quite uncommon. With The Fallen Idol, Graham Greene and Carol Reed change all that, making Baines (Ralph Richardson), the butler of a French diplomat, the focal point of the story.

A French ambassador and his wife are often away from the embassy, leaving young Phillipe – or Phile, as he is usually referred to (played by Bobby Henrey) – in the care of Baines and his wife (Sonia Dresdel). Baines is something of a substitute father to Phile, granting him the time that Phile’s father apparently can’t. Baines’s tales of hunting in Africa are meant only to amuse the boy, but Phile isn’t old enough to know his bulter is simply telling tall tales without an ounce of truth to them. 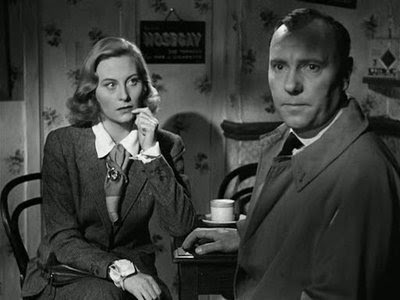 It’s not that Phile doesn’t know what a lie is; he does, as he tells lies to Mrs. Baines about his pet snake not being in the house. Yet when, the boy seems to wonder, is the right time to tell the truth and the right time to tell a lie? One day Phile wanders into town to discover Baines secretly meeting a young woman named Julie (Michèle Morgan), the embassy secretary. We know that Baines is having an affair with the woman, but the butler tells Phile that Julie is his niece, which Phile, of course believes, but Baines further tells him that their meeting will be “our little secret.” Phile knows a lot, but he’s still learning how the world – and the grown-ups in the world – works.

For much of the film, Phile is confined to the upper floor of the embassy, but we often see him watching the goings-on below from a safe distance. He also knows the house inside and out, as is made clear during a fateful game of hide-and-seek. Almost all of the film is from Phile’s point of view, as if he’s watching a stage play. In a way, we become Phile, regardless of our age. We see his world through his eyes and somehow – through that overused phrase “the magic of cinema,” which actually does seem to apply here – we lose ourselves in Phile, yet retain just enough of our adult consciousness to realize that we (and Phile) are on extremely thin ice.

As much as Baines is a focal point of the film, the long, winding embassy staircase is also a focal point. Staircases are normally locations of potential danger and foreboding in film noir and while The Fallen Idol may not fit neatly in the category of noir, its use of the staircase is crucial and effective. 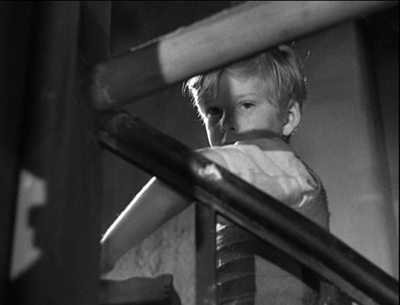 A tragic event occurs that could potentially wreck the lives of everyone in the embassy, especially Baines. From this point, The Fallen Idol moves from a very, very good film to one that could (and should) be considered a masterpiece. Everything that Phile has absorbed up to this point comes into play: his love for Baines, his ability (or inability) to sift truth from falsehood, the things he knows, and the things he suspects but doesn’t know. One of the film’s best moments is both dramatic and comedic as Phile escapes the embassy and wanders the streets at night, meeting a policeman and a prostitute, unsure which to confide in.

Yet the brilliance of The Fallen Idol comes from the labyrinthine back-and-forth dialogue, the masterful way Reed weaves adult conversations and Phile’s interruptions to enlighten and confuse. Phile is in no way prepared to handle this barrage of information, suspicion, questions and interrogations and we suspect that in his place, we probably couldn’t do any better.

We also know a lesson that Phile is just learning: all people are fallen, flawed, broken, and that’s often a hard lesson to learn as a child (or as an adult). Christianity tells us that we’re all fallen creatures in need of salvation and whether we’re Christians or not, we all arrive at this realization (or something like it) at some point in our lives. Phile probably doesn’t reach this level of understanding, but he does realize that Baines is not only in trouble, but may have committed an awful act, the worst possible of acts. How Phile responds and the thoughts that go through his head – conveyed brilliantly by Carol Reed onto the screen – make The Fallen Idol such a powerful film.

Sadly, the Criterion Collection DVD of The Fallen Idol is out of print, but I’m hoping that the film will get a Blu-ray upgrade soon.You can rent on Amazon and iTunes for $2.99 and find various DVD and Blu-ray releases in the UK, but none of them appear to be region-free. Check your local library; maybe you’ll find it for free.