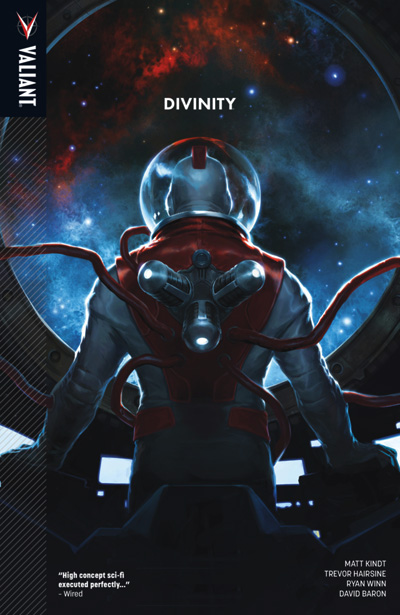 Before this year, I’d read very little from the Valiant universe, but after reading this title (my third Valiant book this year), I certainly want to read more. With Matt Kindt writing, I knew Divinity would be an intelligently-told story, one I’d want to read and re-read, and so it is.

In the midst of the Cold War, the Soviets plan and execute an extremely advanced mission, sending a man farther into space than anyone has ever traveled before. The man encounters an unknown force and returns to Earth, only to be mistaken for a deity. Or has he indeed become a deity?

Kindt has proven himself an outstanding storyteller and Divinity only expands the depth of his skills. Divinity is a rich, multilayered story that reminds me of the cosmic stories that Lee/Kirby produced at Marvel in the 1960s, not so much in execution, but in tone. The art is also incredible. Good stuff, Valiant… (trade paperback; color; teens and up) 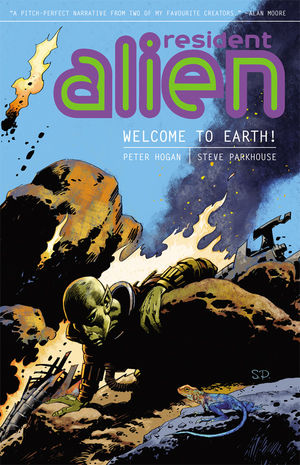 The concept is familiar if not well-worn: an alien lands on Earth, tries to pass for a human, has adventures, learns that we’re really not all that different, etc. You’ve seen it before. Yet Resident Alien has an undeniable charm that allows you to forgive some of its other sins, such as a solution to the book’s main mystery that’s not very satisfying. I’ll probably read at least the next trade. Worth a look. (trade paperback; color; teens and up) 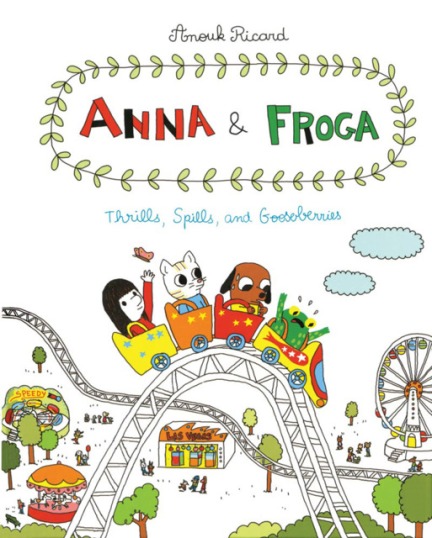 Although this is the third Anna & Froga book, it’s the first one I’ve read, but hopefully not the last. Anna is a young girl who has adventures with her friends Froga, Ron the mischievous cat, Christopher the earthworm, and Bubu the “sensitive artist” dog. The animals all bicker among themselves, but it’s good-natured banter filled with humorous adventures. The book contains three alternating formats: fairly traditional comic book stories, 3 to 4 panel strips playing on a single theme, and double-page spreads that look like sequences from a picture book. (You can get a nice sampling of those pages here.) The changes in format and the droll humor might take some time for kids raised on Disney and other franchise books to get used to, but do pick these up. They’re a delight! (hardcover; color; all ages) 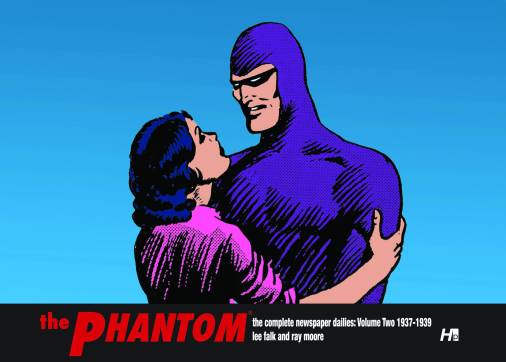 Was the Phantom the first costumed superhero? Yes and no. The Phantom predates Superman by two years (debuting in 1936), but has no superpowers. Much of his potency lies in his legend, which recognizes that the masked Phantom (or “The Ghost Who Walks”) has been alive for hundreds of years, meting out justice in the jungle wilderness. In fact, the Phantom is just a regular guy (although with impressive strength and intelligence) but maybe not so regular: this Phantom is the 21st in a line of many Phantoms, the particulars of which I will not get into right now.

The Phantom stories are great adventures and the character has been appearing in newspaper strips from 1936 to the present day. That’s quite an accomplishment. This collection (not the first, which has just been reissued) features all black-and-white art, simple without being simplistic. If you find any of these Hermes Press books in stores or online and are even mildly interested, buy them immediately. They vanish quickly and their value will skyrocket. I hope to give this (and other Phantom books) a much more in-depth review soon, so stay tuned. (hardcover with dust jacket; black-and-white; ages 10 and up)

One thought on “Graphic Novels Read in August Part I”