It’s important to note that of the five films included in the Columbia Pictures Film Noir Classics I set, 5 Against the House is the only movie without any supplements whatsoever. Maybe that’s because no one had much good to say about it, which makes you wonder why it was included as part of the set in the first place.

5 Against the House certainly contains noir elements (which I’ll discuss in a moment), but it really belongs in the category of heist pictures, a sort of precursor to Oceans 11 and films like it. As 5 Against the House opens, we see four college guys pulling up to Harold’s Club, a casino in Reno. They give themselves one hour to soak up the atmosphere and lose a little money along the way before heading back to school.

Right away we see that two of these guys – Ronnie (Kerwin Mathews, driving, far right) and Roy (Alvy Moore, second from left, who will forever be remembered as Hank Kimball from the TV show Green Acres) – are young and immature, typical college boys. The other two – Al (Guy Madison, second from right) and Brick (Brian Keith, far left) are decidedly more mature, in fact, veterans of the Korean War. (It’s never really clear why these guys hang out with Ronnie and Roy in the first place, which is one of many aspects of the film that don’t quite work.) It soon becomes obvious that Brick is interested in the ladies in general and Al is already locked onto a club singer named Kaye (Kim Novak, in one of her very early films) in particular.

For the first third of the film, we’re treated to stilted dialogue, meandering writing, and scenes of college life that must’ve felt dated even in 1955. After about a half hour, we finally reach the film’s premise: Ronnie and Roy concoct a plan to rob the casino. 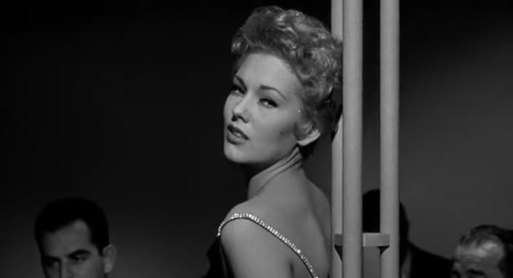 While Ronnie and Roy are knocking that idea around (mostly in jest), we learn that Al and Kaye are having relationship issues and Brick is in serious trouble: the war did something to him and he’s a psychological wreck. After Brick beats up a guy at a dance, Al urges Brick to see his doctor. Brick seems to get himself under control until something else happens and before we know it, the heist is no longer a fantasy. It’s going to happen.

As negative as I’ve been about the film up until now, 5 Against the House gets very interesting in its last half hour as we see Karlson at his best, showing us the heist as it unfolds with tight pacing, excellent tension, and crisp editing. Sure, most of what happens is completely untenable, but Karlson – the master of squeezing every ounce out of a trim budget – makes you believe what you’re seeing here in a way that you never did during the film’s first hour.

Also of interest is this shot that was imitated more famously 12 years later in The Graduate. 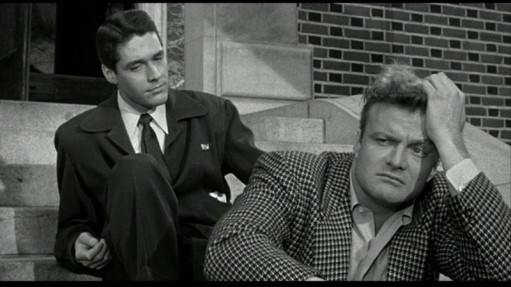 Brick’s disturbed war veteran character and the heist itself are the main elements that make the film eligible as an entry in the film noir category, yet it contains too many other elements that distract the viewer from really knowing what they’re getting into from the outset. That can be okay sometimes, but 5 Against the House contains an abundance of dialogue that wants you to think it’s a film noir, yet such dialogue on its own has a hard time standing up straight without collapsing. A line like “What are you shutting up about?” may work in a true noir setting, but in a well-lit college dormitory it just falls flat.

Although it’s the weakest film in the Columbia Pictures Film Noir Classics I set, 5 Against the House is certainly worth a look, especially for the heist scene and the final third of the film.