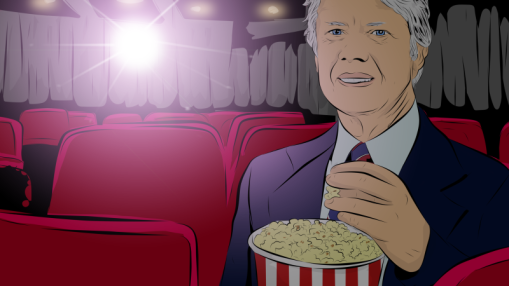 I ran across this article yesterday, “Every Single Movie That Jimmy Carter Watched at the White House” by Matt Novak for Paleofuture and was stuck by many things. First, that a President of the United States obviously made watching movies a priority. He watched over 400 films in just one term of office, which comes out to at least two movies a week. Heck, I can’t even do that and I’m just an average librarian with no kids and a movie theater across the street. I’m on the phone with people trying to renew their books, not world leaders.

Second, the broad range of films. Carter watched thrillers, sports movies, westerns, comedies, classics, horror, musicals, film noir, science fiction, James Bond films, the Marx Brothers, Capra, Wilder, Hitchcock, Scorsese, Kubrick, DePalma… Can’t you just hear Carter getting on the phone to his secretary, saying in his Southern drawl, “I think we’d like a John Ford picture tonight.” Or can you imagine the President watching Caddyshack, shouting “It’s in the hole!” And what I wouldn’t give to have been in the same room with Carter and Egyptian President Anwar Sadat viewing Star Wars…

Third, that Carter as a professing Christian (and I have no cause to doubt his faith), again, watched such a wide variety of films. As a Christian, I understand the reasons why many fellow believers don’t watch a lot of movies they might find objectionable. No Christian (or anyone else for that matter) should watch anything that they feel would be wrong for them to watch; I understand that. But I also understand that much truth can often be found in films by directors and producers who have no faith in God. (That’s another topic for another time.) Yet Carter didn’t seem to shrink away from any type of film. It is rather telling, however, that he followed a viewing of Bo Derek’s 10 (1979) with a viewing of Jesus (1979) the very next day.

I celebrate this list and thank Novak for providing us a look at the movie life of President Carter. Novak is currently working on movie lists of other Presidents. This inspires me to do a better job of keeping my own list. But at least I don’t have to worry about the State of the Union while doing so.