I guess I just can’t stay on task… My original plan was to watch horror movies exclusively during the month of October, alternating between modern horror and classic horror. As mentioned in a previous post, that plan fell through.

Althought I did watch several horror films – most of which you’ll see here, but also some in Part II – I also found time to step away from the scary stuff. More next time, but for now, here’s Part I:

A group of college students venture out to the deep woods to find a remote cabin where they summon… You guessed it, the evil dead. Raimi’s early film is a low-budget affair, but he gets a lot of mileage out of very little with some gore and a few laughs.

With a larger budget this time around, Raimi delivers a wackier, gorier film that’s just plain crazy fun. Bruce Campbell gets into his role with much more reckless abandon than he displays in the first film. 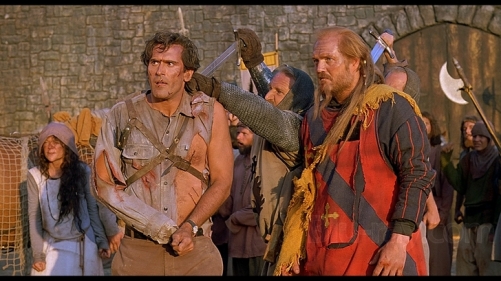 Ash (Bruce Campbell) has just plain had enough. If you’ve seen the film just before this one, Evil Dead 2: Dead by Dawn (1987), you know that Ash has been transported to 1300 A.D. where he must fight the army of the dead and find the Necronomicon in order to return home. And he’s mad enough to kick some medieval butt, living or dead.

If none of this makes sense, it doesn’t matter. Leave your mind somewhere else and simply enjoy the madness that is Army of Darkness including magic, cloning, swords, fair (and unfair) maidens, a chainsaw, and non-stop mayhem. Not as satisfying as Evil Dead 2, but still fun.

Corman’s second Poe project (after House of Usher) is something of a slow burn, but thanks to Vincent Price’s performance, much can be forgiven. Englishman Francis Barnard (John Kerr) journeys to a Spanish castle to investigate the death of his sister (Barbara Steele) after her marriage to the caste’s owner Nicholas Medina (Price). Wonderful weirdness ensues. Corman may have been low-budget, but the castle and its atmosphere are creepily effective. Screenplay by Richard Matheson.

I won’t say I hated this film, but I came pretty close to it. I’m okay with cardboard characters in horror films and said characters making stupid decisions over and over. I’m even okay with clichés and obviously telegraphed “gotcha” scares. What bothers me is the level of talent here – both in front of and behind the camera – that was largely wasted. All those things together equals (at least for me) a big let-down, but the ending of this film just killed any possibility of a favorable review.

Off the Map is one of those films you’ve probably never heard of, but should. Young Bo (Valentina de Angelis, in her first role) is only 11-years-old, trying to grow up in the New Mexico desert with a mom (Joan Allen) who gardens in the nude and a father (Sam Elliott) who, because of his depression, can’t hold a job.

Enter a young IRS agent (Jim True-Frost) who’s investigating the family for failure to pay their taxes. None of their lives will ever be the same, but probably not in the way you’re thinking. Directed by Campbell Scott, incredible performances (including one by J.K. Simmons) and a quietly strange coming-of-age vibe make Off the Map worth seeking out.

Through his entire insane career, my favorite Terry Gilliam film remains the sf/dystopian thriller 12 Monkeys. With a film this good, I’m not even sure why we need a TV show based on it, but it’s out there if you want to see it. This viewing – selected by my friend Patrick – was my third time to see the film and I haven’t tired of it yet.

Bruce Willis plays James Cole, a “volunteer” from a disease-ridden future sent back to the past to prevent the outbreak of a virus that wiped out most of the world’s population in 1996. But Cole arrives too early in 1990 Baltimore, where he’s immediately forced into a mental institution after telling everyone he’s here to stop the virus and find out about the twelve monkeys. (I think that’s still standard operating procedure in Baltimore…) Dr. Kathryn Railly (Madeline Stowe), on of the institution’s doctors, thinks there’s more to Cole than his mad ravings suggest.

The film – based on the 1963 short French film La Jetée – also includes a great performance by Brad Pitt as one of the institution’s inmates. (His performance also follows the *Brad Pitt Hair Formula Rule: short hair = good movie; long hair = bad movie.) 12 Monkeys is a wild dystopian sf noir thriller that requires you to think, and while it may not be his most popular film, it might just be his best.

One thought on “Movies Watched in October 2015 Part I”