I hope you’ll find something of interest in the list below. Happy reading! 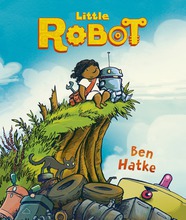 Ben Hatke is a wonder. So is his new book Little Robot, the story of a young girl and a robot who accidentally find each other and true friendship. Hatke’s Zita the Spacegirl series also included robots and other mechanized characters, and while Little Robot lacks the outer space setting, the book is just as thrilling and satisfying. Gwen and I discussed the book on the October show of the Young Readers edition of The Comics Alternative Podcast. (hardcover; color; all ages)

Out on the Wire: Uncovering the Secrets of Radio’s New Masters of Story with Ira Glass (NF 2015) Jessica Abel (Broadway Books)

Abel takes readers through the process of creating several of the most popular current narrative radio shows such as “This American Life,” “RadioLab” and more. Yet the book is far more than an exploration of radio narratives and how those shows work. The principles and concepts apply to all types of creative narrative structures, if not all creative activities period.

Abel has also launched a podcast that explores these concepts even further. Derek and I interviewed Abel recently on The Comics Alternative Podcast. You can listen to our discussion here. (trade paperback; black-and-white; teens and up)

Craig Thompson has created two of the finest graphic novels in the history of the medium, Blankets and Habibi. I suppose that has something to do with Space Dumplins being such a disappointment. There was probably a good story in here initially with young Violet and her parents trying to make a good life for themselves in outer space, challenged by her dad’s dangerous job, her mom’s work and class prejudices. Yet Thompson squeezes in way too many other elements that distract from the story, such

as issues of religion, the environment, consumerism, social consciousness, and literally saving the whales, to name a few.

Kids might enjoy the book’s many puns, but will surely be confused by all the adult pop culture references. The art – while often fantastic – is just too busy and sometimes frantic, leading to a reading experience that literally tired me out. I hope that Thompson finds his way again with his next project. I have my fingers crossed. (trade paperback; color; ages 8 and up)

It just doesn’t get much better than this: pirates on the Chesapeake Bay in the 19th century, fighting, adventure… But this is far from your typical pirate adventure. These pirates are all about disrupting the oyster trade for themselves, but they’re really after something that could give them unlimited power.

It’s all here: an engaging story, wonderful characters filled with life, gorgeous artwork and spectacular coloring. Towle’s hardcover print edition of his webcomic is a beautiful package in itself, resembling an oversized European comics album. A really handsome book that readers of just about any age will enjoy. (hardcover; color; ages 10 and up) 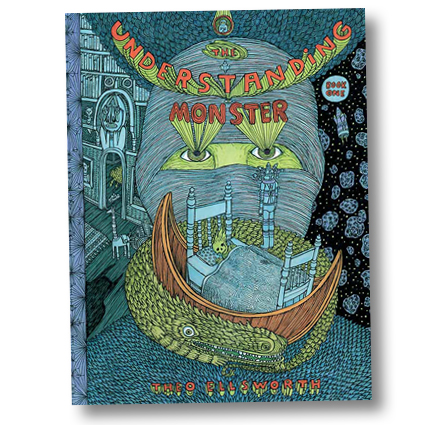 I’ll be honest: I don’t understand very much of what’s going on inThe Understanding Monster: Book One. Much of that has to do with reading it late one night and not making the connections Ellsworth has in mind, but the artwork is indisputably brilliant. I hope to read this one again soon (and not late at night). (hardcover; color; teens and up)

Just what the title says, although the title doesn’t tell you how much fun you’ll have reading the same one-page story told 99 different ways in various styles with differing narrative techniques. While you’re having fun, however, you’ll learn a lot about narrative styles, regardless of the medium you’re working in. You’ll also gain a better appreciation of comics and how they’re structured. (trade paperback; black-and-white; teens and up)

Tezuka remains a phenomenon in Japan and should be everywhere. Astro Boy – the first manga to be adapted for animation many years ago – is pure, joyous fun. Not only are these stories about a robot boy entertaining, they also contain underlying issues of depth. Tezuka’s artwork is absolutely brilliant in its execution with a very approachable style. If you’ve never read manga before, have no fear – you’ll enjoy this. The second omnibus from Dark Horse will be out in December 2015. (trade paperback; black-and-white; ages 8 and up)

The Dumbest Idea Ever! (YA 2014) Jimmy Gownley (Scholastic/GRAPHIX)

Gownley’s The Dumbest Idea Ever! is the best possible type of memoir: one that tells us what Gownley’s life was like as a kid learning to draw comics and inspires the reader to do something as well. The book is funny, touching, and inspirational in the best possible way.

I’ve read several of Fawkes’s works for adults, which can be quite dark, so I had some reservations about how dark this graphic novel for young readers might be. I was pleasantly surprised that Fawkes injected so much humor and feeling into this first volume. I highly recommend this as a good “scary” (yet also funny) title for younger readers and look forward to reading more from the series. (trade paperback; black-and-white-and-green; ages 10 and up)

Gorgeous art makes this wordless aspect of this book a little less challenging, but the story could be taken in several different ways, which perhaps is a strength and not a weakness. Definitely worth picking up. I hope to see more from Daishu Ma. (hardcover; pencil drawings with yellow and blue; all ages)

Hereville: How Mirka Got Her Sword (YA 2010) Barry Deutsch (Amulet Books)

This book about Mirka, an 11-year-old Orthodox Jewish girl, is a wonderful, imaginative tale of fantasy, adventure, and culture. I’ll have more to say about the book when Gwen and I discuss it and the other two Hereville volumes on an upcoming Young Readers edition of The Comics Alternative Podcast. (hardcover; color; ages 10 and up) 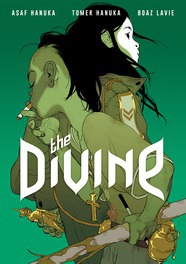 One of the strangest books I’ve read this year, The Divine combines fantasy, wonder, horror, heavy-handedness and sometimes extraordinary beauty. Like many other readers, I’m not sure I understand exactly what’s going on, but I’ll definitely revisit the book. The Divine won’t be for everyone, but it’s bold challenges make it worth a look. (trade paperback; color; teens and up)

Norwegian creator Jason’s books – something of an acquired taste – are always a fun read and these collected short stories consist of hilarious tales, interesting looks at culture, and some real head-scratchers. “Night of the Vampire Hunter” – a takeoff on the famous film noir The Night of the Hunter – is probably my favorite, although the JFK story borders on genius. (Hardcover; color; adults)

That’s it for last month. Please let me know what you read.

(All photos from the publishers)