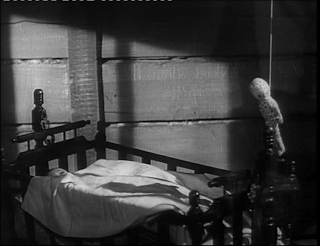 Young Danny Hawkins is constantly tormented by other boys his age, but the reason has nothing to do with anything Danny did. No, it’s because of Danny’s father, who was hanged as a murderer. After an opening which is equal parts surreal and nightmarish, we aren’t sure what to expect next: Salvador Dali, Southern gothic noir, or both.

If the bizarre opening scenes don’t clue us in to the fact that Danny is totally messed up, maybe we need a little taunting in the form of another little boy named Jerry Sykes, who gleefully torments young Danny. As both characters grow into young men in a small, unnamed Southern town, Jerry (Lloyd Bridges) still taunts Danny (Dane Clark, below right). This time Danny’s had enough, but before he can sate his anger, he’s killed Jerry. (This must be Lloyd Bridges’s shortest screen appearance ever.)

Although from this point, the plot of Moonrise may come across as somewhat predictable, how it’s delivered is certainly full of surprises. Yes, Danny spends much of the film trying to flee from being discovered as Jerry’s killer and we’re always mindful of that, but many of the individual scenes are both exceptional and unexpected.

After the murder, Danny seeks companionship and stability in the form of a young schoolteacher named Gilly Johnson (Gail Russell, above right). Yet Danny grows uneasy around two men he’s known for years, a local deaf mute simpleton named Billy Scripture (Harry Morgan, below center) and Mose (Rex Ingram, below left), a local hunter who lives in the swamps. Both of these characters could easily have been written and portrayed as stereotypes, but we’re pleasantly surprised to discover they contain quite a bit of depth. Both characters also know something about Danny that he desperately wants to keep hidden and we aren’t sure if Danny can trust them. Also getting a little too close to the truth is local sheriff Clem Otis (Allyn Joslyn), who looks like he stepped out of the Old West. (The film also includes a brief appearance by Ethel Barrymore, probably the last person you’d expect to see in a film set in the South.)

Moonrise is one of the strangest film noir movies I’ve run across, yet its strangeness only adds to its allure. John L. Russell’s cinematography is filled with some wonderful noir moments, the greatest of which occur inside a dilapidated Southern mansion. But also give director Frank Borzage credit for many visually striking scenes, including Danny jumping from a moving Ferrris wheel. 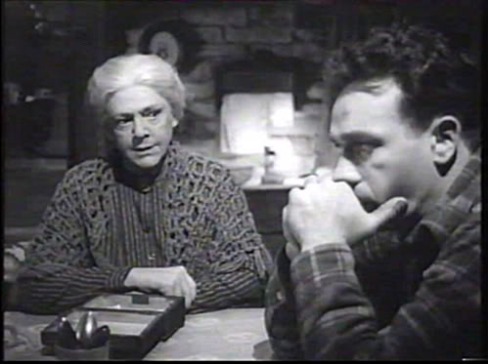 Borzage was an important silent film director (winning the first Best Director Oscar in 1927 for Seventh Heaven) who was highly influenced by German director F.W Murnau. I don’t know for certain, but it seems that outside of film noir circles, most people either don’t know about Moonrise or have forgotten about it. It was one of Borzage’s final films (making only three more after this), but one that should certainly be seen by everyone who loves classic films, and not just film noir fans. If you have Amazon Prime, you can watch it for free. And you should.