I don’t know if Appointment with Danger was intentionally meant to be funny, but much of it is. Yet the film certainly has its serious moments and falls clearly into the crime/noir categories (often leaning more towards crime than noir). 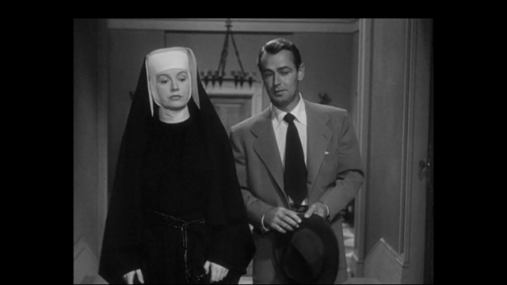 We start off with another of these quasi-documentary openings, which must’ve been getting tired by the time this film was released in 1951. The U.S. Postal Service is lauded to the skies (using footage of real postal workers? I don’t know…), when WHAM! – a Postal Inspector in Gary, Indiana is murdered during the robbery of a postal truck. Another U.S. Postal Inspector, Al Goddard (Alan Ladd, above right), is sent to investigate. His first clue leads him to a young nun named Sister Augustine (Phillis Calvert, above left), who witnessed two men acting suspiciously just before the robbery. One of the criminals is shot, but the surviving crook Joe Regas (Jack Webb) is the nervous type, fearing that the nun can identify him. (This adds more humor to the film. Regas is worried for nothing; the nun never saw him, yet he digs himself deeper and deeper into a hole, believing that she did.)

So we’ve got Jack Webb (above left) sweating like a marathon runner in July and a detective team consisting of Alan Ladd and a nun. How can you help but laugh? But Ladd’s Al Goddard is a hard-nosed type of guy, which we already know if we’ve seen any of Ladd’s other films. Goddard successfully (and easily) infiltrates the gang that pulled off the robbery, a group headed up by Earl Boettiger (above center, played by one of my favorite character actors Paul Stewart; Stewart usually plays a smart, cynical bad guy, but Boettiger’s pretty much a dope). Goddard is determined to bring these guys down. 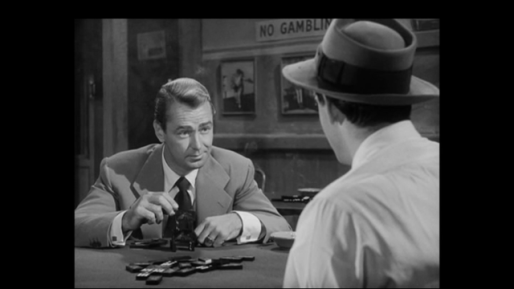 Appointment with Danger is equal parts serious noir and humor. How those things mix without spontaneous combustion occurring, I don’t know, but it works. I chuckled at Jack Webb’s paranoid performance, Ladd’s tough talk, scenes of bad guys and good guys poring over detailed plans and maps, and Goddard and another criminal having a conversation underneath a NO GAMBLING sign in a place where gambling is clearly going on. But the scene that literally caused me to laugh out loud is one that somehow slipped by the Production Code: Goddard is alone with Dodie (Jan Sterling), Boettiger’s girl, when the two clearly have intentions for one another and begin to embrace…

Goddard: “You already have.” 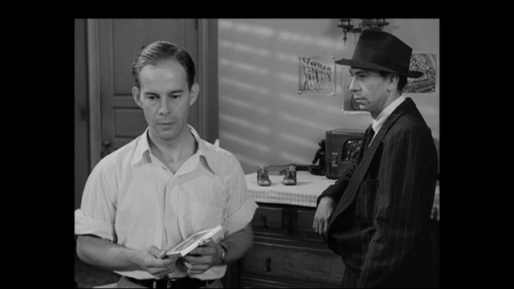 The film also features Harry Morgan, who has a brief tussle with Jack Webb, a scene that’s pretty hilarious considering that the two would star in the hit TV show Dragnet 16 years later. A lot can happen in 16 years…

(Photos: screenshots from my phone)