It’s always difficult keeping up with new titles while trying to catch up on comics you’ve missed  from previous years. Huge gaps remain in my comics reading, some of which I attempted to correct this year. Plus, there are always a few books from recent years that demand your attention. So here are the books I enjoyed that were not published in 2015: 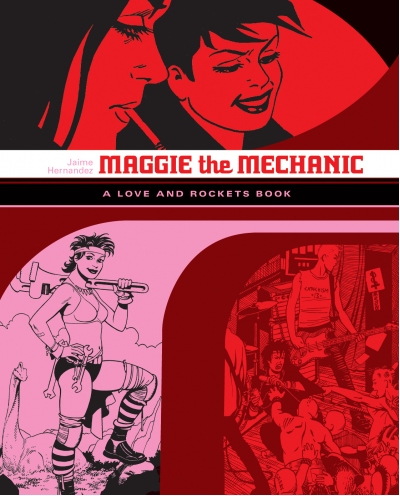 Maggie the Mechanic: A Love and Rockets Book (1981 and beyond/2006) Jaime Hernandez (Fantagraphics)

For years I’d wanted to start reading Love and Rockets from the very beginning and now I’ve taken that first step. Maggie the Mechanic introduces us to Maggie (an actual mechanic) and her best friend/lover Hopey, who plays in a punk band. In fact this collection weaves in and out of the punk scene, science fiction, Latino culture and more, but primarily these stories are all about relationships, relationships so rich and layered that you’ll be amazed. And the artwork by Jaime Hernández is spectacular. This first volume from Fantagraphics collecting the early Maggie and Hopey stories is from all reports the best way to go through the Love and Rockets universe. (trade paperback; black-and-white; adults) 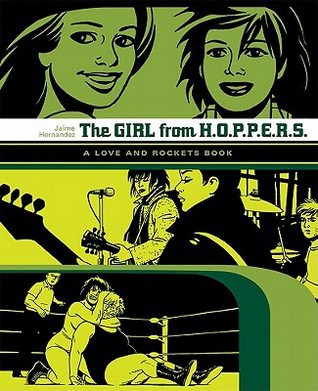 I’m not sure what you can say about Love and Rockets that either hasn’t already been said or would require something on the level of a dissertation, but the series is spoken of in tones of reverence and awe for a reason. The absolute richness of character and storytelling is simply unsurpassed in comics history. This second volume of the Maggie and Hopey stories delves deeper into character without sacrificing great storytelling, but does require the reader to make jumps in time and narrative, which only makes you want to read them again. Although this is only my second Love and Rockets volume to read, I know this is a world I want to lose myself in more in the coming years. (trade paperback; black-and-white; adults) 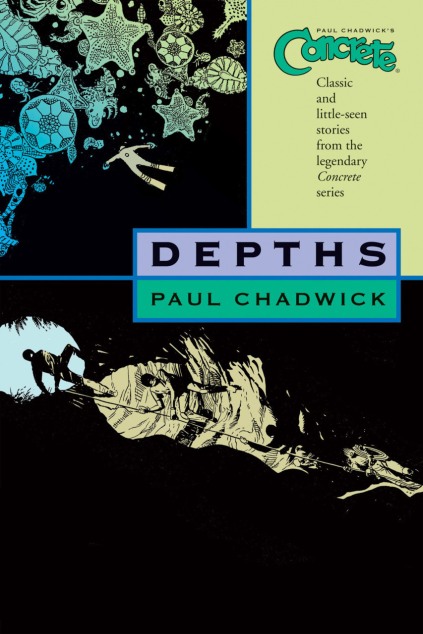 Ron Lithgow is a man whose brain was removed by aliens and placed in a rock-like body standing seven feet tall. If this sounds like a wacked-out space adventure, it’s not. Beyond its initial premise, Concrete contains almost no science fiction elements, other than the physical and emotional problems presented by having a 1,000-pound body made of rock. Chadwick takes the reader through humor, sadness and social commentary without a heavy (dare I say it, concrete?) hand. Other than a few references, this black-and-white comic from the 80s does not feel dated in the least. If you missed this comic back in the day, you can catch up on all the Concrete tales in seven trade paperbacks from Dark Horse. (trade paperback, black-and-white; teens and up)

Set in the final years of Germany’s Weimar Republic, Berlin: City of Stones focuses on several characters’ interweaving stories, but primarily those of journalist Kurt Severing and art student Marthe Muller. The book is filled with ordinary people and events under the constant influence and threat of approaching fascism. Lutes is a tremendous artist and storyteller. (trade paperback; black-and-white; adults) 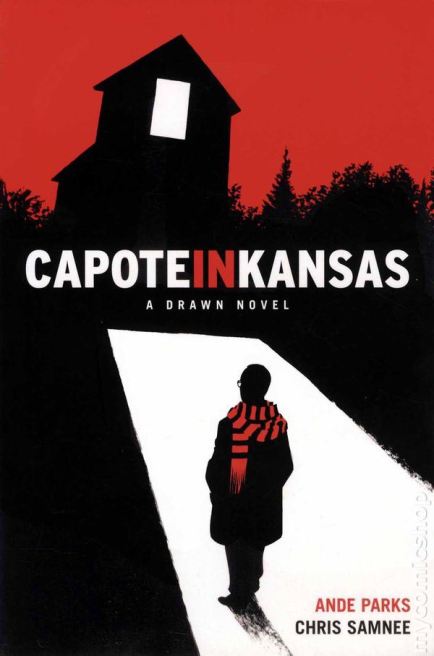 Truman Capote’s In Cold Blood became a sensation when it was published in 1966 and filmed in 1967. I remember when I was in high school ten years after the book and movie, people still spoke about the story in hushed voices. Capote in Kansas is less about the murders and killers and more about Capote, how he tried to get the full story while attempting to fit into a place he clearly didn’t belong. Parks and Samnee capture this beautifully (in stunning black and white) by showing us Capote as he struggles through this strange landscape of rural Kansas, trying to get to the truth while struggling with ghosts of his own, those of the killers, and those of the victims. It’s a shame more people haven’t discovered this graphic novel. It’s a winner. (black-and-white; mature teens and up) 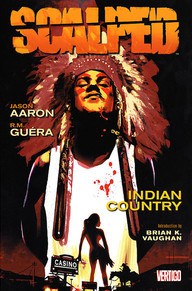 Jason Aaron has written many books over the years, some of which absolutely knock me out. This is one of them. R.M. Guérra’s art is absolutely mind-blowing in its depiction of the darkness of the human heart. Read more about it here. 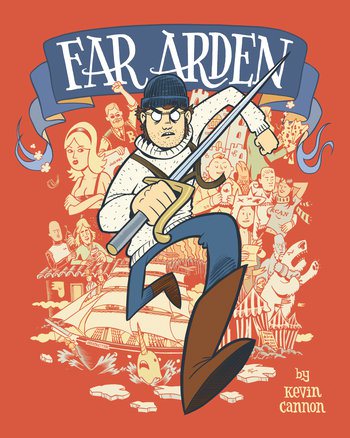 Crusty sailor Army Shanks is obsessed with finding the mythic island known as Far Arden, although just about everyone he encounters either outright denies its existence or warns of its dangers. Before Shanks can reach Far Arden, he’ll have to go through a series of strange (and often hilarious) adventures featuring college students, an old flame, polar bears, the Royal Canadian Arctic Navy, and more. Totally unpredictable, Far Arden is one of those epic adventures that you didn’t know existed. The combination of humor, adventure and sadness makes for a unique reading experience. Highly recommended. (black-and-white hardcover; mature teens and up) 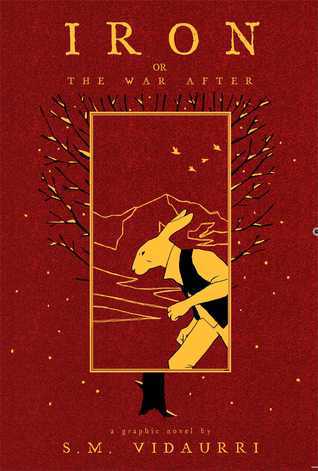 I picked this book up several times at SPX, wondering whether or not I should get it. I could tell the book was beautifully produced with no dust jacket, but instead gorgeous cloth-covered boards with gold lettering and gold and black art. Just flipping through the pages, the art astounded me.

What’s inside is just as compelling. Iron: Or, the War After is a complex tale of the aftermath of war and the people (actually anthropomorphic animals) caught up in the intricacies of espionage resulting from war. The incredible artwork is matched with a story made powerful by its minimalism. I’ll definitely revisit this story and seek out more of Vidaurri’s work. (hardcover; color; teens and up) 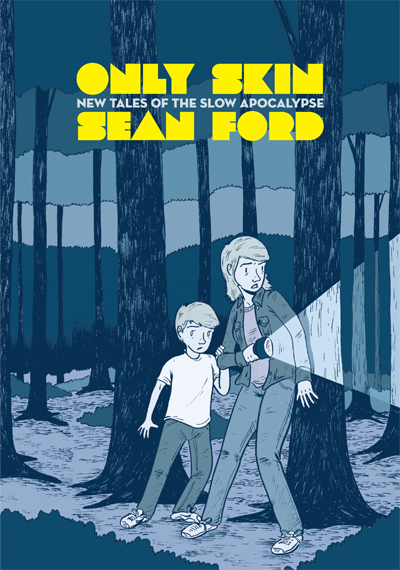 I was so engaged with this book I read it in one sitting. Only Skin is a missing persons story with several relationship dramas being played out with a sort of weird Twin Peaks vibe, which is the type of thing that turns my dials all the way up to 10. I got to read more of Ford’s work at SPX, where I also met him – a really nice guy. I’ll definitely read more of Ford’s comics in 2016. 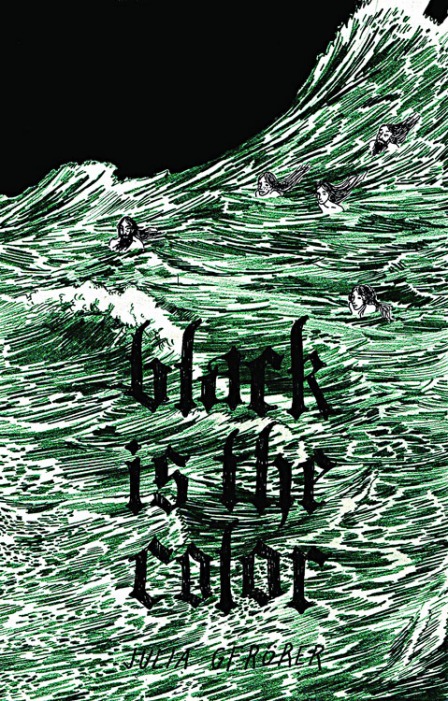 Although Derek and I reviewed the webcomic version of Black is the Color, I’m including it here since it has been published in book form. (The print version is difficult to find, but the Fantagraphics rep I spoke to at SPX said the book will be reissued in the near future.) You can read the webcomic version here then listen to Derek and me discuss the title here. Black is the Color is much more than a story of sailors and mermaids; Gfrörer’s work is filled with beauty, nuance, subtlety, and grace. Please check it out in either format. (black-and-white trade paperback; adults) 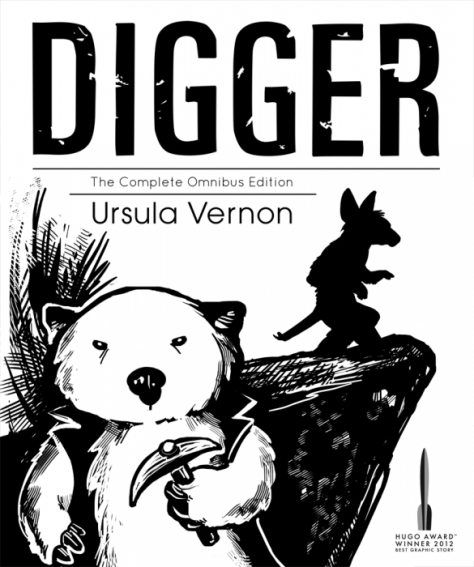 A wombat, adventure and philosophy. Seriously. Derek and I explored this massive work – which is also a webcomic – on the April edition of The Comics Alternative webcomics show. (black-and-white; teens and older) 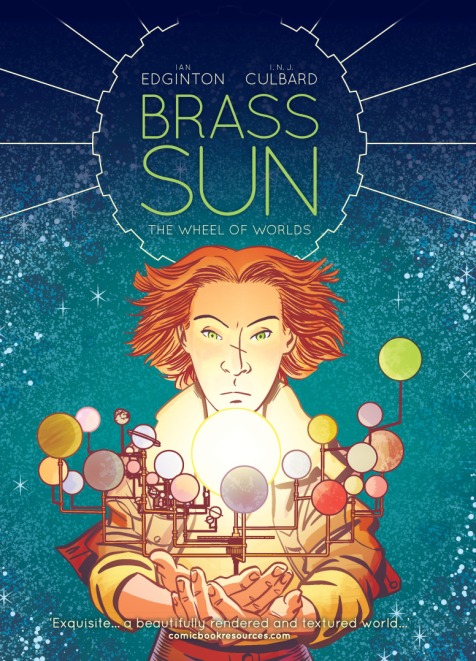 A young girl’s father reveals the secret of their home world: it isn’t the only world, but just one in an entire solar system of clockwork worlds. But her world is dying and only she can save it. Edginton and Culbard do a fantastic job of world-building in Brass Sun: The Wheel of Worlds. The story is engaging, the characters well developed, and the art as wonderful as we’ve come to expect from the prolific Culbard. My biggest complaint is that the volume’s ending and resolution seem very rushed, but hopefully there’s a lot more story to tell in the coming volumes. (hardcover; teens and older)

I simply do not understand why more people aren’t talking about Concrete Park. Maybe it’s because the concept seems too familiar, or maybe because it’s slipped under the radar of most comics readers. I hope it’s not because of its character diversity, which is something we need more of in comics, not less. Diversity certainly isn’t the only reason to read Concrete Park; the main reason is that it’s such a great story.

So what’s this great story about? Criminals and outcasts from Earth are exiled to a desert planet, to a place called Scare City, a city with a complex structure of gangs and gang lords. To make things even more interesting, Scare City contains shapeshifters, people who can get themselves out of trouble and place others in trouble, and with lots of gangs around, that’s some pretty serious trouble. As you might imagine, Concrete Park focuses on themes of slavery, identity and much more.

Puryear and Alexander – both screenwriters – give Concrete Park a vibrant, full-throttled pace that never lets up, yet provides us with interesting characters who’ll stay with you for a long, long time. This is an amazing book. Do not miss it, and when you’ve finished it, tell someone else about it. (hardcover; color; adults)

(The creators have posted a very informative study guide online.) 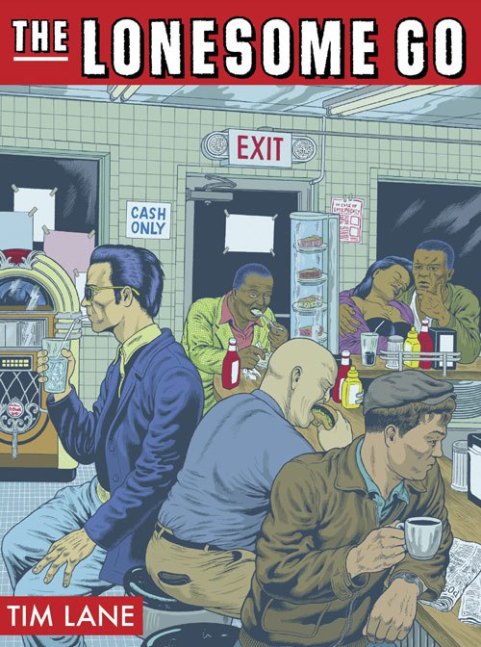 An existential road trip, hobos in boxcars, dark nostalgia… Think film noir, Tom Waits, the Beat Generation, and the always-present search for meaning. A very mature title that won’t be for everyone, but for those it connects with, it will probably become a treasured classic. (trade paperback, mostly black-and-white; adults only) 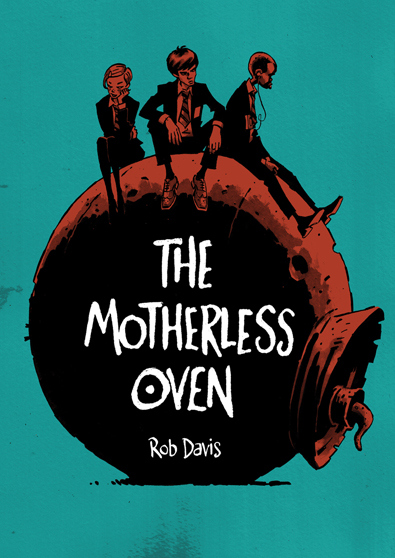 I heard a lot of hype about The Motherless Oven last year and for once, the hype was justified. The book is very British and very odd, yet contains enough of the normal as not to be completely off-putting. In this universe, parents don’t make kids, kids make parents. Sort of. You know you’re not reading any paint-by-numbers graphic novel (It’s in black-and-white anyway…) when the opening shows a rainstorm of knives. If you’re dying for a plot, here goes: three teenagers skip school to see what the world is really like, even though one teenager’s “death day” is quickly approaching.

I could tell you more, but I won’t. If you decide to take up the challenge of reading The Motherless Oven (and you should), be prepared not so much to try and figure it all out, but to simply enjoy the ride. Certainly a graphic novel worth re-reading and exploring the worldview within. (trade paperback; black-and-white; teens and older)

That’s it: the best of my “Not Published in 2015” graphic novels. Please share yours in the comments section!