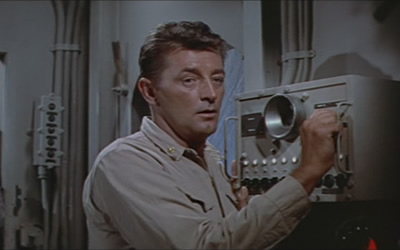 The crew members of the Navy destroyer escort U.S.S. Haynes are a bit nervous. They’re patrolling the South Atlantic during World War II with a new commander, Captain Murrell (Robert Mitchum) who has confined himself to his cabin since coming aboard. Several of the sailors wager that the new captain’s seasick. Or maybe just yellow.

But this is Robert Mitchum, an actor who – as far as I know – never played a scared weakling. Even after Captain Murrell emerges from his cabin and shows some pretty amazing decision-making skills when tracking an unidentified ship, several crew members are still uneasy.

What makes The Enemy Below so compelling is that we get to see both sides of the conflict. The commander of the German sub (Curt Jurgens) is just as smart and resourceful as Murrell, perhaps more so. But he has fears and doubts as well. The enemy here isn’t painted as a horrible force of evil so much as men who think they’re doing the right thing, trying to end the war and get home.

There’s also a feeling of understanding between the two commanders that comes across in interesting ways. We learn that the freighter Murrell commanded before the war was sunk by the Germans, killing his wife and family. Murrell says to one of his officers, “This isn’t my private war. I’m just doing what I have to do, like that German captain out there. I don’t like the job, but maybe he doesn’t, either.”

The cat-and-mouse game between the Navy destroyer and the German U-boat looks great and provides plenty of tension. Sure, we’ve seen much more flashy effects during the past 60 years, but The Enemy Below still delivers some impressive scenes. (The film won the special effects Oscar in 1958.) We’ve also seen the same plot and themes many times since. (I’m reminded of the Star Trek episode “Balance of Terror,” which is practically the same story in outer space.) Yet here the situation works, mostly due to some excellent performances by Mitchum and Jurgens.

The film also contains some interesting supporting players, including Theodore Bikel, Frank Albertson, a young baby-faced Doug McClure, and an uncredited Darryl F. Zanuck as a Chief. Dick Powell also directed Mitchum in Powell’s next and last film as a director, The Hunters (1958).

1957 was obviously the year of The Bridge on the River Kwai, a film so powerful it sometimes tends to dominate all other WWII films from that year. Yet The Enemy Below is a film that shouldn’t be forgotten, boasting some excellent performances, exciting scenes, great effects and impressive direction from Dick Powell. (And I’ll bet you thought all he could do was film noir…)

I watched The Enemy Below from The Robert Mitchum Film Collection. The DVD looked okay, and although the audio was pretty good, a Blu-ray release would certainly be welcome. I believe the only Blu-ray of the film is a Japanese Blu-ray, but if anyone knows of another, please comment.