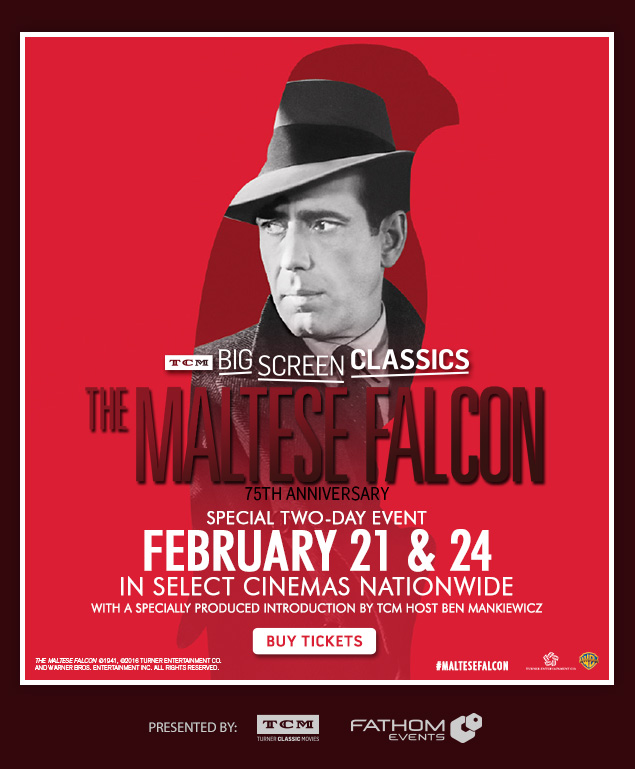 I figure I’ve seen The Maltese Falcon (1941) at least 10 times, but last night was the first time I’d seen it on the big screen (at the Annapolis Harbour 9 as part of TCM’s 75th anniversary of the film, delighted to be joined by my friends Dana, Patrick, and Karen). You’d think the screen size wouldn’t make that much of a difference after having seen the movie so many times, but the revelations were stunning.

The Maltese Falcon holds a special place in my film-watching experience. My mom used to watch tons of old movies on TV, so much so that I made fun of her and those films when I was a brash, stupid teenager. I guess she finally got tired of my snide remarks, so she challenged me to watch just one film. I agreed to watch The Maltese Falcon and afterward confessed to her that I was indeed an idiot of the highest order and the only way to remedy my lowly estate was to watch more classic films. (Which I did and continue to do.) 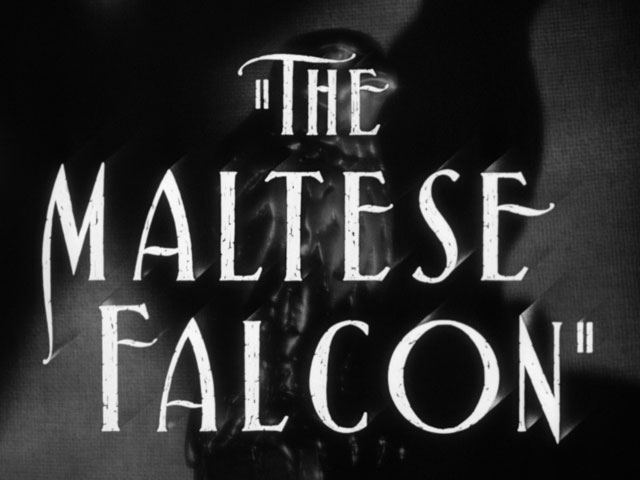 I’ve always been a little in awe of the original Warner Bros. musical introduction featuring the big WB shield front-and-center, the fanfare blaring away, a crescendo pushing us to an image of a gigantic black statue of the falcon itself, lit from the bottom left. The statue and its shadow dominate the screen like an enormous idol, which in many ways it is. On the big screen, the imposing nature of the image is inescapable, as if the black bird could easily overwhelm its audience.

The credits begin and you mostly forget about the image of the falcon until the film’s final act. The black bird is talked about throughout the movie and when it finally emerges, the level of suspense is practically unbearable. You could actually think of the statue’s first real appearance in the film as one of the greatest reveals in screen history. (You have to wait longer for it than you do for the shark in Jaws.) Yet its appearance (spoilers here, for a 75-year-old film!) is a let-down in size and authenticity, which adds to the overall nature of the film and its characters. 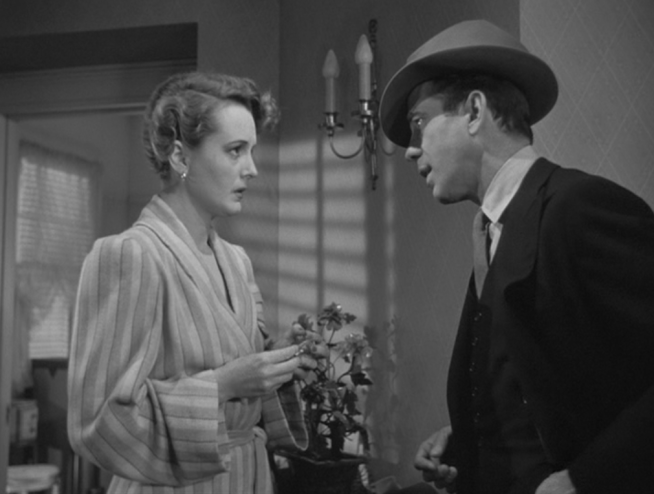 Several other things struck me about seeing the film on a large screen. First, I never really realized how marvelous the Adolph Deutsch score is. Deutsch wrote dozens of film scores, but he’s someone I never really noticed much before. The subtle changes of character, scenes where Bogart grins all of a sudden, moments in which Brigid is probably lying, but we’re not exactly sure which parts are lies, the scenes with Wilmer, the appearance of Captain Jacoby…

Perhaps the most devastating use of Deutsch’s score comes near the end of the film when Spade tells Brigid how it’s going to go down. She’s frightened, then thinks Spade is kidding, until she realizes – with a nice touch from Deutsch that provides just the right amount of foreboding – that it’s all over. This is a wonderful score that doesn’t overtly bring attention to itself, but in a theater, where the sound surrounds you, you realize just how good it is. 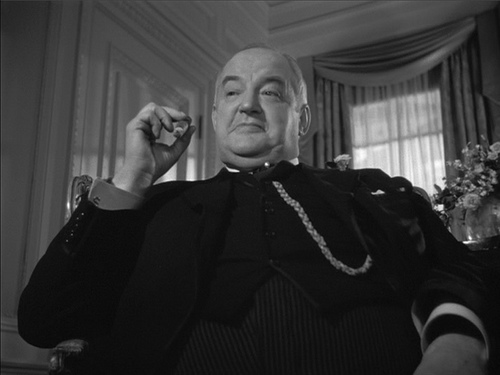 Second, the enormity of Sydney Greenstreet. Watching the film on video for all these years, I always noticed how John Huston shot many of Greenstreet’s scenes from below, showing us the massiveness of the man. It always seemed a bit comic watching that on my TV, but in the theater, Kasper Gutman becomes such an imposing figure you feel trapped in a way you never did in your own living room. 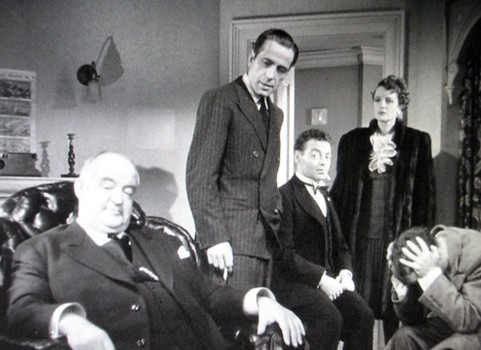 You also quickly begin to realize how good these actors are. The larger screen is able to show you the subtle facial expressions, the minute eye movements in a way you’d probably miss on home video. I used to think Mary Astor was the weak link in what was otherwise a stellar cast, but in the past few years I’ve realized I was wrong. Brigid’s lies are so well executed visually and her concealment of facts that could ruin her are amazing. Just watch her in Sam’s apartment as she’s trying to spin out another pack of lies while trying to communicate to Joel Cairo what not to tell Spade. Yet it’s Bogart whose expressions are most heightened on the big screen. We can practically see what he’s thinking, see the wheels turning as he takes in Brigid’s lies, listens to Gutman’s tales, sizes up the cops that won’t leave him alone, and tries to put off Iva Archer. Plenty of people think The Maltese Falcon features the greatest cast of all time. I tend to agree with them. On a large screen, the evidence is even stronger. 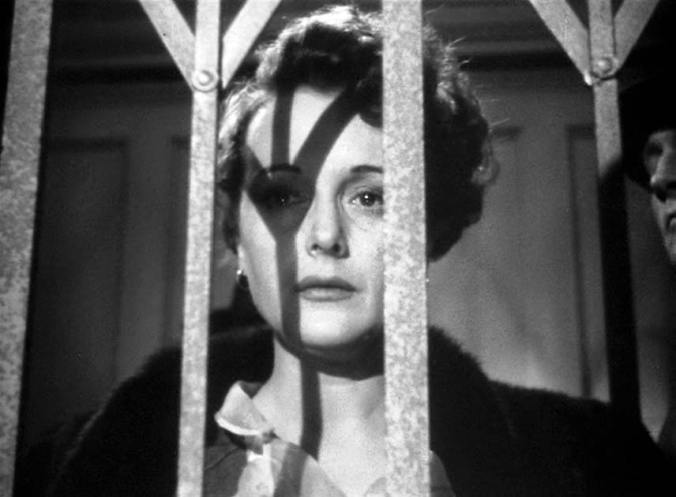 The final shot in the film is one of my favorites. Brigid is being taken into the elevator by the cops and we see the barred door of the elevator closing on her (as obviously the jail cell bars will soon do). She’s in the elevator, going down as if she’s descending into hell, while at the same time, Spade walks down the stairs. They’re going in the same direction; he’s just going to take a little longer to get there.

Last night’s showing also featured an introduction and afterword by TCM’s Ben Mankiewicz. Thanks to TCM and the Harbour 9 Theater for making this 75th anniversary of The Maltese Falcon possible. It’s showing again nationwide on February 24, so check your local theaters and don’t miss this classic film.