If you’re late to the party, you can catch up on Part I and Part II. After that, here’s how April ended for me:

Previously discussed here as part of my David Lynch Project

My mom used to complain that every time she turned on Turner Classic Movies they were showing Key Largo. She didn’t like the fact that almost the entire film takes place inside a hotel, but that didn’t bother me. I think the film is close to John Huston perfection. Humphrey Bogart plays former Major Frank McCloud, who visits the hotel in order to meet the family of George Temple, a man who met his death in WWII by serving under McCloud. George’s widow Nora (Lauren Bacall) and his father James (Lionel Barrymore), the hotel owner, are glad to see McCloud. They’re also getting tired of the lowlifes renting the hotel now that the winter season is over. But James and Nora can’t exactly get rid of them; they’re a group of thugs led by Johnny Rocco (Edward G. Robinson), waiting for an approaching hurricane to pass so they can flee the country.

The more I watch the films of John Huston, the more I realize what a master he was. Everything about the film works: the pacing, the setting, the camera angle choices, everything. Bogart is excellent in a role that’s quite different for him: for a long time we aren’t sure if he’s a hero or a coward, but his scenes with Robinson sparkle. Claire Trevor won a Best Supporting Actress award for playing Rocco’s alcoholic girlfriend. The scene where he makes her sing for a drink is hauntingly unforgettable. If you’re a fan of film noir and haven’t seen Key Largo, buy the Warner Archive Blu-ray immediately.

Want more Bogart and Bacall? Here you go. This is one to get lost in, and not in a bad way. The Big Sleep, famously adapted from Raymond Chandler’s classic hardboiled detective novel by William Faulkner, Leigh Brackett and Jules Furthman, is a film that has so much legend attached to it, you can easily get lost in the story behind the story. (The disc also includes the original 1945 version, a comparison of the two, and an explanation of why there are two versions. Trust me, it’s fascinating.)

I won’t even attempt to summarize the plot of the film, which is notoriously confusing, but well worth the effort. In fact, I’d recommend not even worrying about the plot, but simply watching the wonderful performances, cinematography and style of the film, a true classic of film noir.

Roger Ebert named Mississippi Burning the best American film of 1988. If he were alive today, I wonder if he’d make the same statement. Alan Parker has never been the most subtle of directors, yet it’s astonishing to see the amount of restraint he practices in the film. (If you think it lacks restraint, just see some of Parker’s other films, such as Midnight Express, Angel Heart, or Pink Floyd The Wall.)

The story involves FBI agents Alan Ward (Willem Dafoe) and Rupert Anderson (Gene Hackman) investigating the disappearance of three civil rights workers in Mississippi in 1964. Based on actual events, Mississippi Burning is effective in many ways, especially in its handling of period details, but more so in its performances. Dafoe and Hackman are excellent as is Frances McDormand, whom many audiences were probably seeing for the first time (although this was her fourth film).

What doesn’t work quite so well is the “odd couple” relationship of Ward and Anderson. It’s made clear that these two agents see things very differently with Ward thinking he understands the Southern culture and Anderson actually coming from it. The conflict and tension inherent in the relationship works on some levels, but Parker seems to stir up the problems too often with mixed results. The racism, as we might expect, is up close and frequent and just as frequently stereotyped. The ending – for a 2+ hour film – seems rushed and ultimately unsatisfying. 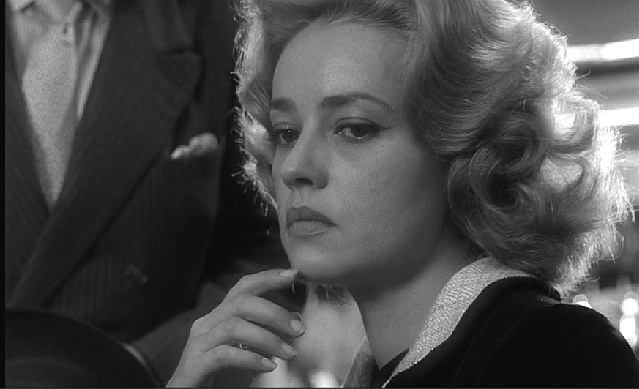 I’ll keep it brief, although I could expound on Malle’s first film for pages. This pre-New Wave noir/thriller could really work in any era, but being set in Paris with a Miles Davis soundtrack immediately gives it a feel that probably wouldn’t work quite as well in other contexts.

A man named Julien Tavernier (Maurice Ronet) decides to murder his boss, a rich industrialist, and then run off with the boss’s wife Florence (Jeanne Moreau). During his escape, Tavernier gets stuck in an elevator while Florence anxiously awaits his return. Meanwhile, a young man (Georges Poujouly) decides to steal Tavernier’s car and assume his identity, heading out to the countryside with his girlfriend (Yori Bertin).

This brief summary doesn’t do the film justice. Some critics have called Louis Malle the Quentin Tarantino of his generation, based largely on this film. It’s a fair comparison: Malle captures the moodiness, the unleashed style of camerawork, the stark performances, and the pacing of what could certainly be thought of as a forerunner of the French New Wave (although many differences would emerge from that period). The story itself is simple, but what Malle does with it is complex, imaginative and exciting. If you can put yourself in the mindset of audiences of the time, thinking about what films were like at the time, you’ll see how much Elevator to the Gallows is telling audiences that something different is coming, something that’s going to take cinema in a new direction.

Man in the Middle (aka The Winston Affair) (1964) Guy Hamilton
The Robert Mitchum Film Collection DVD (1:34)

Man in the Middle was the last film Guy Hamilton made before stepping into the world of 007 with Goldfinger (1964), a film he will always be associated with, and for good reason. Hamilton, who passed away last month at the age of 93, also directed three other James Bond films: Diamonds Are Forever (1971), Live and Let Die (1973), and The Man with the Golden Gun (1974). Before the Bond movies, Hamilton made several films based on military stories including Man in the Middle, the tale of an American Army officer Lt. Winston (Keenan Wynn) who kills a British soldier while stationed in India during WWII.

It’s an open and shut case. Eleven soldiers witnessed the killing, so there’s no doubt as to Lt. Winston’s guilt. Both British and American forces are stationed in India and tensions are running high. Winston’s going to hang and everyone knows it. Heck, everyone wants it, Brits and Americans. But Winston still needs a defense attorney. Why not call in Robert Mitchum?

Mitchum plays Lt. Colonel Barney Adams, who steps off the plane looking like a fish out of water with his walking cane and sleepy eyes, wondering all the while why he, and not someone more qualified, has been chosen to defend Winston. After an initial conference with Winston, Adams believes Winston might be insane, but no one in a position of authority will back him up. Or will they?

Man in the Middle certainly could have been a good film. The topic of capital punishment and the insanity plea still causes lively debate these days and the film presented a prime opportunity to seriously explore such issues, but it ultimately fails. Mitchum is as sluggish as he looks, using his cane for support (maybe that’s the point; if so, it’s way overdone) and trying to sound tough, but no one in the film (or the audience) is convinced. France Nuyen as a nurse is wasted in several contrived and amateurish scenes with Mitchum, which are disappointing and sometimes downright painful. Adams’s search for evidence quickly becomes burdensome and we can see exactly where the film is going. Thankfully Trevor Howard is on hand to give a sarcastic and ultimately sobering performance as a British psychiatrist.

Many people who know Rod Serling only from The Twilight Zone and Night Gallery know that he wrote many of those classic episodes, but may not know that he had a great career writing teleplays before those shows aired. Serling wrote for Westinghouse Studio One, an anthology television show that ran from 1948 to 1958, featuring some stellar writing, acting, and directing. This was live television, far different from the shows we see today. If you think television from this era was hopelessly primitive, you’ve never seen these shows. But you should. 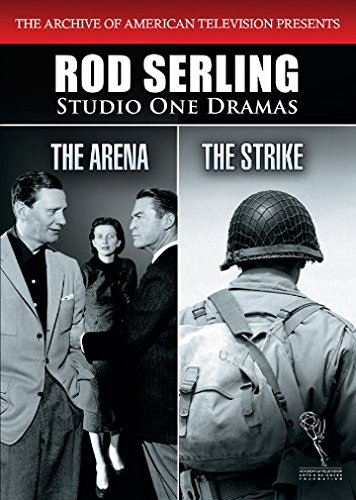 Two Serling dramas are presented here: “The Arena,” the story of newly-elected freshman Senator James Norton (Wendell Corey) who’s driven to bring down the senior Senator from his home state, a man who helped end the career of Norton’s father. In “The Strike,” a US Army major (James Daly) in the Korean War must give an order that will result in the death of 20 of his men in order to save hundreds more. Both films are directed by Franklin Schaffner (Planet of the Apes, Patton), both are well-written, both are powerful. A 17-episode DVD anthology is available, but if you’re interested, you might want to start with these two Rod Serling dramas.

The plot of Don’t Bother to Knock may be improbable, but it’s one of those films that you simply can’t stop watching. A young woman named Nell (Marilyn Monroe) takes a babysitting job in the hotel where her Uncle Eddie (Elisha Cook, Jr.) works as an elevator operator. Meanwhile airline pilot Jed Towers (Richard Widmark) is having troubles with his girlfriend, a bar singer named Lyn (Anne Bancroft, in her first screen role). After an argument, Jed discovers Nell in the room across the way and invites himself over for a drink.

What happens next borders on the improbable, but by this time, we’re too captivated to care about the story’s believability. Widmark is good (as always), but this is arguably Monroe’s finest work as a complex character we see slowly developing and unraveling. Don’t miss this one.

Along with Part I and Part II, that’s what I watched in April. Let me know what you watched.