“Odd” is a word that no doubt comes up frequently when discussing anything related to David Lynch, but a G-rated David Lynch movie produced and distributed by Disney gives odd a whole new meaning.

It gets more odd… 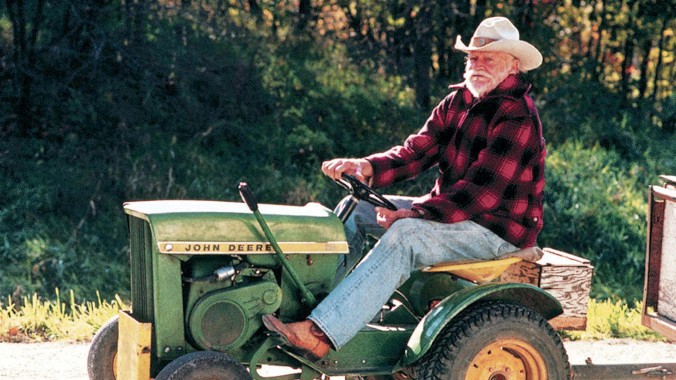 Yet the plot is very straightforward (especially for Lynch): an elderly Iowa man named Alvin Straight (Richard Farnsworth, above) drives his John Deere lawn tractor 240 miles to visit his ill brother in Wisconsin. (The film is based on a true story.) Not exactly the stuff of Blue Velvet or Eraserhead, right? No, you won’t see Dennis Hopper as a crazed fertilizer salesman or a three-headed calf dancing inside a radiator or anything even remotely strange (other than the film’s basic premise, of course). But we do get to see a side of Lynch that we’ve never before seen or only glimpsed from afar.

The film contains unmistakable Lynch touches, especially early on. The film’s opening of a quiet, peaceful house in the country recalls the picket-fence/Americana opening of Blue Velvet. Like that film, there’s also something very wrong here, but it’s nothing as horrific as a severed ear: Alvin Straight has fallen on floor inside his home. Alvin’s daughter Rose (Sissy Spacek, above right) helps him up and tells him to get himself to a doctor, who tells Alvin he needs to give up smoking and use a cane. Soon Alvin learns that his brother Lyle has suffered a stroke. Although he hasn’t spoken to Lyle in 10 years due to a fight, Alvin is determined to visit him. Of course Alvin can’t see well enough to drive and no one can take him. (He wouldn’t let them, anyway.)

No one thinks Alvin’s driving a lawn tractor 240 miles is a good idea. A local businessman tells Alvin he always considered him a smart man. Until now.

You might think that The Straight Story would primarily be played for comedy. The comedic element is unmistakably present, as are the usual quirky Lynch characters (although they’re a bit more down-home here than they normally are with Lynch), but there’s something here that Lynch has never approached, at least not like this. Alvin has more than health problems haunting him and we learn more about this as the journey unfolds. Alvin’s adventures bring him into contact with other people also having problems and it’s here that we see Alvin’s years and wisdom peeking out from underneath the exterior of an old man who may be falling apart, but is doggedly determined to complete his journey.

I don’t want to tell you much more about the film itself, but I do want to talk about Lynch. My friend K and I both wondered so many things after we’d finished the film: What possessed Lynch to make it? Why such a different story that seems so out of character for him? Or is it that much different from his other works? What K and I both agreed on was the level of kindness in the film that’s absent from Lynch’s other works. Or perhaps the kindness is there in other films (Jeffrey in Blue Velvet, Dr. Treves in The Elephant Man), but is clouded by evil or the threat of evil. There’s no real evil in The Straight Story, not even anyone we could call a villain, unless you count age and dangerous hills. Most everyone in the film seems kind and willing to extend a helping hand, even to an old dude driving a lawn tractor on the highway. I’m not sure if Lynch is saying that we all have the capacity of goodness inside of us or that we should have that capacity and try to use it every chance we get.

Alvin Straight is clearly the focus of the film and as we learn what motivates him to make this journey, we also learn what a tremendous character he is. He might just be the most complex, unexplored, least-discussed character in all of Lynch’s body of work. Give credit to Richard Farnsworth for a stellar performance, made even more impressive when you consider that the actor was terminally ill with bone cancer while making the film. He really needed the canes and the stumbles he took in the film were probably real. Farnsworth – a former stuntman who took character parts later in life – accepted the role out of admiration for the real Alvin Straight and was nominated for an Oscar for his performance, the oldest person (at 79) to be nominated for a Best Actor Oscar. The pain from bone cancer, however, became too much for Farnsworth. He took his own life in 2000, one year after the film’s release. The Straight Story was his final film.

The Straight Story is the most approachable film David Lynch has (yet) given us. A six-year-old can understand it, but it also contains great depth that resonates long after the film is over. The film and Farnsworth’s performance stand as lasting treasures.