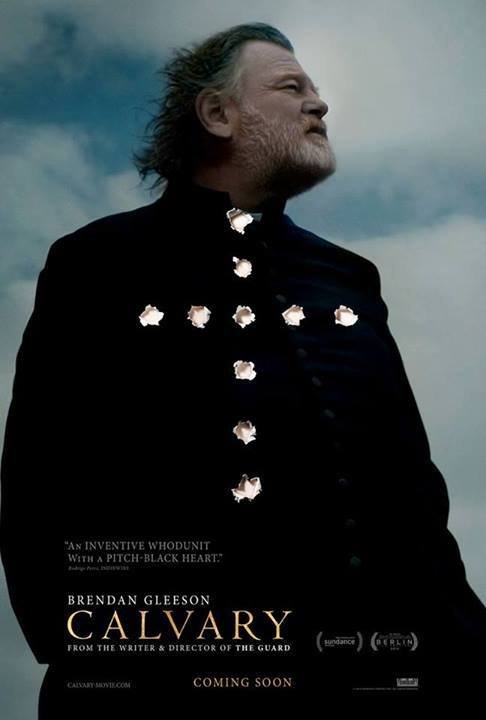 (This film was recommended to me by my friend Ann G.)

Father James Lavelle (Brendan Gleeson) hears many confessions in his remote Irish seacoast village. One Sunday he hears the confession of a man who was sexually abused as a child by a priest who has long since died. The man informs Father James that he’s taking his revenge out on him, that he will, in fact, assassinate the priest in exactly one week, although he knows that Father James is innocent, a “good priest.” The man even tells Father James when and where this killing will occur so that he can set his house in order. 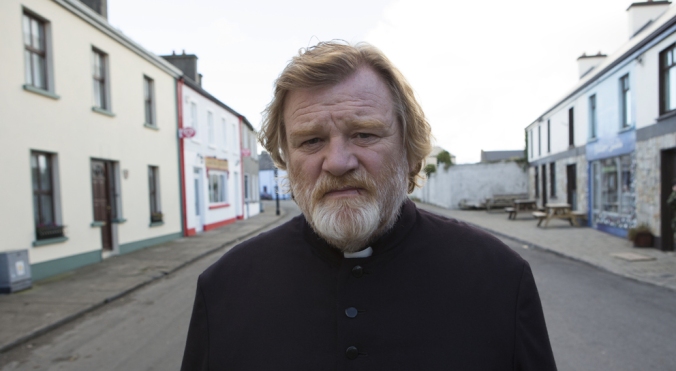 With an opening that recalls films like High Noon (1952), Calvary is primed to set itself up as a race-against-time thriller, but McDonagh’s interest lies elsewhere. James is clearly disturbed by this death threat, but he doesn’t run to the local authorities to ask for protection. He goes about his business as he has always done, seeking to shepherd his flock. Such an approach in the face of danger (or at least the threat of danger) is admirable, but we soon learn that his flock could really care less about their spiritual needs or even James, for that matter.

James encounters a promiscuous woman named Veronica (Oria O’Rourke) who’s trying to hide a black eye which could have been delivered either by her husband, the local butcher (Chris O’Dowd, above left), or her latest lover, an African auto mechanic (Isaach de Bankole). Neither man wants to hear accusations or rebukes about their sins from Father James, and neither does Veronica. It’s none of his business.

Other members of the village might give Father James the time of day, but that’s about the limit of what they’re willing to give him. They certainly don’t give him much respect. The villagers know that his adult daughter Fiona (Kelly Reilly, above right) was born before James ever became a priest, when his wife was still alive, but they treat him as if he’s violated a statute they don’t even give credence to themselves.

In fact, no one hides anything from Father James. They aren’t ashamed and they don’t care. A local  atheist doctor (Aidan Gillen) frequently challenges James, the police chief and his male prostitute companion have nothing to hide, a rich snob tries to convince James that nothing in this world really matters, not even his money. The list of characters goes on. The way McDonagh takes James (and us) from character to character feels contrived at times, as if Father James is forced to have a one-on-one encounter with each of his parishioners. Although not done in an obvious way, in each of these scenes we’re constantly asking ourselves, “Could this be the person who threatened the priest in the confessional?” Some have suggested that in each of these visitations, James is simply (or not so simply) going through the fourteen Stations of the Cross.

Yet in the midst of all this tension and conflict, there’s more than a fair amount of comedy. Dark comedy, to be sure, but comedy nonetheless. Neither we nor Father James have forgotten the death threat from early in the film, but the focus is primarily on James and the people around him. I won’t tell you how the film ends. Maybe you can guess and maybe you can’t, but what I’ll keep thinking about isn’t the denouement itself, but rather the film’s final shot.

Calvary has so much going for it (including an absolutely brilliant performance by Brendan Gleeson) that I highly recommend it not only as a film, but as an opportunity to discuss quite a few topics. Although set in Ireland and not the U.S., Calvary reminds us that Christianity is becoming less and less a relevant part of our culture. I say this as a Christian because I see it happening more and more each year. Some of the lack of respect for the church (and I am speaking not only of the Catholic church, but all Christian churches) is, no doubt, the fault of the church itself, not only in its abuses (which are the focus of the film’s confessor in the opening), but also in how it is sometimes not Christ-like. The church has done a lot of wrong because churches are made up of sinners, fallen people. Many of them are trying to do the right thing, some of them after having made egregious errors and sins of their own. But churches – and the individuals in them – who confess Christ, who put their trust in him and seek to live a life that’s Christ-like, who seek to genuinely love and care for everyone (and I do mean everyone) are out there, even if our numbers are shrinking. They/we try. Sometimes they/we stumble and fall. Yet sometimes those people make a difference. One of the characters comes to Father James late in the film, seeking relief, forgiveness or both. All is not lost.

Calvary shows us a village that represents the world in all its brokenness, unbelief, fear, hatred, confusion, and vulnerability. It shows us that we’re not perfect and neither are the Christians of this world. But it also shows us that a grace that we never would have imagined is possible and perhaps closer than we think.