Last night marked the six-month (oops – actually seven-month) anniversary of our Great Movies series at the Severna Park Library and it was our largest crowd yet: 45 people in attendance. For the first time, we had people arriving quite early, asking when we were going to open the doors. Ten minutes before the movie started, we had more than half the seats filled.

Last night’s feature was Alfred Hitchcock’s Shadow of a Doubt (1943), a film that many admitted to never having seen before. Before the movie, I discussed how this was one of the films that helped define what we think of when we think of Hitchcock: not only close-ups of faces filled with terror, off-setting titled camera angles, and the significance of shadows, but also – especially in the case of this film – the concept of danger appearing in a place or a person we had come to believe was safe and harmless. How frightening to realize that such a thing is now more relevant than ever… 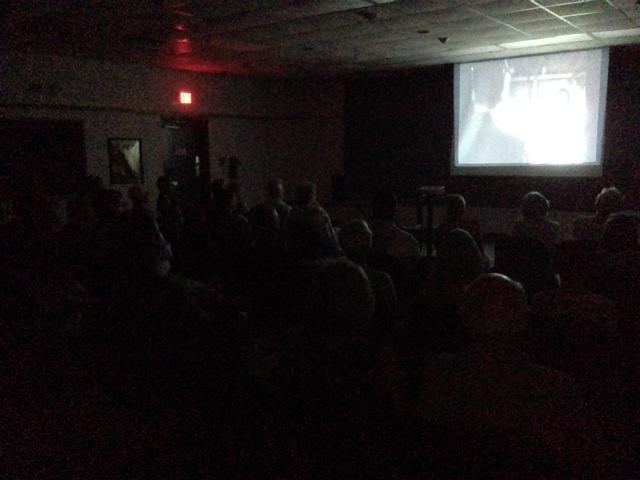 I continue to be astounded at how these showings are developing a sense of community. Even in an area such as ours, in close proximity to two major cities, most people have never seen classic films on a large screen in a group setting (unless they go to a revival house or a film festival). The Great Movies audience has developed a core group of dedicated followers, yet still brings in new people each month, which is very exciting.

Also exciting is watching how people react to these films as a group. They laugh as Henry Travers and Hume Cronin discuss the best ways to murder themselves, they gasp when Teresa Wright as Charlie walks down the stairs with the emerald ring clearly visible to the eyes of her Uncle Charlie, and they sit in stunned silence at Joseph Cotten’s famous dinner table speech about fat, wealthy widows. These shared experiences are priceless as are the insightful comments and questions posed after the films. My coworker Julia and I greatly look forward to The Great Movies every month. If you live in the area, I hope you will join us as well. Information about our next feature on August 4 at 6:30pm can be found at our website.