If you missed Part I and Part II, follow the links. Here’s how I wrapped up July’s movies:

I’d almost forgotten I watched this on vacation with my brothers-in-law. Not bad; total popcorn movie. I have already forgotten most of it, so there you have it.

More on this one coming soon

Previously discussed here as part of the Kino Lorber box set Film Noir: The Dark Side of Cinema 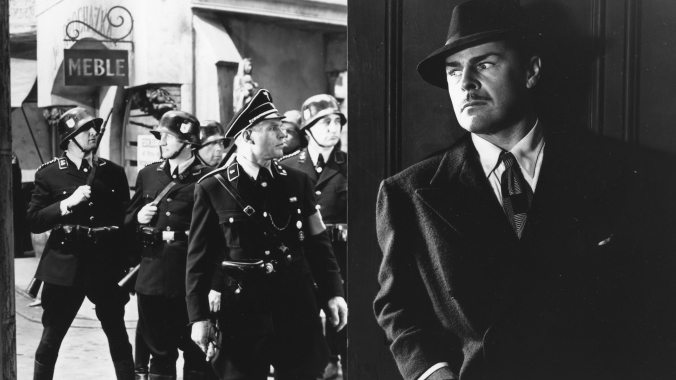 Was Hangmen Also Die! meant as a propaganda film or just wartime entertainment? Some of both, I suspect. Fritz Lang’s tale (co-written with Bertolt Brecht) takes place during the Nazi occupation of Czechoslovakia during WWII. Someone has just assassinated Nazi Reinhard /Heydrich (Hans Heinrich von Twardowski) and the remaining Nazis turn the place upside down trying to find the assassin, unconcerned with how many innocent people they may kill in the process. Overall good performances and many good scenes, but the film is too long, largely due to many scenes that accomplish the same thing. The film stars Brian Donlevy, Anna Lee, and something you don’t see every day: Walter Brennan as a history professor.

I know I really shouldn’t unload on this movie. I know many people love it and I feel bad that my friends loaned it to me because they love it, but this one’s just not for me. I suppose I just don’t like Christopher Guest’s films (I also didn’t like Best in Show). It’s not that I don’t get the humor; I do, I just don’t like it. Part of that may stem from the fact that I have never thought Eugene Levy was funny.

The plot: in the fictitious town of Blaine, Missouri, an eccentric community theater director (Guest) convinces several local residents that they should put on a production that might just lead them to Broadway if he can convince a famous Broadway producer Mort Guffman to attend a performance.

Again, not for me. The high point was seeing Brian Doyle-Murray in a cameo role.

I missed The Player when it was released in 1992, but after reading Robert Altman: The Oral Biography by Mitchell Zuckoff, the film was high on my “Must See” list. This part noir, part Hollywood expose shows why Altman was a master and very much his own director, unlike anyone else in the business. This film deserves a closer look, which I can hopefully give it soon.

Much more to say about this one as well, this first (and probably the best) pairing of Humphrey Bogart and Lauren Bacall, which eventually led to their marriage. (He was 45, she was 19, but hey, who’s counting?) For all practical purposes, this is something of a retread of Casablanca, with Bogart playing a boat-for-hire captain who takes would-be fishermen out for a bit of fun. Things change when Bogart gets involved with members of the French Resistance. A retread it might be, but the film stands just fine on its own and the Bogie/Bacall team was never better. Screenplay by Jules Furthman and a guy who knew a little bit about writing, William Faulkner.

So tell me what you watched last month.