The most powerful moment in Scarlet Street occurs near the end of the film when the meek, clueless Christopher Cross (Edward G. Robinson) realizes he’s been duped by the woman he thinks is in love with him, Kitty Marsh (Joan Bennett). That scene is also one of the greatest in film noir because it shows us the essence of noir in microcosm: the dumb, disillusioned everyman who’s been played for a sucker, realizing too late that everything he’s done in pursuit of his dream amounts to absolutely nothing.

If that paragraph sounds like a spoiler, well then, so be it. You simply must watch Scarlet Street if you’re a fan of noir. Along with Detour (which I discussed recently) and a handful of other films, Scarlet Street should be an essential part of your “Introduction to Film Noir” class. You’ll have no street cred until you’ve seen it, but relax: it’s easy to find.

The premise is simple: an older man (Robinson, above right) falls for a much younger woman (Bennett, above left) without knowing what he’s getting into. Christopher Cross (please, no “Sailing” jokes) has just come from a party where his 25-year career as a cashier has been celebrated by his friends and co-workers. It’s a nice gesture, but it’s been a dull 25 years, filled with boredom and routine. Chris’s only joy in life is painting; there’s certainly no joy in his marriage to a shrewish, disagreeable woman (Rosalind Ivan). Coming home from the company party, Chris encounters a man assaulting a woman and immediately does something he’s probably never done in his life: knocked a man down. The man escapes and Chris is proud to have rescued this damsel, a beautiful woman named Kitty (Bennett). 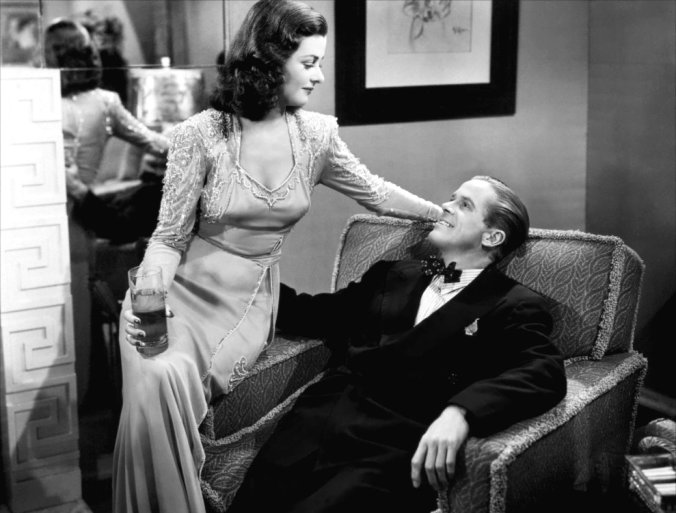 Chris is instantly smitten with Kitty, but she sees Chris only as an easy mark. Due to the Production Code the film can’t come right out and say it, but the man who was assaulting Kitty (clearly a prostitute) earlier is Johnny Prince (Dan Duryea, above right), a guy who is obviously Kitty’s pimp. He encourages Kitty to pump Chris for all he’s got, but when he learns Chris is a painter, Johnny gets an idea that works beyond his wildest dreams.

Chris finds himself in an absolute nightmare from which there is no escape. Welcome to film noir, Chris, you sap.

The film was shot almost totally on sound stages, which works for many reasons. The tight, enclosed spaces add to the tension of Chris’s dilemma, but the sets also convey artificiality and fakery, concepts that are important to making the film work. Everything is recognized as a facade, Chris’s job, his marriage, everything. In many ways, the concept of fate that was explored in Detour picks right up here in Scarlet Street: fate is out to get you and there’s not a thing you can do about it. But there’s more to it.

Chris wants beauty in his life. In fact, he’s starving for it. He paints, seeking to create beauty and also to escape. He also wants beauty (and escape) in the form of Kitty, but he’s married. Both painting and Kitty are attempted escapes from the reality of Chris’s life: he’s worked 25 years as a cashier and lived with a constantly nagging wife for probably just as long. Scarlet Street instantly calls us to identify with Chris: is there anyone who hasn’t longed to do or create something meaningful, anyone who hasn’t ached for beauty in some form or another? Yet Chris’s painting is a (mostly) healthy escape from reality; Kitty, a dangerous one.

When it’s all said and done, everyone in Scarlet Street is guilty of something. Kitty and Johnny are used to that situation. Chris is not. They know something that he doesn’t, they have something that he doesn’t and never will. I think the idea that Kitty and Johnny – by the end of the film – remain “together,” so to speak, is what torments Chris just as much (perhaps more) than what he’s done. Does every character ultimately act out of selfish desire? Or is it something else? I’ll let you chew on that and decide for yourself.

Critic Dennis Schwartz stated in his review that Scarlet Street marks the first Hollywood film that showed a criminal who was not punished for his crime. Maybe not punished through the regular avenues of the justice system, but I’d say he was still punished, perhaps in a more severe manner. The film was considered obscene and indecent by many. It was even banned in New York State, the city of Milwaukee and other places.

Interestingly, Robinson, Bennett, and Duryea had all appeared together in another Fritz Lang film the year before in 1944, The Woman in the Window. (The films also shared the same cinematographer, Milton R. Krasner.) Both films also deal with a lonely, middle-aged man and prominently feature paintings. Which is the better film? Which is the better example of film noir? I’ll let you decide that for yourself as well.

The Mill Creek edition that I watched contains several drop-outs, but that’s about what I expected. As I mentioned before, since it is a public domain film, you can find Scarlet Street just about anywhere, but probably the best edition is the Kino Lorber Blu-ray from 2012, which includes a 1080p transfer from the best 35mm print available, yet this is a transfer and not a restoration. This edition also includes an audio commentary by film historian David Kalat.