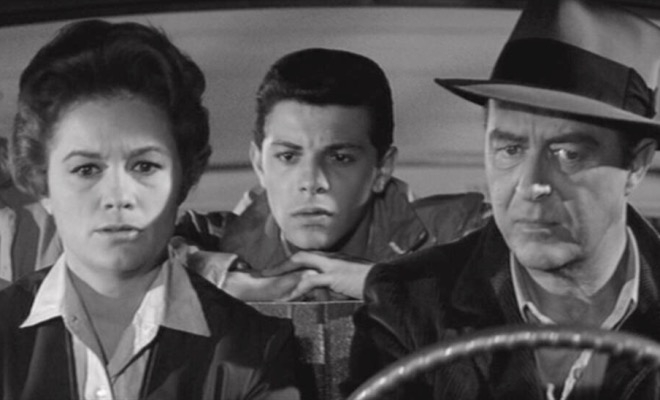 Harry Baldwin (Milland, above right, who also directed), his wife Ann (Hagen, left) and their two kids (Avalon, center; Mitchel) take their car and camper on a trip outside of Los Angeles when they see several flashes of light and a huge mushroom cloud in the distance, where they’ve just come from. Harry puts things together quickly and launches into survivor mode, stockpiling food, gasoline, firearms and ammo. As civilization and common human decency begin to crumble, we become horrified at how quickly Harry begins changing the rules of civilized behavior with thievery and violence. 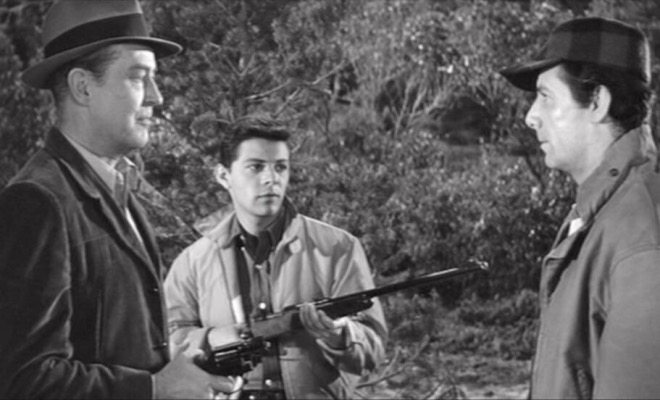 Worse yet, his son Rick seems to be thrilled to be part of the adventure. (I always thought Frankie Avalon was something of a hoodlum at heart…) Each interaction with others becomes a potential powderkeg moment, usually running headlong into exploitation mode. But again, this is an American International picture, so what do you expect?

On the positive side, Panic in Year Zero presents us with very little sermonizing or “How we got to this point” speeches, although some amount of that was more-or-less obligatory in 1962. (Interestingly, the film was released a few months before the Cuban Missile Crisis.) Besides some of the thug roles in the film, the acting is quite good. The low-budget effects actually work to the film’s benefit, since we’re focused less on the physical carnage and more on how the survivors behave as people.

Some of the scenes come across (especially in 2016) as pretty cheesy, but the biggest factor that might turn viewers off is the Les Barker score. Barker (who composed many scores for American International) frequently uses an often blatant, high-energy jazz score in this film, which rarely works and makes for awkward and/or laughable moments. Despite the film’s problems – and the fact that it’s dated – Panic in Year Zero is still an effective end-of-the-world thriller that you should check out. The film is available on Blu-ray and DVD from Kino Lorber and features an audio commentary by film historian Richard Harland Smith, a 9-minute conversation with Joe Dante, and theatrical trailers.