Although it wasn’t the first film of the day, the first film I saw at Noir City DC 2016 was Gilda (1946), the second time I’d seen the film, but the first time on the big screen. (You can read my previous thoughts here.) The film was introduced by noir author and historian Foster Hirsch, who wrote one of my favorite books on film noir, The Dark Side of the Screen.

Hirsch mentioned that the film remains memorable for modern audiences. First, it was an enormous hit for many reasons, not the least of which is the return of thousands of GIs from WWII who wanted to see Rita Hayworth in the film that made her a superstar. Hirsch called her first on-screen appearance in the film “one of the greatest star entrances in film history.” 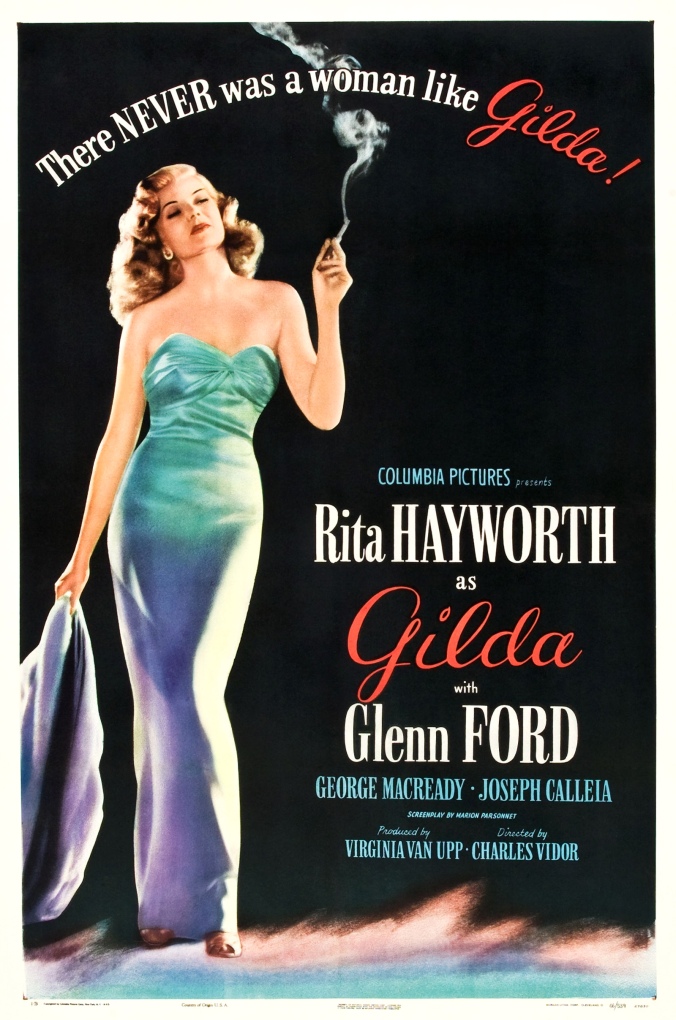 It also made a star of Glenn Ford, who reportedly (at least according to Ford’s son Peter) was a difficult man to know. Hirsch mentioned that one of the greatest strengths of Ford was  his ability to not let you see him acting.

“This is a very strange Freudian film,” said Hirsch, with “a homoerotic charge to it.” Maybe no one at the Production Code offices knew that the entire story is a bisexual love triangle, or maybe they just let it go (which seems unlikely). Hirsch noted that the production schedule was chaotic and the ending largely improvised, which is clearly the film’s biggest weakness. Hayworth’s two songs (dubbed with the voice of Anita Ellis) were added after the film was completed. 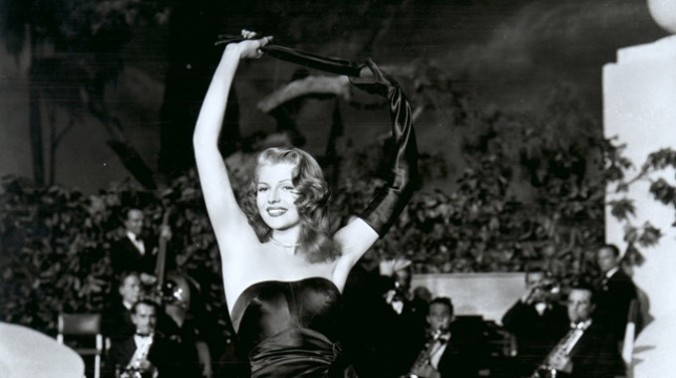 Hirsch also thought the filmmakers could’ve made more of the “Nazis in South America” angle, complaining that “they (the filmmakers) don’t even try to put you in South America,” but rather shot the film on sound stages. He even admitted near the end of his introduction that Gilda is “not one of my favorites.”

(Obviously this poster was printed for a re-release of Rear Window, since Psycho came out six years later in 1960. I still like the poster and Raymond Burr’s disembodied head. Even more, I love the link to Perry Mason, a character that’s the total opposite of who Burr plays in Rear Window.)

Next, Hirsch introduced Rear Window (1954), a film he is clearly more enthusiastic about discussing. Many movies earn the label “film noir” by having at least one or two noir elements or “noir stains,” as Hirsch calls them, but Rear Window – even though it’s in color – is 100% film noir. “Hitchcock is as noir as you can get. For me, noir is about ordinary, law-abiding citizens… who enter into a crime scene.” They’re not criminals, but their lives have been overtaken by crime.

And when we watch film noir, we’re complicit, too. James Stewart actually wants there to be a murder. So do we. There’s a definite transference of guilt; we’re complicit in the desire of crime. In Rear Window, Hitchcock is actually reconstructing the entire movie-watching experience. Stewart is looking at every frame of his neighbor’s activities and his experience is ours.

Stewart gives such an incredible performance, but even more so when you consider that he was actually not looking into actual apartments during the filming, but probably at a blank screen or perhaps a model or a backdrop. His close-ups and reaction shots are astonishing. Hirsch also credits the performance of Grace Kelly for making the film unforgettable, “an American masterpiece.”

Hirsch stated that when you revisit great films, you see something new each time, something you’d never seen before. That certainly happened to me, especially in hearing something new in a phone conversation between Jeffries and Doyle. But visually, also; details in some of the apartments, Hitchcock’s use of color, etc. And I honestly don’t think it ever registered with me that the alarm clock started ringing after it smashed into the courtyard. 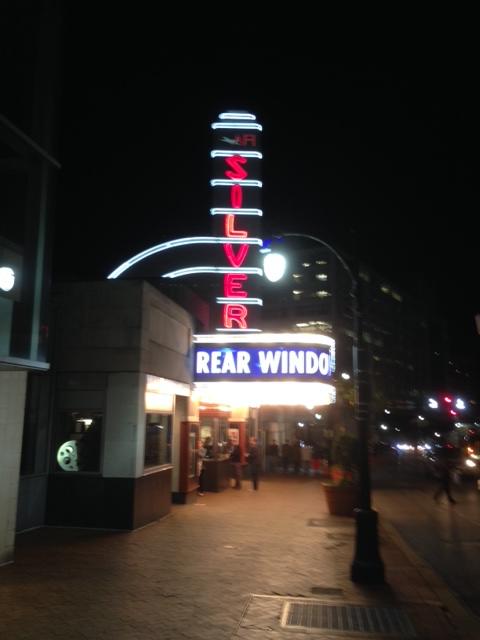 When I go to festivals, I always wonder how many people are seeing these films for the first time. Hirsch asked for a show of hands. There were at least 120 people there to view Rear Window and it seemed at least 50 were seeing it for the first time. And you can just tell, even after a few minutes, whether an audience is connecting with the film or not. This one was, laughing in all the right places (usually at Thelma Ritter), sighing in all the right places, and having their breaths taken away by Grace Kelly. I even heard gasps as Thorwald approaches his apartment with Lisa inside looking for the jewelry. I think I was probably gasping too.

I’ve said it before: there’s just something about seeing a film in a theater filled with people. It’s a community, certainly, but it’s more than that. It’s a sharing, a participating in something that we have mostly lost when we stream from Netflix (or any other service) or sit on the couch to watch a DVD or Blu-ray. Even when you invite people over, it’s just not the same. These shared experiences are meaningful and maybe even essential. When you get the opportunity, I hope you’ll join in the community.