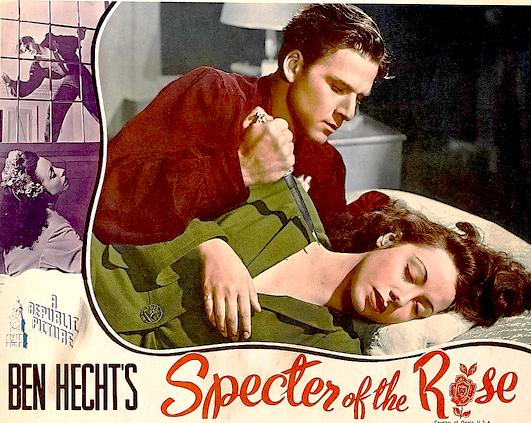 Sunday was my final day at Noir City DC 2016 and the final day that Eddie Muller would be on hand to introduce films. The viewing day began with a film I’d never seen, Specter of the Rose (1946), written, produced and directed by Ben Hecht. Hecht’s work is now legendary, but at the time he was a newspaper man writing for the Chicago Tribune. Screenwriter/director/producer Joseph L. Mankiewicz urged Hecht to write screenplays for Hollywood, telling him, “There’s millions to be grabbed out here and your only competition are idiots!”

Hecht did write for Hollywood (and his list of credits is astonishing), although he did so grudgingly. He had an admiration for artists, but the cynicism of a journalist. As a challenge to himself, he was determined to make movies and did, directing seven films including Specter of the Rose. The film was a Republic picture and the studio gave Hecht a $160K budget and complete control. It must’ve been quite an experience. The film was apparently shot in only seven days and Muller calls it “one of the weirdest films you’ll ever see.”

The less I tell you about the film, the better, but I must give you something, so here goes: Judith Anderson plays an aging ballet teacher whose student Haidi (Viola Essen) is becoming involved with a talented but strange dancer named Andre Sanine (Ivan Kirov), who may or may not have murdered his first wife. That’s really all you need to know, except that you’ll see some great performances by everyone, including Michael Chekhov as a dandy impresario and Lionel Stander as a poet (of all things!) in love with Haidi.

The film is loaded with shifts in tone, totally unpredictable dialogue, and all manner of strangeness. Muller screened the film at Noir City San Francisco earlier this year and had people tell him afterward that they loved the film, yet others warned, “NEVER show this film again!” I really enjoyed it, following Muller’s final advice before the film rolled: “Relax, open up to it and let this movie happen.”