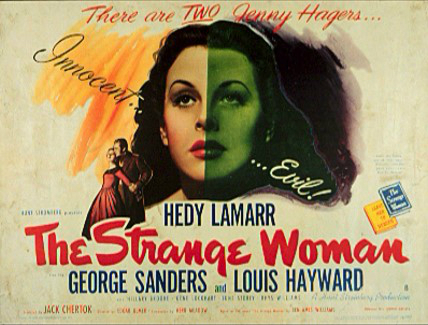 I’m normally not a huge fan of historic period film noir, films such as House by the River (1950), which I watched for last year’s Noirvember. I appreciate the noir element, but it’s really hard for me to think of those films as noir. 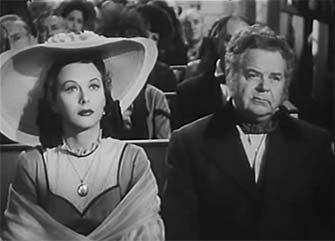 The Strange Woman takes place in Bangor, Maine in the first half of the 19th century. A young headstrong girl named Jenny Hager (Hedy Lamarr, left) grows up to be a ravishing beauty, but she’s also cruel and manipulating. She longs for the good life and marries Bangor’s wealthiest resident, Isaiah Poster (Gene Lockhart, right), a man old enough to be her father. At this time, Bangor is largely a logging town with no police force whatsoever. While Poster is focused on raising up a police force and protecting his timber business, Jenny turns to Isaiah’s son Ephraim (Louis Hayward, below, left photo) for help. What does she need Ephraim to do? Kill his father. Ah, but that would be too simple and too reachable a goal. Jenny has her mind set on bigger things, perhaps involving the manager of Poster’s timber business, John Evered (George Sanders, below right photo). 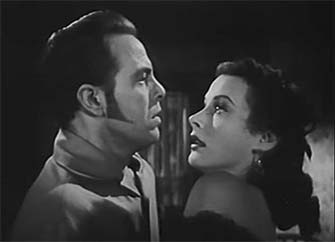 There’s a lot going on when you’re trying to work your way through three men in 100 minutes, but Hedy Lamarr is up to the task. In an early scene, we see Jenny being whipped by her father (Dennis Hoey). As the whip strikes her repeatedly, we don’t see pain on her face, but rather acceptance, then resolve, followed by a wicked smile. Not only does she probably like it, but she knows that in just a few moments, she’s going to be the one in control.

Jenny becomes a force to be reckoned with and not only by the men in her life. When the local preacher asks for money for a church expansion project and none of the men in the congregation are willing to help, Jenny stands up and announces, “If the men of Bangor won’t pledge to the church, the women will” and pledges $1,000 of Isaiah’s money. Other women follow suit.

Hedy Lamarr owns this movie. She’s amazing in every scene, stealing the film from George Sanders, who normally stole every scene in every film he appeared in, but he can’t even come close to Lamarr. Sure, some of that has to do with the writing, but Lamarr was just on fire here. This is not simply a case of an actress going overboard; Jenny is a complex character and Lamarr makes us believe in each facet of Jenny’s many conflicts and situations.

The Strange Woman also marks a rare venture for Edgar G. Ulmer into a production with a real budget. Made just one year after low-budget masterful Detour, The Strange Woman must’ve seemed like a dream come true for Ulmer. The result is a fine picture that works well as a historical costume melodrama and a film noir with a definite femme fatale.