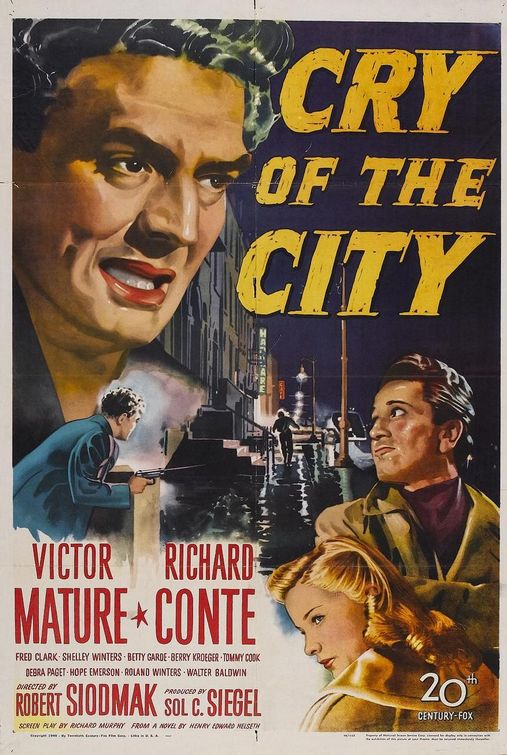 Cry of the City opens with Alfred Newman’s soaring, dramatic score, seemingly promising drama or even melodrama, until the opening credits end with an ominous chord that hits you square between the eyes. There’s no mistaking the music’s message: you’re in film noir territory.

The first time we Martin Rome (Richard Conte, left) it looks like it might also be the last time. Rome is in a hospital prison bed, wounded from a post-robbery shootout with the cops, one of which he killed. Rome’s got the chair waiting for him, but a crooked lawyer named Niles (Berry Kroeger) wants him to confess to a murder he didn’t commit in order to save the innocent man who is accused of the crime. Rome tells Niles what he thinks of his idea in no uncertain terms, but his troubles keep mounting: Police lieutenants Vittorio Candella (Victor Mature, right) and Jim Collins (Fred Clark) have a few questions about the robbery that put Rome in the hospital and another crime he’s suspected of pulling off. Even though Rome and Candella grew up in the same neighborhood and have known each other all their lives, it’s not exactly Old Home Week when Candella comes to visit. Of course we know that Rome is going to recover and he does, but he also gets some help from a few people and that part I’m going to let you discover for yourself.

From the movie’s poster (and even more from the Blu-ray cover) and Mature’s receiving top billing, you might think this is Candella’s movie. It’s not. As Rome, Conte certainly gets more screen time and a much more interesting role, one of his best. (More on Conte later.) One of the many things that sets Cry of the City apart is its examination of both Rome and Candella and how their roles refused to be limited to stereotypes.

We know early on that Rome and Candella have known each other all their lives, but Siodmak understands that it’s not necessary to have this explained to us every five minutes. We know it by the way the characters treat each other and the people around them. Sure, Candella is the tough cop, but he has compassion on Rome’s little brother Tony (Tommy Cook, left), not wanting him to follow in his brother’s footsteps. Candella also knows what Rome’s life of crime has done to his mother (Mimi Aguglia) and it pains him. Conversely, Rome isn’t just a hardened criminal; he has many layers and facets and some real surprises for audiences who’ve come to expect one-dimensional criminals. 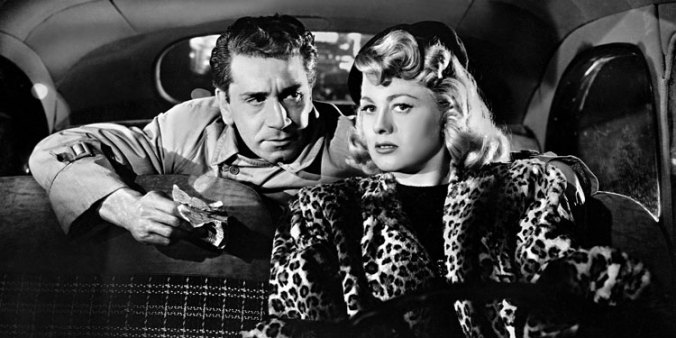 Both actors deliver fine performances. Mature has never been remembered as a great actor (My mom always referred to him as “Victor Manure”), but his portrayal of Candella contains unusual depth and feeling. Richard Conte has to be one of the most underrated actors in film noir or really of any type of film. I still think his finest performance is in Thieves’ Highway (1949), but his work here is also excellent. Many will know Conte only from his appearance in The Godfather (1972) or perhaps his role in The Twilight Zone episode “Perchance to Dream.” If you want to see more Richard Conte after seeing Cry of the City, you’ve got several good ones to choose from. 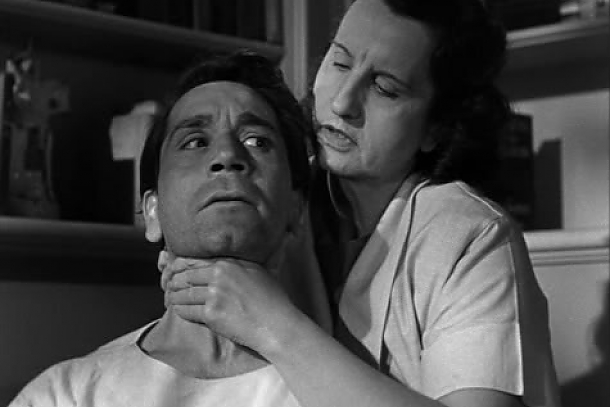 The film also features some nice scenes with a young Shelley Winters (two pictures above) as one of Rome’s girlfriends. I should also mention that the real highlight of the film is the appearance of Hope Emerson (directly above) as a masseuse who was an accomplice in one of the off-screen crimes referred to in the film. She’s absolutely wonderful here and as soon as she appears, you can’t take your eyes off her. You’re not sure if this 6’ 2” 230-pound woman will be menacing or simply unflappable. I’ll tell you nothing further except that her scenes with Conte are unforgettable. 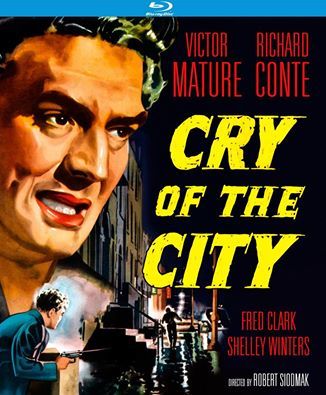 The new Kino Lorber Blu-ray release of Cry of the City also includes an audio commentary from Eddie Muller, which is reason enough to pick up the disc on a blind buy. Listening to Muller is like enrolling in the PhD program at Film Noir University. I only listened to bits and pieces of the commentary last night, but can’t wait to soak up the entire thing.

Whether you’re a hardened film noir fan or new to these films, Cry of the City is a must-see. I hope you’ll see it and let me know what you think.