In every Nicholas Ray film I’ve seen, there’s always an underlying darkness that emerges from within what appears to be a conventional (or more likely an unconventional) drama and that’s certainly true of On Dangerous Ground. I just started reading Nicholas Ray: An American Journey by Bernard Eisenschitz, which is a fascinating look at the director’s life and work. I haven’t gotten that far into the book, but I feel certain that loneliness and isolation play a big part in many of his films. They certainly do in this one.

Robert Ryan (right) plays Jim Wilson, a New York City cop who’s just about to ruin his career if not his life. He’s single, lives alone, and has nothing to show for his life other than a few dusty athletic trophies and a raging brutality that he takes out on criminals. After assaulting a hood who may have information leading to a bigger crime, Wilson is assigned by police captain (Ed Begley) to a murder case in upstate New York.

Once there, Wilson finds the father (Ward Bond, right) of a murdered girl, a man so filled with vengeful rage he can’t focus on anything else. In tracking down leads, Wilson and the father come across a blind woman named Mary (Ida Lupino, below) who may have some answers to the case of the murdered girl. 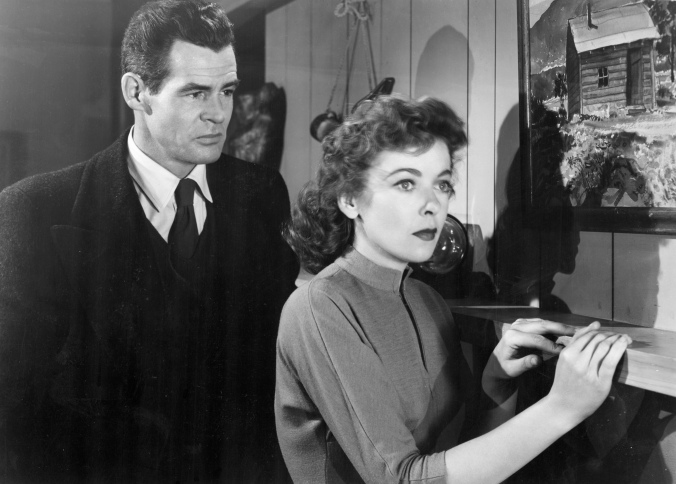 There’s very little that’s typical in a Nicholas Ray film and On Dangerous Ground becomes an atypical film noir after its first half hour as we leave the city and enter the snow-covered countryside. Wilson does need a change of scene, but what he really gets in this rural farm community is an opportunity to look inside himself, especially as he tries to figure out Mary’s worldview and what she really knows about the murder.

Ryan has few lines during the second half of the film and it’s clear that he’s finding his way with far more difficulty than the blind Mary navigates her surroundings. On Dangerous Ground is a very self-reflective movie, one that RKO probably didn’t exactly know what to do with, shelving it for nearly two years. When it finally was released, it lost money. Thankfully, Warner Archive has recently released the film on Blu-ray and it looks spectacular. This is the second time I’ve seen the film and I certainly hope it won’t be the last. If you’re looking for something a little different for Noirvember, I hope you’ll consider On Dangerous Ground.

(I should also mention that the Bernard Herrmann score is nothing short of spectacular.)