(For more about the Blind Spot series, please check out The Matinee)

David Lean’s Brief Encounter is undeniably a great film, one that continues to resonate with audiences for many reasons: it depicts a forbidden romance, is superbly crafted, meticulously photographed, and refuses to descend to the level of sappy vapid romances that have plagued movies since their inception. Although the story is set in the prewar British suburbs of 1938, the film was released in November 1945, several months after the end of World War II. While Brief Encounter is not a film noir, it contains an undercurrent of dissatisfaction (in this case, with a marriage) and unease, elements that are common to both noir and the postwar era. The film also prompts us to examine our own lives, in effect asking – regardless of the differing mores of 1945 versus 2017 – “What would I do in a similar situation?” Brief Encounter hits us where we live. 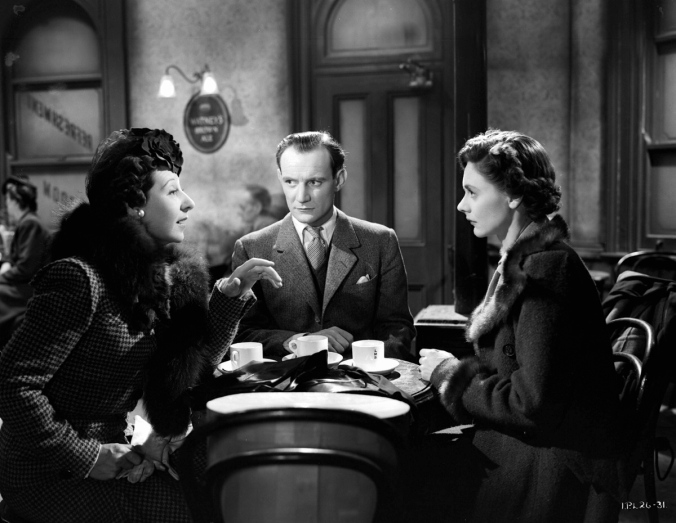 As the film opens, we see a couple, Laura (Celia Johnson, right) and Alec (Trevor Howard, center) sitting at a table in a small tea room at a railway station. Their faces are plastered with somber, yet anxious looks as if they’re waiting for the earth to suddenly swallow them whole. Dolly Messiter (Everley Gregg, left), an acquaintance of Laura’s, stops at their table and joins them. It takes only seconds for the audience to realize that Dolly is a talkative bore and her visit is the last thing Laura and Alec want or need. As Alec initiates a hasty (and, we gather, unplanned) retreat, he places his hand on Laura’s shoulder for just a moment. Although Dolly thinks she’s just interrupted a casual meeting of friends, this shot tells us the relationship means much more.

That shot (and its intent) was recreated 70 years later in an early scene in Carol (2015), a film I saw just weeks ago and now want to see again to see if other comparisons to Brief Encounter present themselves. I suspect they do since Carol is another film about forbidden love set in the 1950s. Yet I digress.

Unfortunately for Laura, she has to ride the same train home as Dolly, who continues her non-stop chatter. When we hear Laura’s thoughts via voice-over, we’re somewhat shocked to hear her thinking “I wish I could trust you…” followed by a more understandable “I wish she’d stop talking…” The scene implies that since Alec’s departure, Laura is alone and needs someone to talk to, not just to fill the silence, but to unburden herself to someone who will either understand, know what to do, or both. You don’t have to be a seasoned filmgoer to know that Laura and Alec are in love or to know that they’re married – just not to each other.

Laura arrives at home to find her husband Fred (Cyril Raymond, above) engrossed in a crossword puzzle. Consider just one indication of how masterful the script is for Brief Encounter: in just a few seconds of dialogue, we understand that Laura and Fred have very different ideas on parenting, leisure time, and life in general. They are creatures of routine: Fred with his crossword puzzles, Laura with her excursions to the small town of Milford every Thursday for shopping and a movie.  Here is a couple who once may have been happy but now are going through the motions. Fred is quite comfortable with this; Laura is not, especially since Alec came into her life.

In the comfort (or perhaps discomfort) of her own home, Laura resumes her thoughts, recognizing that her marriage to Fred was probably enough for her “until a few weeks ago” when she met Alec. What follows for most of the rest of the film’s running time is a flashback (again, similar to what we might see in a film noir) about how this whole situation began. The flashback serves as more than just a plot device for us to see how things developed between Laura and Alec. It’s also a silent confession.

“It all seemed so natural and so innocent…” 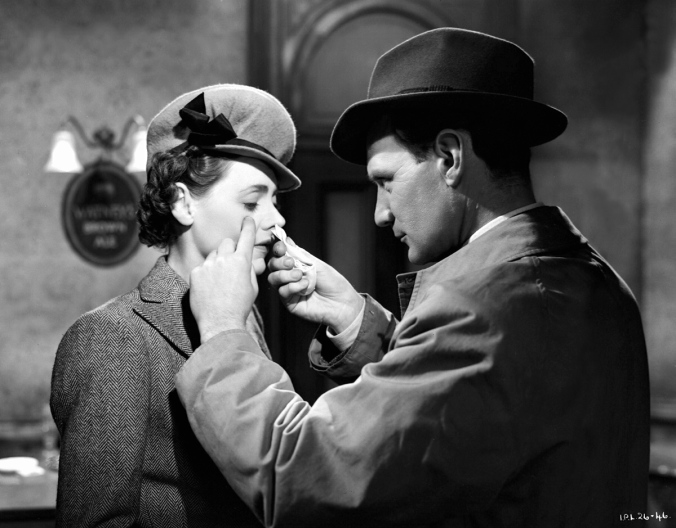 It certainly did. Laura and Alec’s first encounter was indeed brief: Alec, a doctor, was on hand at the tea room to help Laura remove a piece of grit from her eye. (This also ironically foreshadows the news later in the film that Alec is working on preventive medicine to help coal miners remove particles of dust from their eyes.) He also is in town every Thursday to do work at the local hospital. Things progress quickly, but not too quickly.

Even early in his career, David Lean (who started as a film editor, which probably helped) knows how pacing can make or break a film. He knows when we need a bit of comic relief, so he gives us a glimpse at another relationship in the making: a ticket collector (Stanley Holloway, left) can’t stay away from the manager of the tea room (Joyce Carey, right). In a series of short scenes, we see that the ticket collector is perhaps just flirting, but maybe he has more in mind. We certainly don’t know as much about him and the tea room manager as we do Laura and Alec, but the lightness of their encounters gives us a bit of levity and shows the counterpoint of the main characters’ relationship.

We know simply from the film’s title that Laura and Alec’s relationship is doomed to failure, but that doesn’t stop us from somehow wanting it to work out. Laura and Alec aren’t necessarily bad people; they’re just both in relationships with spouses that are no longer fulfilling. Who’s to say that if it were the other way around, if Laura and Alec would’ve met and gotten married first, that the same thing wouldn’t have happened anyway? A creeping sense of dissatisfaction can creep into the best of relationships. 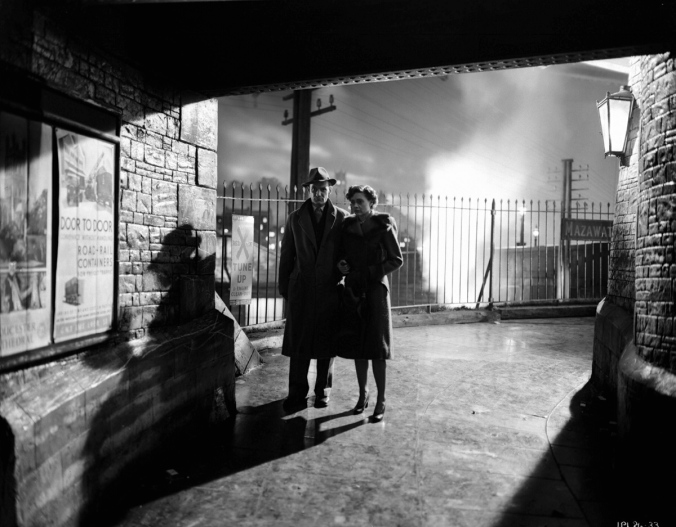 Some films you see and know that they’re truly great, which doesn’t occur as much as we’d probably like. Even more rare are the films that are great and affect us on a deeply personal level. Brief Encounter reminded me of a relationship I had many years ago when I was much younger. While neither of us were married at the time, a significant age difference was involved which would’ve created some real problems. Brief Encounter reminded me of those feelings of exhilaration, joy and adventure, but it also reminded me of the pain and inevitability of relationships (I won’t call them “doomed”) that we don’t like to admit simply aren’t going to work.

Does the ending of Brief Encounter give us hope? Does – can – it give Laura hope? What about Alec? What happens next? It doesn’t matter. That brief encounter will stick with them for the rest of their lives, and perhaps ours as well. 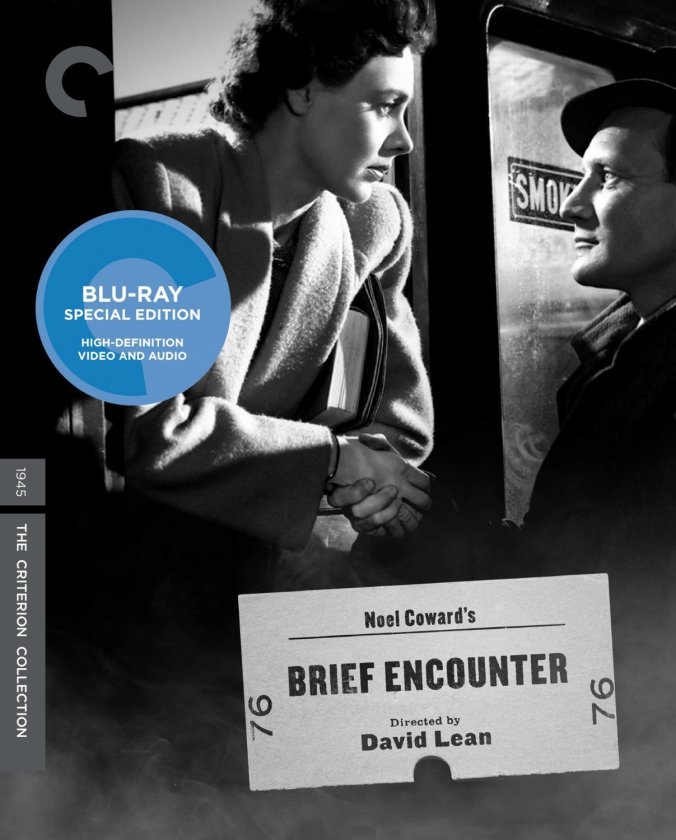 Brief Encounter has been a Criterion release for quite some time on DVD and is now available as an individual release on Blu-ray and as part of the David Lean Directs Noël Coward box set, which also includes In Which We Serve (1942) This Happy Breed (1944) and Blithe Spirit (1945), which are Lean’s first four films as a director. Having seen Brief Encounter, I must see them all. For those who have only seen Lean’s lavish epics, such as The Bridge on the River Kwai (1957), Lawrence of Arabia (1962) and Doctor Zhivago (1965), Brief Encounter shows that Lean didn’t necessarily need a huge landscape, a cast of thousands or an enormous budget. Just two people in love can be enough for a masterpiece.