You could easily overlook this film while searching for something to watch on Netflix. I did. It wasn’t until I heard Leonard Maltin mention Too Late on his podcast Maltin on Movies as an overlooked film he recommends that I decided to see it. Yet Maltin seems to be one of the few critics praising the film. Some have called it awful. (One Rotten Tomatoes critic called it “perhaps the worst thing I have seen in the many years I’ve attended this [Cleveland International Film] festival.” Do I recommend it? Read on.

Too Late is a neo-noir crime thriller consisting of five 20-or-so minute episodes, each filmed (mostly) in a single take. The episodes are placed in non-sequential order. In the first, a young woman named Dorothy (Crystal Reed, right) wanders around the Radio Hill area of Los Angeles. Two guys who look like drug dealers (Rider Strong and Dash Mihok) meet her and are obviously interested. She just wants to borrow a cell phone to make a call. She reaches Mel Sampson (John Hawkes), a man Dorothy hasn’t seen in three years. At this point we don’t know anything about their previous relationship. Sampson says he’ll drop what he’s doing and meet her. A park ranger (Brett Jacobsen, left) enters the scene wondering why Dorothy is wandering around on Radio Hill. I can’t tell you what happens next other than to refer you to the film’s title. 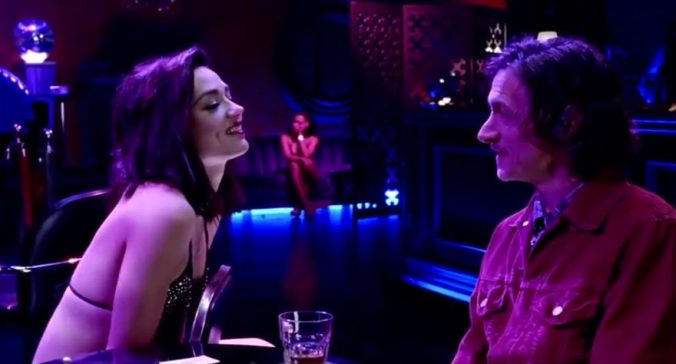 This is not much of a spoiler, but I will tell you that Dorothy is a stripper and Sampson is a private detective and that strippers are essential to the plot (although the film contains less nudity than you might think). It’s probably also not much of a spoiler to tell you that you’ll recognize the “feel” of the movie. It’s heavily influenced by Quentin Tarantino films that use some of the same non-linear storytelling with the same types of dialogue you hear in films like Pulp Fiction. The dialogue is one of the things that strikes you immediately in Too Late and never lets up, dialogue that’s too-clever, too hip, too verbose, and too self-conscious. People don’t talk this way, but we’re in a movie, so it’s okay, right? Not really. I know what you’re thinking. “Hey, you have talk like this in film noir all the time!” Yes you often do, but it’s usually contrasted with characters talking in more traditional ways in order to heighten its impact. Here that contrast never happens and the dialogue either turns into caricature or makes us think we’re in a fantasy world, both of which lessen the intended impact.

The single-take technique works best in the opening episode since this open location allows for the most mobility. In a film like Victoria (over 2+ hour film shot in a single take), the characters are often on the move, going somewhere. Much of Too Late takes place in isolated settings, many of which consist of characters having conversations with each other while sitting far apart. The only way you can film that in a single take is by pan-and-scan, which can get old very quickly. What’s frustrating about these scenes is the fact that they didn’t need to be filmed in a single take. There’s really nothing to be gained by this technique, other than audience frustration.

You might think at this point that I hated the film. I did not. There is much to like and appreciate. I have to admire anyone who could get John Hawkes, Joanna Cassidy and Robert Forster to sign on to a project. Hawkes is amazing as always, part hardboiled detective and part tired and weary man trying to do the right thing in a world that won’t allow it. The women in the film are all in positions of exploitation and their characters (not necessarily their dialogue) are well written. (Dichen Lachman [above] is also quite good as a stripper who also runs a drive-in movie theater.) Some of the dynamics of the film are extraordinary and Hauck is touching on some really interesting territory. You have to keep the title in mind at all times, which delivers several bittersweet rewards.

Glenn Kenny at Roger Ebert.com says the movie “teeters on the brink of out-and-out disaster at several junctures. But as failures go, it’s more interesting than most.” Dennis Harvey at Variety calls the film both problematic and fascinating. I wouldn’t call Too Late a disaster or a failure, but rather proof that Dennis Hauck is a talented director to keep an eye on. I certainly plan to do so.