Early in the film, 17-year-old Lonnie Bannon (Brandon deWilde) leaves a small Texas ranch and heads into town as per the request of his grandfather and ranch owner Homer Bannon (Melvyn Douglas). Lon has been sent on a mission to find his Uncle Hud (Paul Newman), but he’s not anywhere downtown. When Lon comes upon a bar owner sweeping up broken glass from the sidewalk, he asks what happened. “I had Hud in here…” is the bar owner’s answer.

If we’re not sure what type of title character we’re dealing with at this point, we don’t have to wait long. Lon finds Hud at the house of a married woman, let’s say in a situation where Hud clearly doesn’t want to be disturbed. (Later Hud will say “The only question I ever ask any woman is ‘What time is your husband coming home?’”) Lon tells Hud that Homer is urgently looking for him. About the same time, the woman’s husband pulls up in his car. The man knows one of them has just emerged from his house after having bedded his wife, but he doesn’t know which one. Hud points the finger at Lon and laughs all the way, long after they’ve escaped the enraged husband. Ladies and gentlemen, meet Hud. 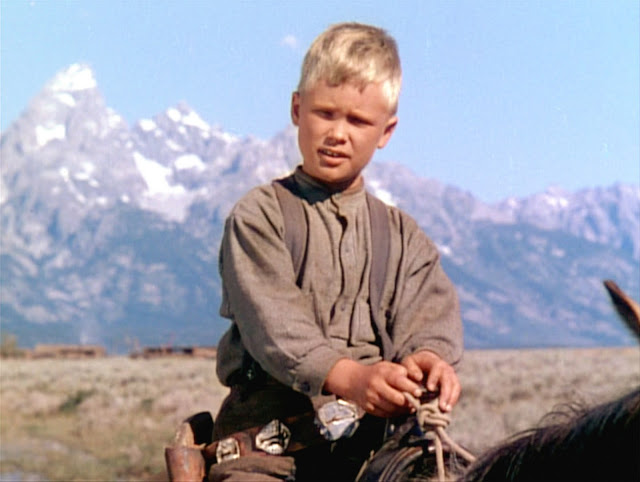 It may take a moment, but you’ll remember Brandon deWilde as Joey Starrett, the young boy who looked up to Alan Ladd’s iconic titular character in Shane (1953). Here, he’s looking up to his selfish heel of an uncle, Hud, whose deceased brother was Lon’s father. 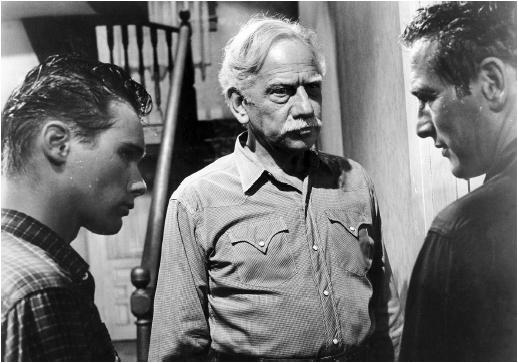 At 34, Hud is exactly twice his nephew’s age and looks down upon his father Homer as much as Lon looks up to Hud. Homer is a man of principle and integrity, concepts Hud feels are relics left over from ancient times. Hud takes what he wants; screw the consequences. When Homer learns that his entire herd of cattle may be infected with foot-and-mouth disease, Hud urges Homer to sell them all before the veterinarian’s report comes back. Between Hud, Homer and Lon, there’s a real love/hate triangle going on.

There’s another love/hate triangle going on as well. Lon has fallen hard for their housekeeper Alma (Patricia Neal in an Oscar-winning performance), while she avoids Hud’s advances, knowing that he’s a heel, but attracted to him nonetheless. Alma’s the type of character who’s been around, seen a lot, and taken a lot of abuse from men. You don’t exactly hear it in her words, but you see it on her face.

I absolutely love Patricia Neal in this role (I could listen to her all day long) and every line she speaks has the power of experience behind it, but I’m convinced her mannerisms and the way she carries herself won her the Best Actress Oscar just as much as how she delivered her lines.

Master cinematographer James Wong Howe’s high contrast black-and-white photography almost makes us think we’re watching a film noir at times. (There’s certainly thematic darkness aplenty.) We don’t have darkened alleys and rain-soaked streets, just the opposite: stark, dusty landscapes and enormously wide spaces that are contrasted with tight interiors, whether we’re in Homer’s ranch house, Alma’s small housekeeper’s cabin or a local diner. Yet the contrasts are just as striking and powerful as they are in film noir.

Newman is always worth watching, even in bad films. This, however, is a great film and Newman delivers one of his finest performances. Yet it may have had an unintended effect. Apparently Newman and Director Martin Ritt wanted to highlight “the corruption of modern capitalism and the pitfalls of admiring an individual blindly, without observing his character.” (Release and reception) Yet many found Hud an admirable character, especially young people. (Remember, this film was released in May 1963, before the Kennedy assassination and at a time not typically associated with anti-heroes, at least not yet.) Hud is technically a Western, but the title character displays few of the virtues normally associated with a Western hero. Did audiences simply see Paul Newman and think, “He’s the good guy”? I don’t think it’s that simple. 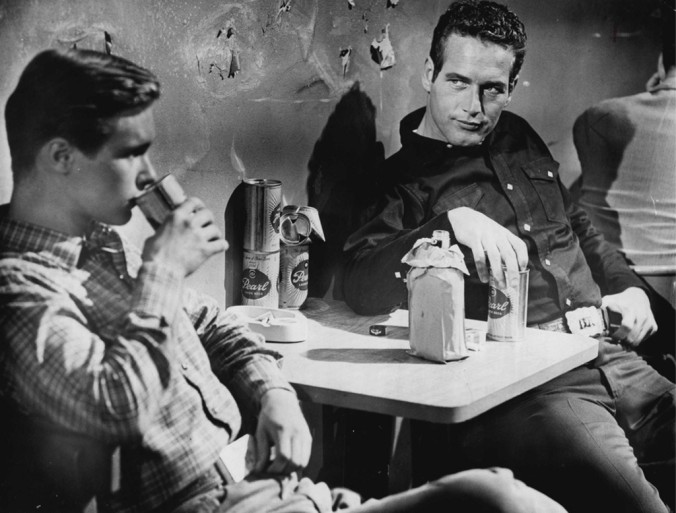 Hud clearly scorns and disdains his father’s values and ideals, which doesn’t seem to shake Homer’s confidence in them one iota. Yet, as stated before, Lon looks up to Hud, even though he knows what he’s like and is learning more with each moment. And there’s some of Hud in Lon. Like Hud, he longs for something different. You can see obvious elements of this in the way he looks at Alma. Lon is a late adolescent/early adult wanting a mature encounter with a woman. But he’s inexperienced and probably won’t treat any woman with disrespect, certainly not like his uncle. Hud, on the other hand, simply takes what he wants until he’s ready for someone new. I would love to see what modern audiences think of Hud (the character and the film). I suspect in 2017 Hud might be considered a hero by many, and that scares me on many levels.

Although he may appear to be quite simple on the surface, Homer is filled with depth. Just watch how he handles bad news when he gets it as well as how he reacts to Hud’s behavior. We know Homer has seen this over and over through the years and it’s clearly visible on his face. The audience comes to believe that maybe Homer (whose name brings to mind the ancient Greek poet) really does belong to another time. He rebukes Lon for listening to current (country) music on his pocket radio, yet sings “My Darling Clementine” at the top of his lungs at the movie theater with Lon. Douglas deservedly won a Best Supporting Actor Oscar for his performance in Hud.

Yet Newman didn’t. He was nominated for a Best Actor Oscar seven times (Cat on a Hot Tin Roof, The Hustler, Hud, Cool Hand Luke, Rachel, Rachel, Absence of Malice, The Verdict) before finally receiving what was for all practical purposes a “We’re sorry we’ve snubbed you for the past 28 years” Oscar for The Color of Money in 1986. Hud wasn’t even nominated for Best Picture. Yet no one who sees Hud ever forgets Newman’s performance.

Hud may be hard to find. There are currently no Blu-ray releases of the film in any country. See if your local library has a DVD copy. Unfortunately the DVD is out of print and goes for high prices online. I hope to show this at our Great Movies series at the library sometime in 2017. If/when I do, I’ll keep you posted. This one is worth seeking out.

Photos: Derek Winnert, Flickdom Dictum, The Ace Black Blog, The Film Experience, , Pyxurz, The Entertainment Junkie, Did You See That One?