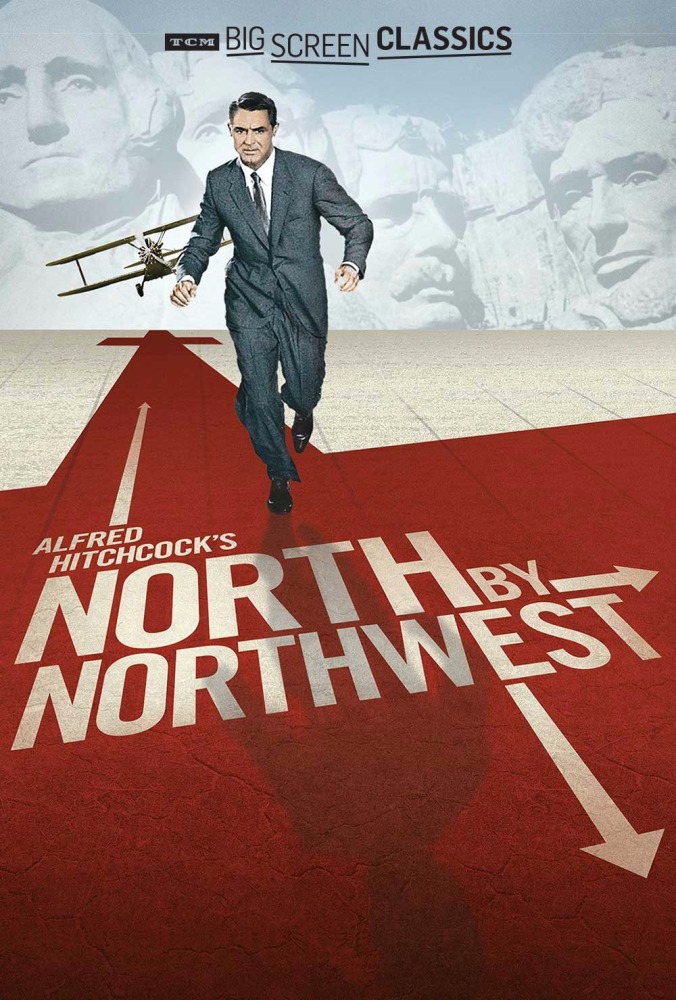 The first time I saw North by Northwest was in my college dorm room on a 12-inch screen. I’ve probably seen it at least ten or twelve times since then, but yesterday I saw it in a theater on a big screen (thanks to TCM and Fathom Events) as it was meant to be seen, and boy, did it make a difference. I noticed things I’d never noticed before and was completely caught off-guard by aspects of the film that become apparent only by seeing it in its original format.

(I am assuming that if you’re reading this, you’ve seen the film, so spoilers will abound. If you haven’t seen it, catch it Wednesday at a theater near you that’s hosting the event.)

First, the green (rather than black) background for the MGM logo always looks weird, but here it looks so big you could swim in it. It’s probably fortunate that Louis B. Mayer wasn’t around in 1959 to see it. (He passed away in 1957.) It may have sent him over the edge, but then again, it melds perfectly with the green title card that follows. The Saul Bass titles just pop on the big screen, something I wasn’t prepared for in the least.

I’d also never given much thought to some of the contrasts Hitchcock uses in the film, but on the big screen, they demand your attention. Hitchcock gives us two shots at the UN building (at least one of which must be a matte shot) that show the contrast between enormous structures and the people in or near them. 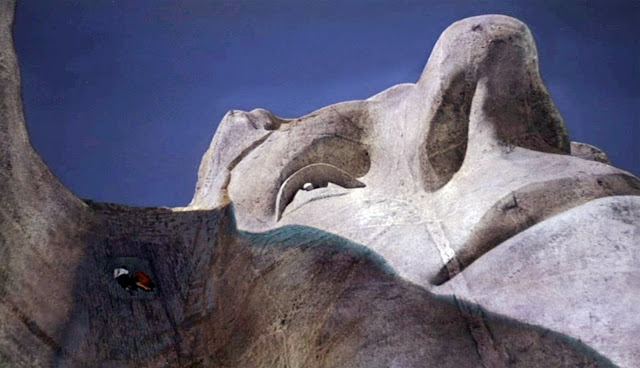 This technique foreshadows the relative smallness of Roger Thornhill (Cary Grant) and Eve Kendall (Eva Marie Saint) as they make their way down Mount Rushmore, clearly showing the enormity of the situation they’re in. The dilemma they find themselves in is obviously bigger than both of them and the big screen shows how they’re literally dwarfed by such imposing structures, reducing them to little more than specks. Masterfully done.

I also never noticed two shots that are very similar, yet vastly different in what they convey visually. One occurs as Roger is waiting at the bus stop at the corn field. He sees a man who has just stepped out of a car, standing on the opposite side of the road. Roger’s not sure if the man is in fact George Kaplan, but the only way to find out is to walk over and ask him. As the shot makes clear, there’s nothing to stop him from approaching the man, other than anxiety and fear. Yet the gulf between them seems vast. Hitchcock leaves his camera on them for what seems like forever, proving that you don’t always need a lot in the frame to produce major tension. 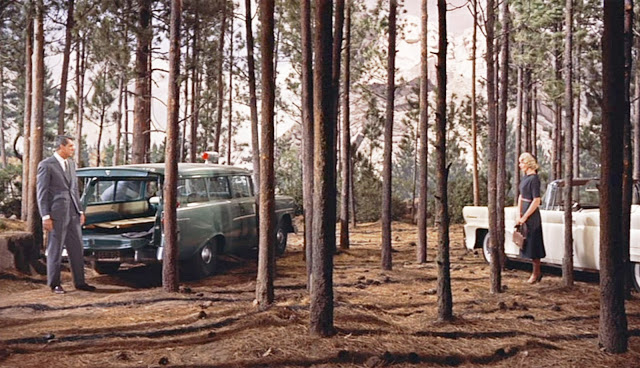 Later, after the fake shooting of Roger by Eve at the Mount Rushmore cafeteria, they meet in a nearby wooded area. Although the distance is less, the shot is almost the same as the highway shot. This time, however, there are trees separating Roger and Eve, signifying obstacles between them, keeping them from reuniting fully and creating some type of lasting relationship. We even see two separate cars pointed in the same direction as if they are going to converge. (You might even say that one is pointed north, the other northwest, but that may be stretching things a bit.) I’d never noticed any of that before.

Also notice how Eve’s blouse is white when she and Roger are in her room, “getting to know each other,” if you will. White normally suggests purity and honesty, and although the two are clearly getting physical, she does insist that he sleep on the floor. There’s a level of trust: Roger trusts Eve at this point. (He really has little choice.) You might even say that she’s wearing black and white, night and day, her loyalties clear with no gray areas. At least that’s how she appears to Roger (and at this point, to the audience as well). And of course Roger is wearing the same suit in both scenes. In more ways than one, he hasn’t changed. 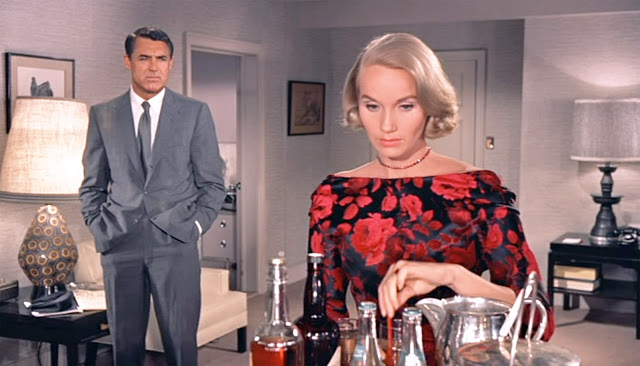 Later on, after Eve’s deception (if we want to call it that), she’s dressed in what I’ve always considered a stunning dress, a black background with mostly red flowers. This outfit suggests an entirely different woman, one who’s hiding something dark inside, the flowers perhaps indicating the potential for death and/or blood being shed. This is also a more elegant Eve, practically a mysterious stranger when compared to the helpful Eve on the train.

Yet no matter what outfit she’s wearing, the big screen brings out many aspects of Eva Marie Saint: the silvery blonde hair and how the light catches it to convey so many different colors and moods, the slightly upturned nose, and lips that appear ordinary but are in fact perfect. Saint was (and still is, even at age 92) a stunningly beautiful woman and seeing her on the big screen makes you appreciate all over again just how striking she looks.

One other thing that I probably have wrong, but never noticed it until today: I would swear Madge Kennedy (playing Mrs. Finlay at the conference table scene with the professor [Leo G. Carroll] and others) is being dubbed with Eva Marie Saint’s voice. If it’s not her voice, the two women certainly sound an awful lot alike.

It’s also a lot of fun seeing my favorite scenes from the film. Everyone has their favorites and mine might be far different from everyone else’s (I have a weird sense of humor), but I absolutely love the scene where Roger escapes his hospital room and climbs through the window of the next room, awakening a woman (Patricia Cutts) who yells, “Stop!” then turns on the lights, puts on her glasses and sees how good-looking Roger is, sighing “…stop…” 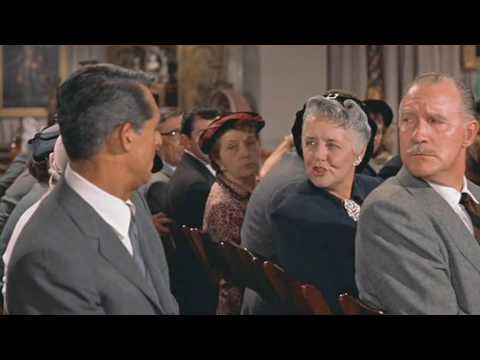 Another occurs at the auction, one of my favorite extended scenes in all of Hitchcock’s output. Roger makes all these ridiculous statements, trying to get tossed out of the auction, commenting on one piece, “How do we know it’s not a fake? It looks like a fake.” I think it’s the look on the woman’s face that gets me as much as what she says: “Well, one thing we know. You’re no fake. You’re a genuine idiot,” to which Roger responds, “Thank you.” At least he’s polite.

My last favorite moment is a combination of a great line, a great actor delivering it, and great camera movement. Once Eve has been found out, Leonard (Martin Landau) asks Vandamm (James Mason), “You’re not taking her on the plane with you?” In a line only James Mason could deliver with such elegance and mayhem, Vandamm responds, “Of course I am. Like our friends, I too believe in neatness, Leonard. This matter is best disposed of from a great height, over water.” The camera tilts and lifts up so that we see Vandamm and Leonard themselves from a great height. A small moment, but I never tire of seeing it. 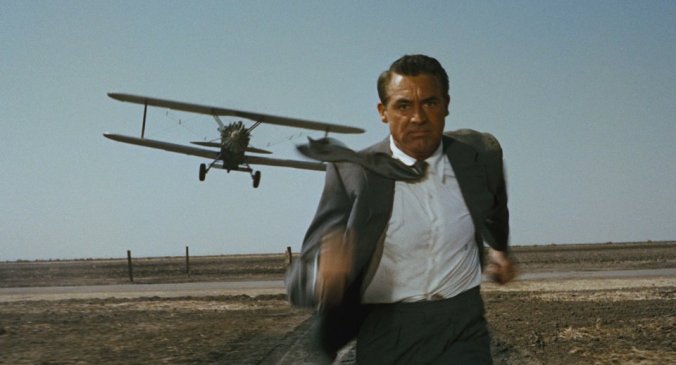 I could go on and on about how much I love this movie and the wonderful experience of seeing it on the big screen. TCM and Fathom Events are showing the film again on Wednesday, April 5. If it’s in your area, I hope you’ll see it.

The Classic Movie Hub has the schedule for the entire series which runs all year. There’s something for everyone here, but I probably won’t see another in the series until Bonnie and Clyde (1967) shows in August. Again, I urge you to support this project and see some great movies. You won’t regret it.