It’s always a roll of the dice, revisiting a film you saw once when you were much, much younger. Do you resist seeing the movie again, fearing that you might tarnish or even destroy those positive memories of a film you cherished in those days when you had few responsibilities, practically no fears or worries, and were willing to try (or at least watch) just about anything? Or do you let those memories lie undisturbed, hidden under an impenetrable protective layer? 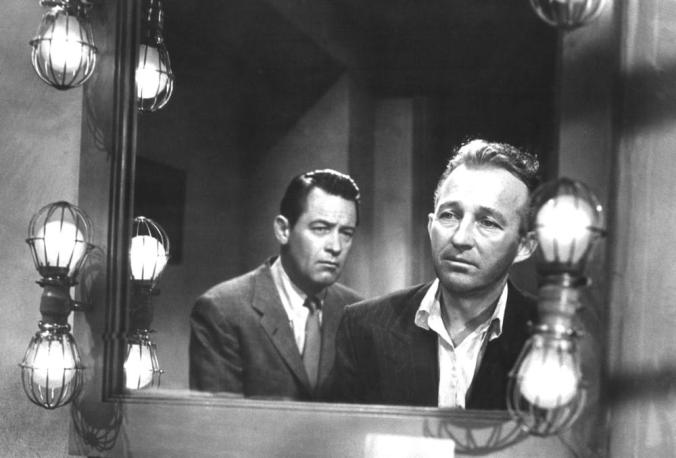 The Country Girl film opens with Bernie Dodd (William Holden, left) as the stage director of a new musical production, a production that’s going to tank before it starts unless he can find a new leading man to replace the previous lead who was fired just one week into rehearsals. Bernie must find a man who can sing, act, and function as the backbone of the production. Remembering that one of his idols is still in the New York area, Bernie calls veteran performer Frank Elgin (Bing Crosby, right) to audition. Bernie’s producer Phil Cook (Anthony Ross) is totally opposed to even letting Elgin audition. Bernie and Cook both know that Elgin ruined his once stellar career by turning to the bottle, but Bernie is convinced that Elgin is sober and can carry the show. 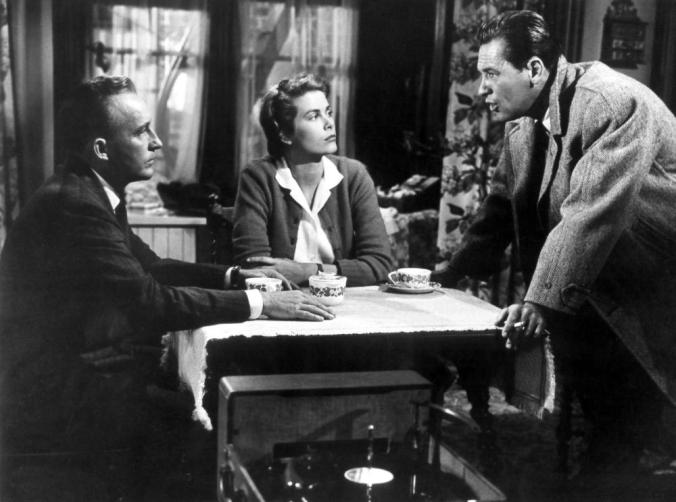 But Cook isn’t the only person who needs convincing. When Elgin unexpectedly runs out after the audition, Bernie tracks him down to Elgin’s apartment where he first finds Elgin’s wife Georgie (Grace Kelly), a woman who’s clearly had a hard life living and suffering with an alcoholic husband who was once so promising. Georgie transfers the scorn for her husband over to Bernie, delivering biting sarcasms to make sure he understands what he’s getting himself into if he hires Elgin for the part.

Of course we know that Elgin does get the part, but the question is will he be able to handle it? Can he stay sober? Is Georgie going to support and encourage him or look for cracks in the foundation of the confidence Bernie has placed in him?

If you’re a veteran watcher of classic films encountering The Country Girl for the first time, I’ll tell you right now: you’ve never seen either Bing Crosby or Grace Kelly like this before. You could legitimately be excused for thinking that they didn’t have these performances in them, but after the film is over, I guarantee you’ll never look at them the same way again. 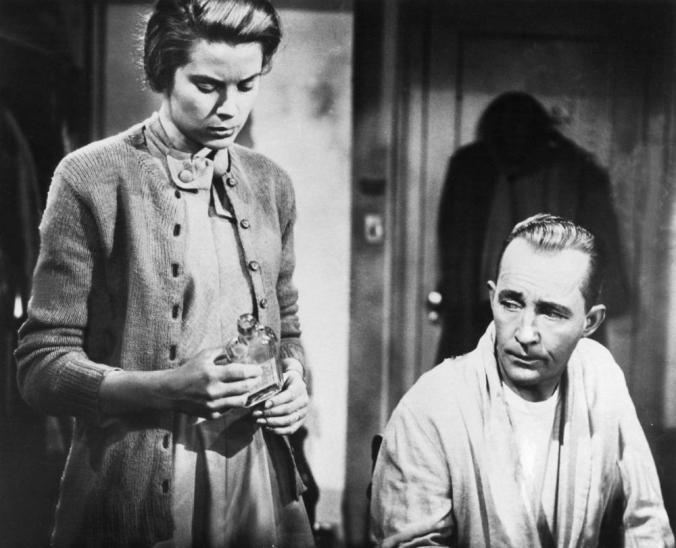 When I first saw The Country Girl in my early 20s I was stunned at how unglamorous Grace Kelly looked and at the hard-hitting lines she delivered. I had previously seen some of her films, but this seemed like the Bizarro World Grace Kelly. Gone was any semblance of glamor, elegance or style. Georgie’s cheap, unfashionable clothes hang from her frame like relics from a bargain basement store you might find in a depression-era thrift shop. You’d pass her on the street and never give her a second glance (if you even gave her a first glance). Yet when she spews her venom on you, there’s no escaping it. No pearls and velvet here, just faded rags and biting aggression.

And Crosby? The crooner is still in there somewhere, but his confidence has been not so much shaken but uprooted and carried away in a funnel cloud, dropped deep within Dante’s Fifth Circle of Hell. Watch how Crosby reacts when confronted with the lies he tells Bernie about how well he’s doing staying sober, that he didn’t realize the cough syrup he’s been drinking contains 22% alcohol. This is not the same guy who made all those carefree road pictures with Bob Hope: this is a guy at the end of a fraying rope and Crosby absolutely nails it.

Now over 30 years later, I’m able to detect some of the film’s flaws (particularly during the last 20 minutes), but I still love it. The film remains effective and powerful, dealing with alcoholism in a way that pulls no punches even today. The performances are amazing and the story compelling, yet no one talks about the film today.

Grace Kelly famously won the Best Actress Oscar for her performance in the film, stunning everyone who thought Judy Garland had it wrapped up for A Star is Born. Despite a very strong year for the Best Actress category (Jane Wyman for Magnificent Obsession, Audrey Hepburn for Sabrina, Dorothy Dandridge – the first African American ever nominated for a Best Actress Oscar – for Carmen Jones, Garland, and Kelly), Garland was clearly the favorite. The story is legendary: Garland was in the hospital after just giving birth to her son Joseph Luft. Everyone was so sure Garland would win, a television crew set up in her hospital room the night of the Oscars to film her reaction to the win. As soon as Kelly was announced as the winner, the camera crew in Garland’s room, quickly dismantled their equipment and departed in silence.

The County Girl also won the Best Writing, Screenplay Oscar for George Seaton. Although the film was nominated for Best Picture, Best Director (Seaton), Best Actor (Crosby), Best Art Direction (black-and-white), and Best Cinematography (black-and-white), all of those awards went to On the Waterfront. That could account for the reason so few people talk about The Country Girl today, but the time is right for giving it a chance. While not perfect, it certainly deserves rediscovery and a Blu-ray release would be most welcome. If you do watch the film, please let me know what you think of it.