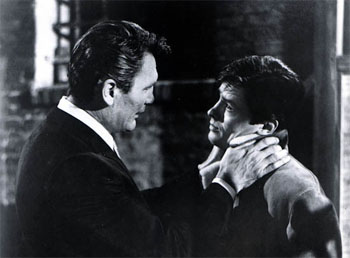 I guess that’s about as believable as Alain Delon and Jack Palance appearing as brothers in the 1965 Ralph Nelson film Once a Thief. This was Delon’s first leading role in an English language film, something Delon wanted badly since he was eager to conquer Hollywood as he’d conquered Europe. Muller mentioned that Delon’s career path mirrored that of Robert Mitchum in many ways: both were orphans, both had a rough go in the military, and both had major issues with authority. It was stated in Delon’s Hollywood contract that he’d have to learn English and although he tried (and managed it in this film), he eventually threw his hands up in disgust and walked away. Back in Europe, however, he orchestrated his own career. Now at 81, Delon is still calling the shots: Muller mentioned that Delon has announced that he will appear in one more film and one more stage play before completely retiring.

Although I enjoyed Once a Thief, it’s far from perfect. Delon plays Eddie Pedak, an ex-con who’s trying to go straight for the benefit of his wife (Ann-Margret) and young daughter, but a San Francisco inspector (Van Heflin) wants to connect Pedak to the murder of a police officer. Sorry, but casting Jack Palace as Eddie’s brother Walter is about as ridiculous as it gets and Ann-Margret’s performance goes way over-the-top. But the film also contains some nice suspense, a good Lalo Schifrin score and an enormously creepy performance by John Davis Chandler as one of Walter’s goons.

Any Number Can Win (1963), says Muller, is a collision of old school film noir with the French New Wave. Directed by Henri Verneuil (who also directed The Sicilian Clan, also showing at the festival) and based on the John Trinian (pseudonym for Zekial Marko, who also wrote Once a Thief) novel The Big Grab, Any Number begins with Charles (Jean Gabin) being released from prison after a five-year stretch for attempted robbery. Although his wife wants him to go straight, Charles isn’t done yet, not by a long shot.

He plans to knock over the casino at Cannes, hiring two assistants: Francis (Delon), a man he met in prison, and Francis’s brother-in-law Louis (Maurice Biraud). The result is a wonderful heist film filled with suspense, humor, and one of the most memorable endings of any crime film. Highly recommended.

There’s more Noir City on the way including a Joan Fontaine double feature, a classic noir, and more.