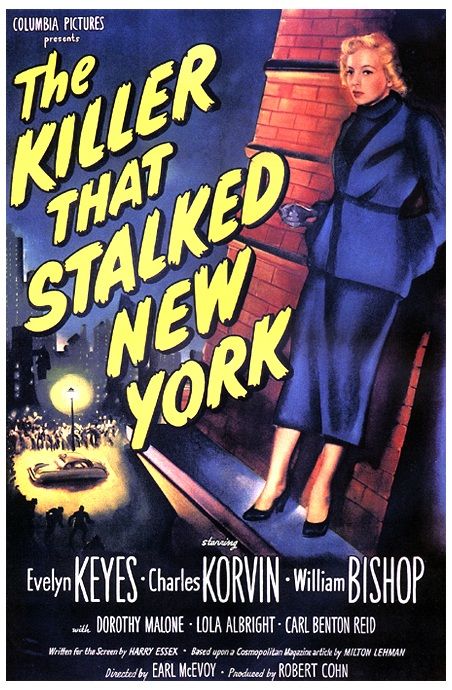 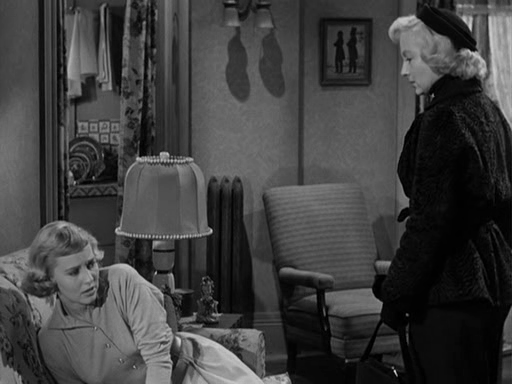 Sheila Bennet (Evelyn Keyes, right) has big plans. She’s just returned to New York from Cuba, where she’s stolen $50,000 worth of diamonds for her husband Matt Krane (Charles Korvin). Their plan is to lay low separately until the feds give up on them, but Matt has a different plan he’s not telling Sheila about: he’s secretly been running around with Sheila’s sister Francie (Lola Albright, left) and plans to ditch them both once he has the money from selling the diamonds.

Sheila’s just started to feel ill after traveling from Cuba. Probably a cold, says her doctor (William Bishop), but we know better: after contacting an infected young girl, Sheila contracts smallpox and inadvertently spreads the highly contagious disease throughout the city.

The Killer That Stalked New York tries valiantly to balance the deadly epidemic story with the love triangle/betrayal story, but starts falling apart at about the halfway point. Although not a great film, Panic in the Streets (also 1950) explores similar themes much more successfully. Yet The Killer That Stalked New York does have Evelyn Keyes going for it, and anytime she appears in a movie, it’s definitely worth watching. The film boasts a great supporting cast including Dorothy Malone, Art Smith, Roy Roberts, Jim Backus, Richard Egan, Beverly Washburn (who appeared in the Star Trek episode “The Deadly Years”) and everyone’s favorite character actor Whit Bissell. For fans of cinematography, the film is also one of Joseph Biroc’s early efforts. Worth a look.

Next: an on-screen tragedy turns into a real-life tragedy in this period noir.