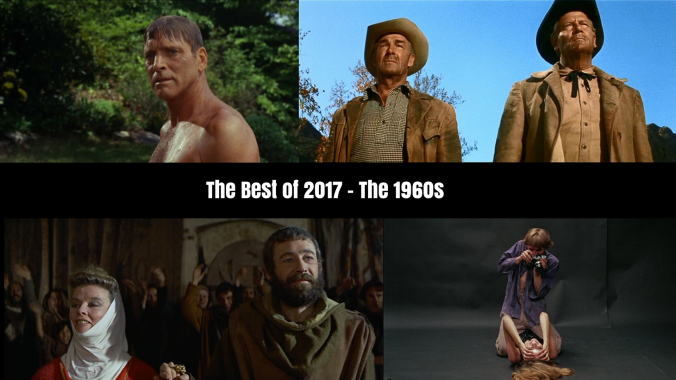 Ah, the decade I was born… So many films I missed and can now watch. Let’s see what turned up: 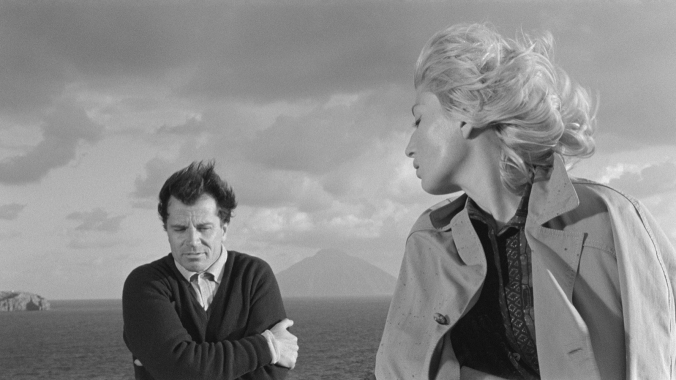 Fair warning: you’ll see this film again on another list. I don’t have any problem placing it on more than one list. It’s probably the film I’ve thought the most about this year. Please, read on. 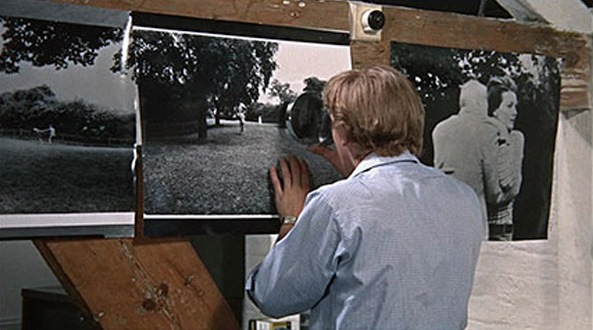 (Here’s another film that could go into more than one category, yet I’m including it here because the film simply cries out “The 60s!”)

The debate continues. Is Blow-Up film noir or is it something else? It played on the Noir City circuit in 2016 (one of the films I was unfortunately unable to attend) but I wonder how many conversations ensued about whether or not it should be included as a film noir. I’m not entirely sure myself.

Put very simply, a London fashion photographer named Thomas (David Hemmings) photographs a couple in Maryon Park. The young woman (Vanessa Redgrave) – obviously seeing an older man, neither of them aware that they are being photographed – tracks down Thomas, demanding the film. Even though the film is over 50 years old, I’m not going to tell you what happens next, other than one thing: after blowing-up the photos, Thomas sees something he wasn’t supposed to see.

I could say so much about this film, but not without at least one more viewing. Roger Ebert wrote a review of the film in 1998, reflecting back on his thoughts on seeing the film just before he became a professional film critic. One year later, he wrote a post called “Corpse from Blow-Up Speaks!” which is required reading for anyone who has seen the film. If it is legitimate, it places the film in an interesting light, to say the least.

Although I only saw it this year for the first time, Antonioni’s L’avventura (1960) will probably become one of my favorite films of all time. Although Blow-Up will probably never make that list, it contains moments that remind me of L’avventura, and moments that seem as if they came from another director. Again, I need to see both films again, as well as much more of Antonioni’s work. I hope you will also. 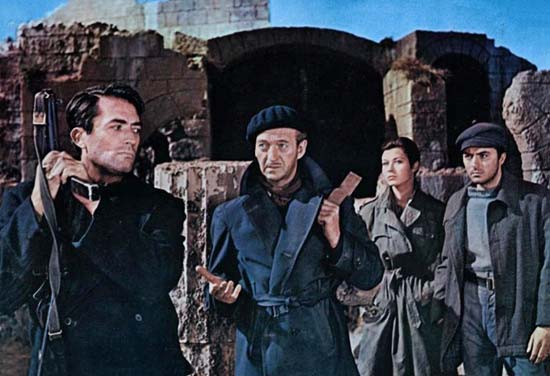 Based on Alistair MacLean’s 1957 novel of the same name, The Guns of Navarone chronicles the mission of an Allied commando team to destroy a German fortress and its two massive guns, thereby seizing control of the island of Navarone where 2,000 British soldiers are being held. That team includes Gregory Peck, David Niven, Anthony Quinn, Anthony Quayle and more, including a cameo by Richard Harris. (It also stars British actor Percy Herbert, who was also in The Bridge on the River Kwai and just about every other film involving the British in WWII during the 50s and 60s.) It’s one of those epic war adventures that I’m sorry it took me so long to see, but it was worth the wait. 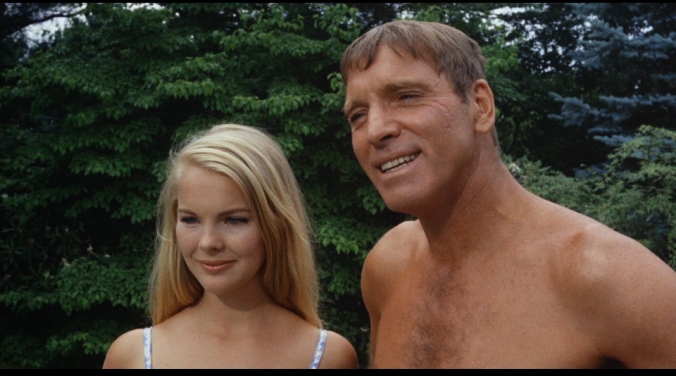 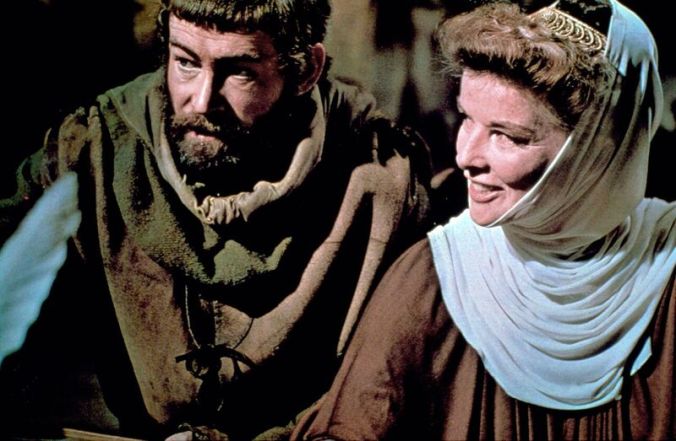 Set during Christmas 1183, King Henry II (Peter O’Toole) must decide which of his sons will inherit the throne: Richard the Lionheart (Anthony Hopkins), Geoffrey II, Duke of Brittany (John Castle) or the youngest son John (Nigel Terry). Henry also allows his estranged wife Eleanor of Aquitaine (Katherine Hepburn) leave from her imprisonment to enjoy the festivities, of which there are plenty, yet few of them what you might call celebratory. Extraordinary film which earned three Oscars – Best Actress for Hepburn (tied with Barbara Streisand for Funny Girl, the only time this has happened in this category), Best Adapted Screenplay for James Goldman, and Best Music Score for John Barry.

It was director Sam Peckinpaw’s second film and star Randolph Scott’s (above left) last, after a career that spanned over 100 films. The film stars another guy who’d made a few movies in his time, Joel McCrea (above right) as Steve Judd, an ex-lawman who’s seen better years and probably should pack it in and go home, but agrees to guard a gold shipment from a mining camp to the town of Hornitos, California. Judd’s friend Gil Westrum (Scott), along with the young Heck Longtree (Ron Starr), agree to help. Ride the High Country contains elements of the traditional western combined with the new directions the genre would take, some from the hands of directors like Peckinpaw. The new Warner Archive Blu-ray is excellent. 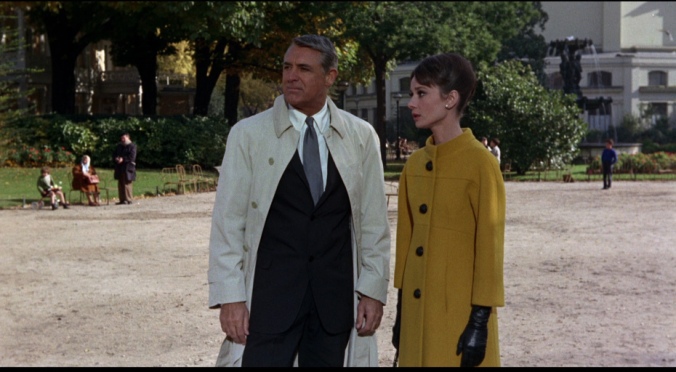 Often called the best Hitchcock film Hitchcock never made, Charade is an effective mystery/thriller/romance/comedy starring Cary Grant and Audrey Hepburn. The less I tell you about the plot, the better, but I will say that the film also stars Walter Matthau, George Kennedy, James Coburn, Ned Glass and features music by Henry Mancini. You’ll be glad you watched it. Cary Grant’s next-to-penultimate film. (There should be a better term for that, and probably is; I just don’t know it.) 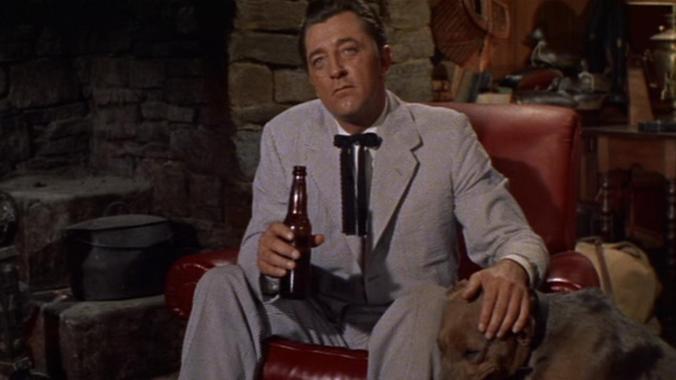 In the opening of Home from the Hill, Captain Wade Hunnicutt (Robert Mitchum), a wealthy East Texas landowner, gets shot by man while out with a hunting party. The man claims Hunnicutt, despite being married to his gorgeous wife Hannah (Eleanor Parker), has been seeing the man’s wife. Hunnicutt is a womanizer and everyone in town knows it, including his illegitimate son Rafe Copley (George Peppard). Yet Hannah has tried to shield Theron (George Hamilton), Hunnicutt’s real son with her, from full knowledge of his father’s shenanigans. The rest of the film is one of those epic family sagas that I typically don’t like, but the actors are superb, the script is good, the Milton Krasner cinematography is beautiful, and Vincente Minelli’s direction combine to make this two-and-a-half hour family drama nothing short of riveting.

In 1875, Charles Dexter Ward (Vincent Price), the great-great-grandson of a warlock named Joseph Curwen, comes to the town of Arkham having inherited the Curwen palace. No matter than Curwen put a curse on the entire town of Arkham and its descendants for burning him over 100 years earlier. Does the spirit of Curwen live on inside the palace? (If not, we’re looking at a 15-minute movie, so the answer is yes!) Although marketed as an Edgar Allan Poe film, this one is really an H.P. Lovecraft story all the way. The Haunted Palace is wonderfully atmospheric and features yet another excellent performance by Vincent Price as well as appearances by Lon Chaney Jr., Elisha Cook Jr., and Debra Paget in her final film role. The film also earns the “Most Green Make-Up Used in a Movie” award for 1963. (Check out Lon Chaney Jr’s mug in the photo above.)