Jack Warner just didn’t get it. He couldn’t understand what all the fuss was about over Humphrey Bogart, despite the fact that the actor’s portrayal of Rick in Casablanca was one of the main reasons Warner was able to take home the Oscar for Best Picture. So what was Bogart’s reward for delivering such a performance? Eddie Muller provided the answer: playing a wife-killer who’s obsessed with his dead wife’s sister.

Conflict (1945) certainly lived up to its name. The film was based on the story “The Pentacle” by Robert Siodmak and Alfred Neumann, but a plagiarism suit kept the film from being released in 1943 as intended. You have to wonder how the film might have been received in 1943, released before such noir standards as Double Indemnity, Laura, Phantom Lady, Murder, My Sweet, and The Woman in the Window. We’ll never know that, but we do know that the story of a man killing his wife so he could run off with her much-younger sister may have hit a little too close to home for Bogart. At the time, Bogart and his wife, actress Mayo Methot, were having so many fights they became known in the press as “The Battling Bogarts,” with their marriage sometimes referred to as “the sequel to the Civil War.” Plus, by the time Conflict was finally released in 1945, Bogart (at age 44) had already begun a relationship with his To Have and Have Not (1944) co-star Lauren Bacall (at age 19). Well, now…

As you might imagine, Bogart hated Conflict and named it, along with 1947’s The Two Mrs. Carrolls, as his least favorite films. Although not without problems, Conflict is a very effective noir with a nifty role reversal: Bogart plays the villain, while Sydney Greenstreet plays a character on the right side of the law for a change.

In the Republic “B” picture Jealousy, Jane Randolph plays Janet, a spunky cab driver working to support her out-of-work husband Peter (Nils Asther), a Czech immigrant whose writing career has stalled since coming to America. Janet meets a doctor named Brent (John Loder) who falls hard for her. Sure, Janet’s still married to Peter (who’s practically suicidal), but Brent has no ties to anyone. No, his medical practice partner Dr. Monica Anderson (Karen Morley) means nothing to him, nothing whatsoever… 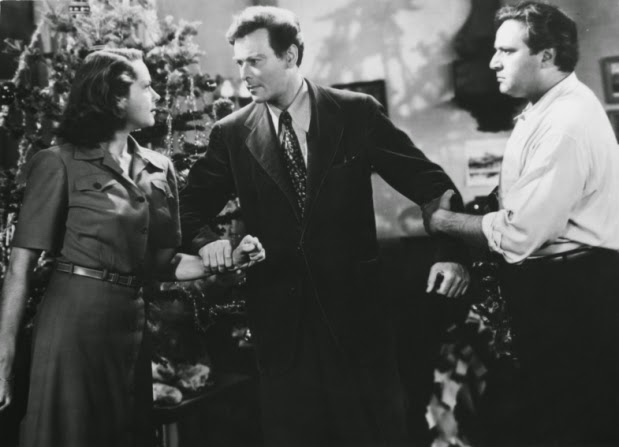 This noir love triangle film was filled with expatriates (including Hugo Haas and the Swedish actor Nils Asther, known as the “male Greta Garbo”) and directed by Gustav Machatý, who was also a Czech immigrant. Machatý was a prodigy who worked with both D.W. Griffith and Erich von Stroheim and made his first film at age 18. (Machatý most famously directed Hedy Lamarr in the 1933 film Ecstasy.) Unfortunately Machatý labored mostly in obscurity in Hollywood and spent the last several years of his life teaching film in Munich. Do seek out Jealousy if it comes to a festival near you. You’ll be glad you did.

Next time: the return of Ladd and Lake, plus one of the baddest femmes fatales of the 1940s.