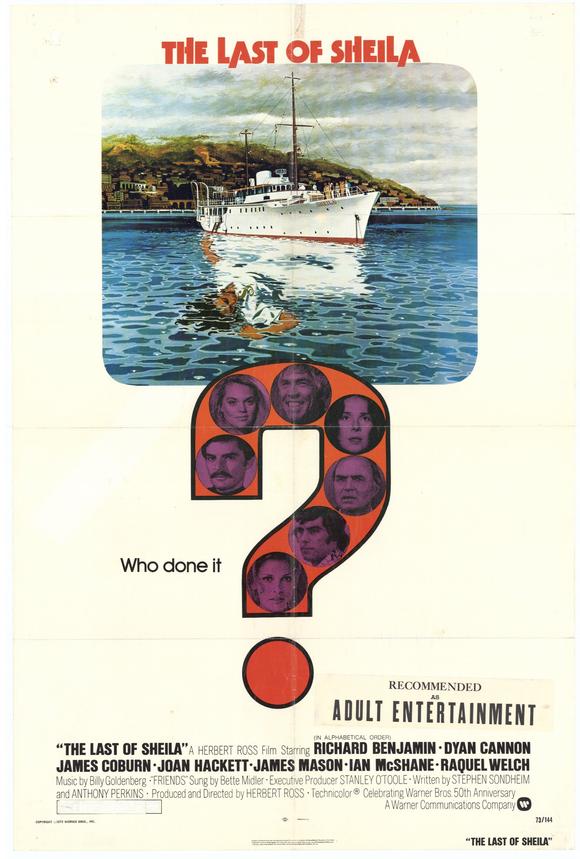 The Last of Sheila (1973)
Directed and produced by Herbert Ross
Written by Anthony Perkins, Stephen Sondheim
Cinematography by Gerry Turpin
Viewed on FilmStruck
(1:59)

“Civilization is but a thin veneer stretched across the passions of the human heart.” – Bill Moyers

I have a good friend whose brother is a Hollywood screenwriter. I won’t tell you his name, but you’ve probably seen his work. My friend has related several horror stories about his brother’s experiences with the writing life in Hollywood. None of these stories have been very surprising; they simply confirm what I’ve suspected for years about the way things work and how people behave (or rather misbehave) in the industry. I have no doubt there are some very nice folks working in Hollywood, but I’m also sure the place is filled with rude, narcissistic, arrogant, petty, crass, and generally unlikable people, exactly like the characters in The Last of Sheila. Maybe we actually look forward to one (or more) of these self-centered jerks meeting their comeuppance? 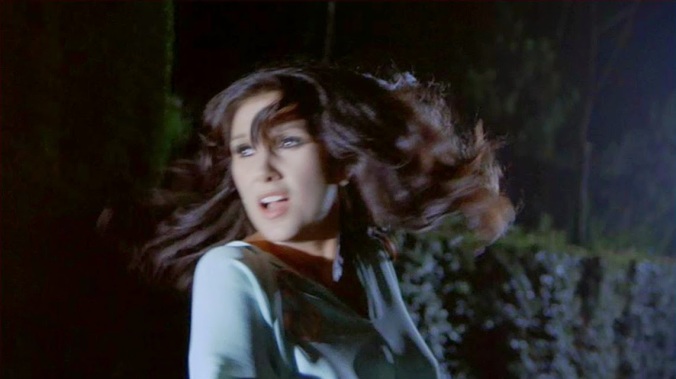 In our film, a Hollywood gossip columnist named Sheila (Yvonne Romain) walks out of a Bel-Air party and is killed by a hit-and-run driver (whose identity we cannot see). Flash forward one year later: Sheila’s husband, movie producer Clinton Greene (James Coburn), is giving his grief a respite, one long enough to invite several friends to join him on his yacht for a cruise: six people who were present at the party the night Sheila was killed.

During their week-long cruise, everyone onboard will play “The Sheila Greene Memorial Gossip Game,” which works like this: Greene assigns each of his guests an index card containing a secret that must be guessed by the others. The yacht will stop at a different Mediterranean port every night, with each stop hiding clues leading to the identity of the person with that night’s particular secret. The object of the game is to uncover each person’s secret while protecting your own. But these secrets are just pretend secrets, right? If I get a card that says “You are a hit-and-run driver,” that doesn’t necessarily make me a hit-and-run driver, does it?

An added incentive to play the game comes as no surprise: all of Greene’s guests could be a part of his upcoming film project called (what else?) “The Last of Shelia.” 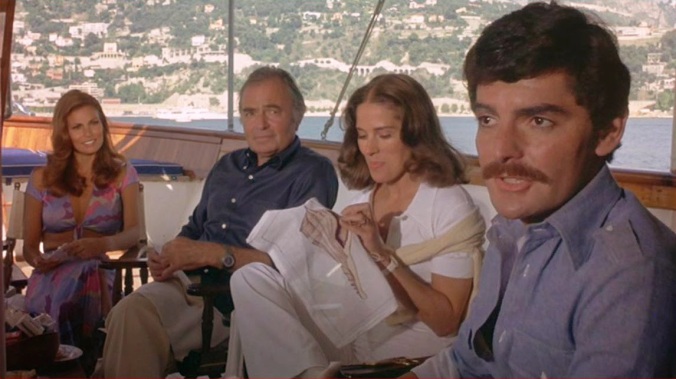 Fans of these types of “whodunit” pictures will immediately think of movies like Sleuth (1972) as well as numerous series such as the Charlie Chan films or the various adaptations of Agatha Christie novels. Yet The Last of Shelia turns the tables on these familiar films in many ways, offering several surprises you could never tempt me to disclose. Greene challenges his guests (and us) to be smart, to pay attention. He drops clues (or are they red herrings?) to them and to us, if we’re smart enough to pick them up. 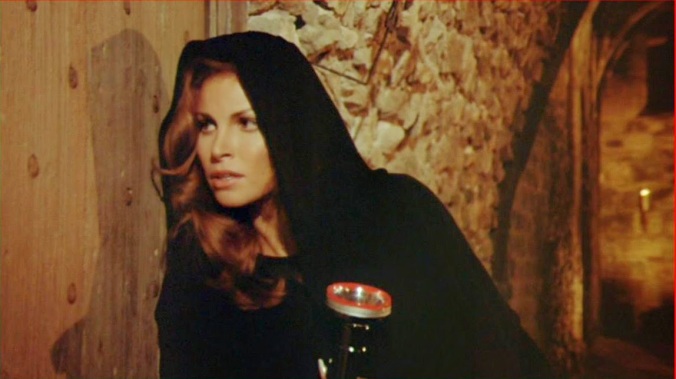 One of the more enjoyable aspects of the Agatha Christie adaptations (particularly the ones with Peter Ustinov as Hercule Poirot) is the ability of its actors to bring to life characters who were often dull or underdeveloped in Christie’s novels. The characters were at least as interesting as the plots in those films, and frequently more so. The same is true with The Last of Sheila. None of these characters are very likable, but the actors portraying them are each killing it (no pun intended) without being over-the-top. (Even Welch, who’s not very good here, is playing a movie star who’s probably not very good either. Or maybe that means Welch is simply good at playing a bad actress? Hmmm….)

Dyan Cannon as Christine (a character based on Hollywood agent Sue Mengers, whose client list actually included Cannon) appears to be taking her performance way over-the-top, but you soon realize that Christine’s job as a talent agent calls for her to be over-the-top, brash, loud, bossy, and demanding. When a near accident (perhaps a murder attempt?) happens near Christine, the camera follows her longer than necessary, not to advance the plot, but to reveal more of her character. James Mason’s performance as a has-been movie director may seem too subdued and distant, but what else would you expect from a director who’s hit bottom with yet another failure? Mason isn’t underacting; he’s totally in character.

And then there’s James Coburn as Greene, the mastermind of the entire endeavor. I grew up watching Coburn, always sensing in every movie that behind that trademark grin, he was planning on screwing somebody over. Here as Greene, he seems to have planned everything meticulously, setting up a house of cards that his guests will have the misfortune of knocking down to their own demise.

We think we know where the film is going, but we probably don’t. I’m betting most viewers will be surprised at least once, perhaps more often. Greene’s game is contrived, but the film doesn’t feel contrived. You get the feeling that if someone actually decided to put on such an adventure, it might play out exactly like the one we’re watching. 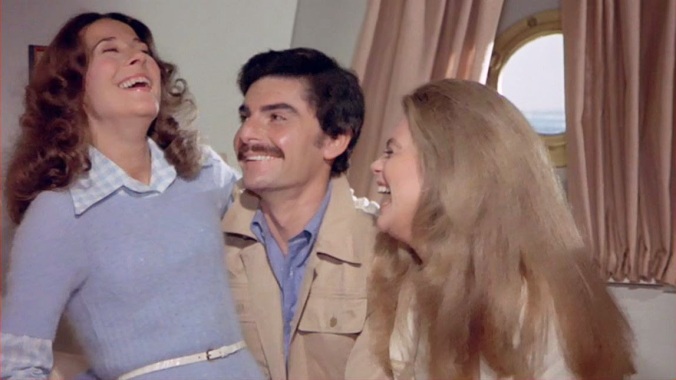 And perhaps it did. The movie is based on actual scavenger hunts orchestrated by the film’s writers Anthony Perkins and Stephen Sondheim, which included guests such as Lee Remick and George Segal. You have to wonder how much of the shortcomings of the real-life participants turned up in the script. Director Herbert Ross said about the film, “It’s about civilization and barbarism.”1 All the characters onboard have at least one secret they’re trying to conceal, but don’t we all? The Last of Sheila is never preachy, not for a moment, but you can’t help thinking that throughout the fun and mystery, this could be a film about all of us.

It’s very possible that you’ve never heard of The Last of Sheila. It has quite a backstory, including the problems shooting it (featuring some major issues with Raquel Welch) and the way it confused audiences and critics. If you’d like to read more, Dyan Cannon was interviewed for the film’s 40th anniversary in 2013, and I discovered an excellent review at Le Cinema Dreams,  which discusses several aspects of the film, including why it was probably too smart for its time. It can (and should) be appreciated now for its wit, excellent performances, direction, pacing and humor. The film is available as a Warner Archive DVD (MOD) and is currently streaming on FlimStruck. (Thanks to Pure Cinema Podcast for making me aware of this film.)