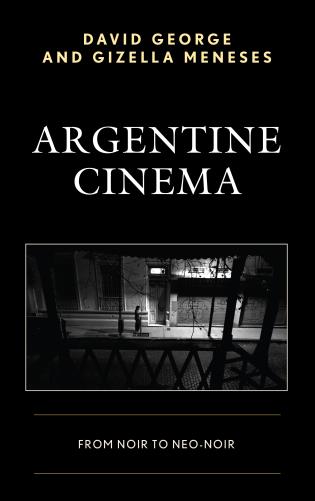 Before an examination of Argentine noir, David George and Gizella Meneses, the authors of the new book Argentine Cinema: From Noir to Neo-Noir (Lexington Books, ISBN 9781498511865), open with a brief overview of classic film noir and neo-noir. For most people picking up this book (which is probably not a casual purchase, with a retail price of $90), the authors’ brief summary of noir will serve as a refresher. After this introductory chapter, George and Meneses examine how film noir developed specifically in Argentina. If your Argentine history isn’t quite up to speed, no worries: you’ll learn about the Juan Perón era (as president from 1946 to 1955) and the country’s years of instability, Perón’s later exile and return to power, the influence of crime fiction in Latin America, and what Paul Schrader refers to as the “rips and tears in the social fabric” of the country (p. 24). All of this is presented in a way that makes you want to read more, especially considering how these events were reflected in the movies of the era. Although its wartime and postwar history is different from that of the United States, Argentina was prime real estate for the construction and development of film noir.

First, a word or two about finding and watching the film. As far as I can tell, El ángel desnudo has never been released legitimately on DVD or Blu-ray anywhere in the world. I found at least four uploads of the film available on YouTube, none of them containing English subtitles. So I watched the movie in Spanish, a language I don’t speak or read. Even though I didn’t understand at least 95% of the dialogue, I was visually able to gather most of the main plot elements. The George/Meneses book cleared up the rest.

The opening credits of The Naked Angel emerge superimposed over a background of waves crashing on the beach, setting the stage for turmoil, conflict, and violence, elements that won’t be long in coming. Cut to a disorienting shot of a man’s footsteps, frantically walking across square tiles. He’s clearly searching for someone when the camera moves upward; a mysterious figure hands him a note and says, “It’s been over a week since the fellow left on a trip and I repeat that we don’t know where.”

A quick series of events leads the recipient of the note to Paris, where a formal ceremony is taking place to honor the winner of Le Grand Prix d’Honneur in art. The man from the film’s opening walks briskly alongside the long banquet table, pulls out a gun, and assassinates the guest of honor. It’s an abrupt moment of sudden violence, no doubt shocking even for 1946 Argentine audiences, a scene that grabs the viewer’s attention quickly. Violence – particularly murder – tends to transcend language barriers.

The police pick up the assassin we’ve been following, a man named Gaspar Las Heras (Eduardo Cuitiño). It comes as no surprise to film noir fans when Las Heras begins to tell his story in flashback. We see Las Heras in Buenos Aires at a gambling house poker game. We don’t have to understand the language to know that Las Heras has a gambling addiction, is probably a frequent loser, and is here being set up by the other players.

The next day, however, he presents his daughter Elsa (Olga Zubarry) with a new car for her seventeenth birthday. The darkness of the previous scenes has vanished, replaced with the brightness of the handsome Las Heras home, complemented by a cheery, carefree soundtrack. (Change the location and language, and we could easily be in upper-middle class Eisenhower-era America.) Elsa’s clean-cut boyfriend Mario (Carlos Cores) also arrives to celebrate Elsa’s birthday. It is only with the appearance of Las Heras’s sister Diana (Fedel Despres) that we sense real trouble brewing. Soon Diana – whom we at first take to be Herea’s wife and not his sister – begins to berate her brother for throwing his money away on a car for Elsa, then berating Elsa herself for her seeming ingratitude. Something’s definitely not right in this family…

The celebration is further strained when a visitor named Vargas (Ángel Orrequia) arrives. Vargas, Las Heras’s business partner, has bad news (which he discloses only to Las Heras): their business is bankrupt. Yet Las Heras discovers a way out. A wealthy sculptor named Guillermo Lagos Renard (Guillermo Battaglia) will gladly pay Las Heras 50,000 pesos if Elsa will pose nude for him.

In her bedroom, Elsa finds a letter from her father. (Letters, notes and other written communication play a huge part in the film, so if you read Spanish, you’re certainly ahead of the game.) Las Heras pleads with his daughter to accept Renard’s offer, despite the fact that the middle-aged sculptor comes across as libidinous, lecherous and just plain offensive. According to Las Heras, there’s no other way to keep the family from ruin.

Although the film is available online only in Spanish and in substandard uploads, I won’t reveal the plot any further, although I will point out a few of the excellent noir moments. Early in the film, Las Heras encounters a statue of the Greek character Actaeon, a man who was turned into a stag and was devoured by his own hunting dogs. As Las Heras observes the statue (which is symbolic of what’s happening to Las Heras), we see one side of his face illuminated, the other darkened, a contrast showing dual sides of dread and anger. Another scene (echoing the opening) features Elsa and Mario on the beach at night. The waves are crashing as darkness and clouds pass over the moon, preparing for the darkness of Elsa’s inevitable meeting with the sculptor.

The nudity in The Naked Angel actually doesn’t amount to much, but it created quite a lot of controversy at the time. The promotional shot at the beginning of this review doesn’t appear in the film at all and when we do see Elsa (Olga Zubarry was only 16 at the time of filming) disrobe, we see only her back from the waist up. Without giving anything away, the next moments include several quick cuts, deceptive moments that director Carlos Hugo Christensen was smart enough to work to this advantage in drawing audiences into theaters. In fact, the only real nudity comes from a statue of the Roman goddess Diana (who shares the same name as Las Heras’s sister; not a coincidence).

Regardless of the amount of nudity (or lack thereof), The Naked Angel is a powerful film that combines sexual obsession with abuse, themes that never could’ve been produced in an American film of the time. Although the movie may contain too much melodrama for some noir enthusiasts, its other elements – particularly the suggestion that Las Heras’s helplessness and subjugation to Renard – present a commentary on the oppressive policies and practices of the Perón regime. Noir fans will also find themes of moral ambiguity, fatalism, deception, and betrayal as well as visual noir touches of elongated shadows, asymmetrical framing, and more. Let’s hope that a Blu-ray and/or DVD release of the film is in the works soon.