If you’re new to my monthly Film Noir Releases posts, welcome! My goal is to cover all the first-time releases to Blu-ray and DVD, usually passing over reissues unless there’s a good reason to include them. (I also tend to leave out more recent films from the last several years.) Unless otherwise noted, the following are all North American Region A Blu-ray discs. I often use the terms “film noir” and “neo-noir” rather loosely, so while you may quibble with some of my choices, I hope these are films you’ll at least consider. As always, if you know of any film noir or neo-noir films I’ve left out, please let me know in the comments below. And thanks for reading.

As was the case last month, many of June’s must-have film noir releases come from Europe. I know many of you are resistant to purchase a region-free Blu-ray player, but I’ve had at least four people contact me this year about such players. Three of them have made purchases (I think the fourth will take the plunge soon) and have been very satisfied. With all of these great European (especially UK) releases cropping up each month, it’s hard to resist having a player that gives you access to such wonderful films.

Enough of my pitch! Although June is a light month for new releases, we still have plenty of temptations, including several films making their Blu-ray debut. Let’s take a look:

First time on Blu-ray. The Biddle brothers, Ray (Richard Widmark) and Johnny (Dick Paxton) are in a prison hospital after receiving gunshots during an attempted robbery. The more severely injured Johnny dies while under the care of Dr. Luther Brooks (Sidney Poitier), the prison’s first black doctor. Ray, claiming that his brother would still be alive if he’d had a white doctor, vows revenge. This Joseph L. Mankiewicz film – one of his finest – has lost none of its power or relevance since its 1950 release. The disc includes an audio commentary by film noir historian Eddie Muller (which by itself makes this a must-own), a two-part documentary (originally broadcast on French television in 1983) All About Mankiewicz (103 minutes), the original theatrical trailer, and a booklet featuring a new essay by Glenn Kenny. Don’t miss this one if you have a region-free player, and if you don’t have one, you should seriously consider it.

First time on Blu-ray. Want more Sidney Poitier? No problem. Although it’s one of the most Oscar-nominated film noir movies of all time (nine nominations and two wins for screenplay and cinematography), The Defiant Ones is a picture that’s rarely discussed these days. Sure, it’s probably considered more of a crime movie than a film noir, but like No Way Out, its power hasn’t diminished. Noah Collen (Poitier) and John “Joker” Jackson (Tony Curtis) successfully escape prison, yet are chained together while on the run. The two men loathe one another, but the film isn’t played for laughs; these guys want to kill each other just as much as they want their freedom. Although at this point, Poitier had been recognized as a fine actor for years, Curtis proved here that he was no second-rate player. Both men were nominated for Best Actor Oscars. Although not loaded with extras, the disc includes a new video interview with critic and author Kim Newman.

First time on Blu-ray. When a millionaire (Michael Forest) is discovered dead from an apparent heart attack (combined with drugs and high-energy sex), a videotape is found of the man and his mistress Rebecca (Madonna), who becomes the prime suspect after receiving $8 million from the will. Enter defense attorney Frank Dulaney (Willem Dafoe) who seems totally unable to avoid Rebecca’s enticements. It’s been awhile, but I remember this being more erotic than noir, but you can’t argue with the cast, which also includes Joe Mantegna, Anne Archer, Julianne Moore, Jurgen Prochnow, Frank Langella, and more. This release includes both the R-rated (Standard Definition) and unrated (HD) versions of the film as well as a featurette called “Love or Murder,” a trailer, and a stills gallery.

(This set was previously available in the U.S. on DVD from Sony, although I’m not sure if the extras are exactly the same.)

Don’t get me wrong: I’m very excited about this release, but you should know that only two of the seven films in this set are directed by Samuel Fuller. The others (some of them excellent) were written by Fuller or adapted from his writing. I won’t go into the details of each film simply because I haven’t seen them all. The first disc contains three films: It Happened in Hollywood (1937), co-written by Fuller, Adventure in Sahara (1938), based on a Fuller story, and Power of the Press (1943), also based on a Fuller story. I’ve seen none of these, so I’m afraid you’re on your own for the first disc. The second includes Shockproof (1949), featuring a Fuller script directed by Douglas Sirk, and Scandal Sheet (1952), directed by Phil Karlson based on Fuller’s novel The Dark Page. Both films are excellent. (Click on the links to read more.) Fuller finally gets a chance to direct with The Crimson Kimono (1959) and Underworld U.S.A. (1961), both hard-hitting, unsentimental films that really stick with you. (Both films were also previously released on Blu-ray in the U.S. from Twilight Time.) You can find out more details on the box set’s extras here. If you’re familiar with the outstanding work being done by Indicator (and if you own a region-free player), picking up this set is a no-brainer. 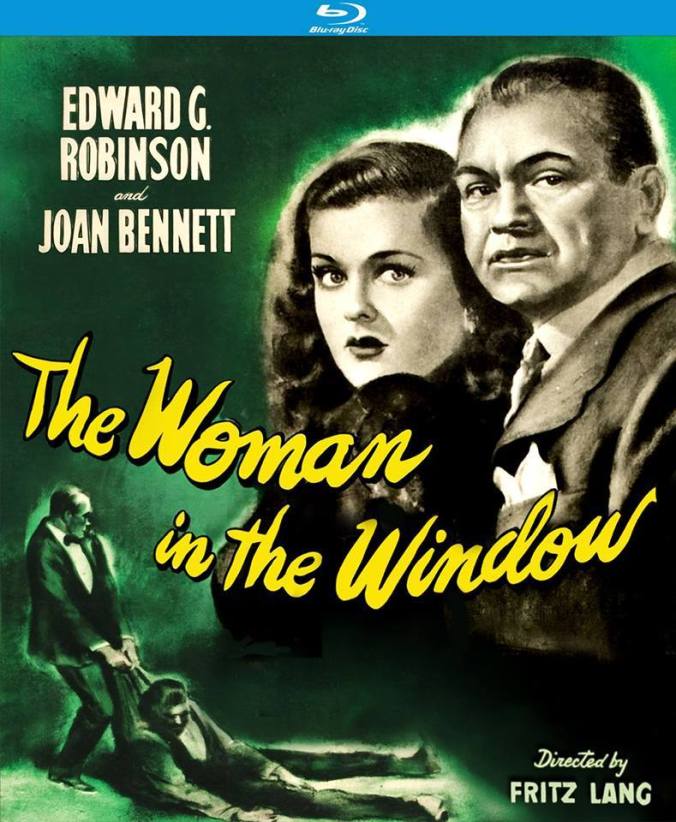 Everyone reading this post will most likely know that Fritz Lang’s The Woman in the Window is frequently cited as one of the top film noir movies of all time. For those who many not be familiar with the story, Edward G. Robinson plays a college professor named Wanley who becomes obsessed with a portrait displayed in the window next to Wanley’s men’s club. To his surprise, he meets the woman in the portrait, a meeting which begins innocently enough, yet ends in murder and blackmail.

Kino’s website states “Newly mastered in HD!” which probably means this was not a 2K or 4K restoration. The film was previously released on Blu-ray in Spain in 2015, but I’ve heard no reports as to its quality. The new Kino release offers only two special features: a theatrical trailer and an audio commentary by film historian Imogen Sara Smith, which is reason enough to pick up this disc.

First time on Blu-ray. Not to be confused with the Brian De Palma film from 1976, this Jean Delannoy picture follows Helene (Michèle Morgan) and Aldo (Raf Vallone), husband and wife trapeze artists in a circus. When Aldo is injured, his former partner Alex (Jean Gaven) steps in to keep the show going. When Alex turns up murdered, Helene is convinced her husband committed the crime. Delannoy’s first color film is based on the short story “Silent as the Grave” by William Irish (a.k.a. Cornell Woolrich). Alas, no English subtitles.

I include Disorganized Crime on this list, knowing that it probably contains few genuine noir elements, other than a heist. It looks as if it’s primarily a comedy featuring a large 80s cast, many of whom are no longer with us or no longer working. I doubt this will be for me, but I may give it a look. The previous 2011 release from Mill Creek contained no bonus features. This one probably won’t either.

That’s going to do it for June. As always, if I’ve missed any other releases, please let me know in the comments section below. Happy watching!