Clara Calhoun (Jane Randolph, above, 2nd from left) is having a rough day. She’s tired of operating a beauty shop in New York, lying to her aging customers as they leave, telling them that men won’t be able to keep their hands off them now. Good thing Clara’s got a little bookmaking operation going on in the back room.

It’s a good thing, that is, until two masked gunmen enter the shop. When a cop happens upon the robbery and gets killed in a shoot-out, the two gunmen escape in a stolen laundry truck. But one of gunmen has a bullet in him and is forced to stay with the truck while his partner (John Ireland) escapes. The injured robber decides to implicate the owner of the truck, a clean-nosed kid named Steve Ryan (Ed Kelly, below left). 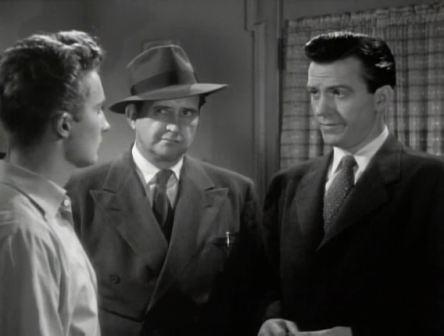 But Steve’s not worried. It should be easy to prove he had nothing to do with the break-in or the death of a cop. Easy, right? Oh, Steve… Somebody’s got it in for you, dude…

END_OF_DOCUMENT_TOKEN_TO_BE_REPLACED

(I’ve decided to try to post at least a short review of each film noir I watch in Noirvember. Some will be short, some will be longer. Hope you enjoy them!)

As David J. Hogan points out in his book Film Noir FAQ, He Walked by Night and Jules Dassin’s The Naked City (also 1948) both work as police procedurals, but He Walked by Night contains far more noir elements, thanks in large part to John Alton’s brilliant cinematography of on-location Los Angeles.

END_OF_DOCUMENT_TOKEN_TO_BE_REPLACED

A woman named Pat (Claire Trevor, middle) goes to visit her man Joe (Dennis O’Keefe, right) in prison. Before she can see him, a prison official informs Pat that she’ll have to wait: Joe has another visitor that’s already talking to him. Pat is shocked to find a beautiful young social worker named Ann (Marsha Hunt, left) exiting the visitors area, but goes on in to see Joe to discuss her upcoming role in helping him escape.