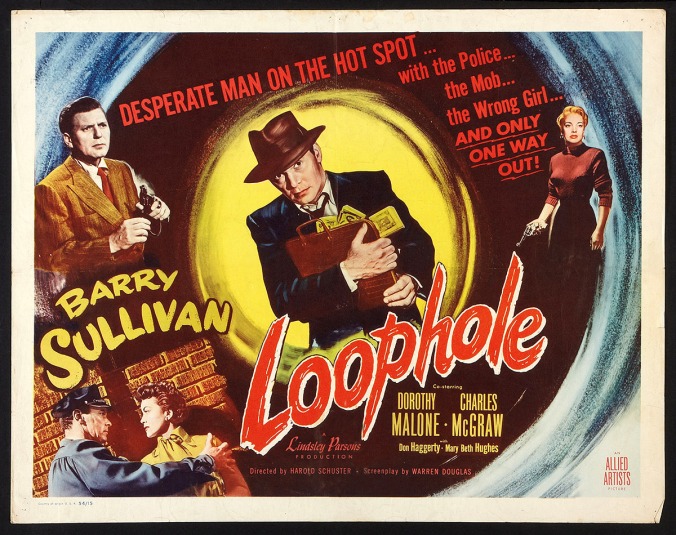 You’re accused of stealing from the bank where you work. And Charles McGraw is after you. Which is worse? It doesn’t matter; you have to deal with both problems in the film noir gem Loophole, reviewed here.

While you’re waiting on the Criterion release of Detour (1945) in a few days, should you consider another Edgar G. Ulmer low-budget film noir? Here’s my verdict.

Western or film noir? Both? Neither? Please read on…

If you’re new to my monthly Film Noir Releases posts, welcome! My goal is to cover all the first-time releases to Blu-ray and DVD, usually passing over reissues unless there’s a good reason to include them. (I also tend to leave out more recent films from the last several years.) Unless otherwise noted, the following are all North American Region A Blu-ray discs. I often use the terms “film noir” and “neo-noir” rather loosely, so while you may quibble with some of my choices, I hope these are films you’ll at least consider. As always, if you know of any film noir or neo-noir films I’ve left out, please let me know in the comments below. And thanks for reading.

Just a few weeks ago, things looked pretty bleak for May releases, but several new titles have been announced in the last few days. More may be on the way; if so, I’ll be sure to update the post. But what we have so far looks pretty interesting… Let’s have a look:

END_OF_DOCUMENT_TOKEN_TO_BE_REPLACED

Out of the Fog (1941)
Directed by Anatole Litvak
Produced by Hal B. Wallis
Screenplay by Robert Macaulay, Robert Rossen, Jerry Walk
Based on the play Gentle People by Irwin Shaw
Cinematography by James Wong Howe
Warner Bros. DVD (1:32)

When I was looking for that all-important fourth film in the recent 4 for $44 sale at the Warner online store, the names Ida Lupino and John Garfield initially pulled me in. (I’d greatly enjoyed them both in The Sea Wolf, a film I’ve already seen twice this year.) Then when I noticed the film also includes two other favorites, Thomas Mitchell and John Qualen, I was sold.

END_OF_DOCUMENT_TOKEN_TO_BE_REPLACED

(Southside 1-1000 is the third in a series of four film noir titles I recently purchased from Warner Archive. I previously discussed Riffraff [1947] and The Threat [1949]. Look for a review of Out of the Fog [1941], the final film in this set, very soon.)

The list of movies King Brothers Productions planned to make but didn’t is nearly as long as the ones they did produce, and of those films, I’d love to see them all. (And if there’s a King Brothers biography out there [I can’t find one], I’d certainly buy it.) For nearly 20 years, the King Brothers broke all the rules, employing blacklisted writers in the 1940s and 50s, publicly trading their company, and creating several good films including one masterpiece, Gun Crazy (1950). Southside 1-1000 was the first film the King Brothers made after Gun Crazy and while it’s not in the same league with that film (What film is?), it’s definitely worth a look, especially for film noir fans.

END_OF_DOCUMENT_TOKEN_TO_BE_REPLACED

(The Threat is the second in a series of four film noir titles I recently purchased from Warner Archive. Riffraff [1947] was the first in that series.)

It’s been called “The poor man’s White Heat,” featuring a standout performance by film noir icon Charles McGraw, but are those reasons enough to recommend The Threat, a 67-minute B picture?

END_OF_DOCUMENT_TOKEN_TO_BE_REPLACED

The Last of Sheila (1973)
Directed and produced by Herbert Ross
Written by Anthony Perkins, Stephen Sondheim
Cinematography by Gerry Turpin
Viewed on FilmStruck
(1:59)

“Civilization is but a thin veneer stretched across the passions of the human heart.” – Bill Moyers

I have a good friend whose brother is a Hollywood screenwriter. I won’t tell you his name, but you’ve probably seen his work. My friend has related several horror stories about his brother’s experiences with the writing life in Hollywood. None of these stories have been very surprising; they simply confirm what I’ve suspected for years about the way things work and how people behave (or rather misbehave) in the industry. I have no doubt there are some very nice folks working in Hollywood, but I’m also sure the place is filled with rude, narcissistic, arrogant, petty, crass, and generally unlikable people, exactly like the characters in The Last of Sheila. Maybe we actually look forward to one (or more) of these self-centered jerks meeting their comeuppance?

END_OF_DOCUMENT_TOKEN_TO_BE_REPLACED

This past weekend, the AFI Silver Theatre and Cultural Center in Silver Spring, Maryland launched a series called Directed by Michael Curtiz, running March 17-25. Alan K. Rode, author of Michael Curtiz: A Life in Film, was on hand to introduce The Breaking Point, The Adventures of Robin Hood, The Sea Wolf, and to participate in a panel discussion with Meredith Hindley (Destination Casablanca) and Noah Isenberg (We’ll Always Have Casablanca) on Casablanca. I was able to attend yesterday’s screening of The Sea Wolf, a film I saw and reviewed back in January.