If you missed the previous installments of The Beckie Project, or are wondering what in the world it is, you can get caught up with Parts I, II, and III. Continuing now with Part IV, which may be the most interesting pairing we’ve run across so far. (These discussions may include SPOILERS.)

Beckie’s pick for me: Me and Earl and the Dying Girl (2015) directed by Alfonso Gomez-Rejon

My pick for Beckie: Paris, Texas (1984) directed by Wim Wenders

As was the case with Part III, here are two films that seem worlds apart. Heck, they’re over 30 years apart! Yet similar themes crop up in both films and Beckie and I each found something in the other person’s movie that made us mad.

I initially found Me and Earl and the Dying Girl too clever for its own good, too snarky, too self-aware and too “cool.” I also found parts of it too unbelievable and many of its characters too one-dimensional. Based on the book of the same name (which some of my co-workers admit suffers from some of the same weaknesses I just mentioned), Me and Earl and the Dying Girl is about a teenager named Greg (Thomas Mann, above left) who goes through high school being as invisible as possible, yet trying to trick his classmates into thinking he fits into every clique of the student body without really belonging to any of them. Greg’s mom (Connie Britton) tells him that he needs to befriend his classmate Rachel (Olivia Cooke, above right), who has just been diagnosed with leukemia. Greg, of course, would rather not. 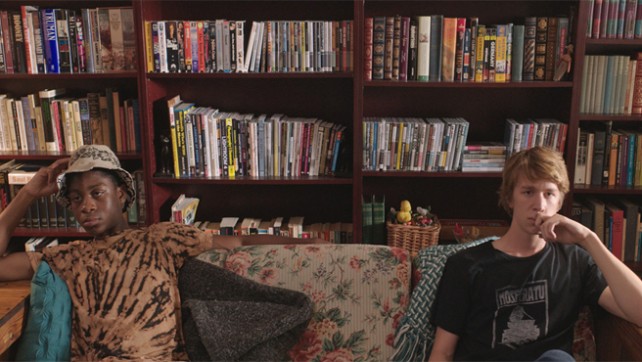 Greg also has a friend named Earl (RJ Cyler, above left), but calls Earl a “co-worker,” since they make films together, take-offs on art films (such as A Sockwork Orange [A Clockwork Orange], 2:48 Cowboy [Midnight Cowboy], A Box O’ Lips, Wow [Apocalypse Now], Breathe Less [Breathless], and my favorite, The Turd Man [The Third Man], to name just a few. You can find more here) I would’ve welcomed a movie devoted just to Greg and Earl’s films, but that’s not the focus of the film.

Neither is character development, at least supporting character development. Earl is hardly fleshed out at all and seems to exist only in order to present a tired movie cliche: the black supporting character from the wrong side of the tracks who dispenses much-needed wisdom to the white main character. I found this enormously irritating, making Earl a piece on a game board rather than a character. The same goes for Greg’s father (Nick Offerman), Greg’s teacher Mr. McCarthy (Jon Bernthal), and probably a couple of others as well.

I know a lot of people will disagree with my assessment of the film so far, but allow me to say two positive things about the film:

First, Me and Earl and the Dying Girl contains two scenes of enormous power and honesty. One involves Greg arguing with Rachel before walking out of her room. The other occurs when Greg shows Rachel the movie he and Earl made for her.

Second, if Gomez-Rejon’s intention is for Greg (and the audience) to come to the realization of how selfish Greg is, perhaps the film succeeded. It’s really all in the order of the title: Greg is the most important person in his world, at least in his mind. He wants to be invisible because he’s a selfish person. Many (not all) people who want to be invisible in this world are basically selfish, either because they don’t want to interact with others, or because doing so will make them vulnerable and open to hurt. Both reasons are ultimately selfish. (Believe me, I know. I am an enormously selfish person.) Maybe the lack of character development in the film reflects Greg’s own selfish way of looking at everyone besides himself. By the end of the film, maybe, just maybe, Greg is beginning to realize this and will make some changes.

But, some might say, this is a film about teenagers, people who, in our postmodern times, are basically selfish. Perhaps. And if Greg doesn’t make any immediate changes, at least he has something to think about. And so do we.

Paris, Texas is a film I first saw on VHS after its initial release. At the time, I had gone through a pretty devastating break-up, yet one nowhere near level of intensity as the one we see onscreen. The first shot we see of Paris, Texas is of a haggard man (Harry Dean Stanton, above) wearing a dusty black suit jacket and a red ball cap, wandering through the desert. We have no idea who this guy is, where he came from, what’s happened to him or where he’s going. I love that about the movie and I also love how Wenders takes his time in exploring these questions.

Beckie told me that this movie made her more and more angry the more she thought about it. Initially I thought she was referring to the slowness of the film, which I can certainly understand. That was part of it, but the biggest thing that made her angry was how Travis (Stanton) (1) abandoned his son Hunter (Hunter Carson) to his brother Walt (Dean Stockwell) and his wife Anne (Aurore Clément) and (2) how Travis is wrecking the most stable life Hunter has ever had by removing him from the only real family he’s ever known, taking him to be with his mother and Travis’s ex-wife Jane (Natassja Kinski, above), who makes her living at a peep show club.

I’ll be honest. I’d never really thought about the film from that perspective. (I guess that says a lot about me.) But thinking about it now, yes, Travis’s intentions are deplorable. I know that we could get into all sorts of discussions of parental rights and giving them up, but I won’t go into all of that here.

Roger Ebert lauds the film, comparing it to The Searchers (1956). He is right in that Travis’s “I knew these people” monologue is one of the great monologues in movie history. It is delivered in a way only Harry Dean Stanton could deliver it, and such a delivery brings with it not only a quiet power, but a sadness that sticks with you. (The monologue is so powerful it’s included on the film’s soundtrack release.)

Yet Ebert dismisses the moral problem of taking Hunter away from the care of Walt and Anne, calling the film a fable, an American myth. I cannot dismiss it as such. I can appreciate Ebert’s view of the film as a myth, but it simply includes too many elements of realism for us to dismiss what’s happened to Hunter at the end of the film as fable. It’s not; it happens far too often. Will Jane be able to take care of Hunter, still working at a peep show club? More than likely, she’ll take Hunter back to Walt and Anne. As emotionally damaging as such an act may be, it would certainly be the best thing for Hunter.

Then again, perhaps this is what Wenders wants us to realize, that the element of loss and pain in the film cannot be overcome, that regardless of what the characters do, someone’s going to suffer. I don’t think that’s necessarily fatalism, but fallenness. We make bad choices and we – and sometimes others – have to suffer for them.

On the positive side, Paris, Texas contains absolutely brilliant performances, achingly gorgeous cinematography and a spectacular score from Ry Cooder. It’s a brilliant film, possibly one of Wenders’s best.

So, both Greg and Travis are ultimately selfish characters. I can’t get around that. I also can’t get around myself. Perhaps seeing these two characters reminds me of my own selfishness, something I struggle with constantly. I do not joke here. I could be – in fact have been – these two characters in different situations. Their roles in these films both encourage and warn me not to be like them. Nobody ever said it was easy facing your own faults and weaknesses, but sometimes film – in the midst of entertaining you – slaps you in the face with the truth. Sometimes you need that.

One thought on “The Beckie Project Part IV”