Derek and I recorded a publisher’s spotlight episode in June dedicated to AdHouse Books. The first three titles were part of that discussion which you can listen to here.

END_OF_DOCUMENT_TOKEN_TO_BE_REPLACED

In a hopeless attempt to catch up on all the podcasts in my subscription feed, I recently listened to an episode of Maltin on Movies starring film critic Leonard Maltin and his guest, daughter Jessie Maltin. In that particular episode, the Maltins discussed the differences between growing up watching movies in Leonard’s era (late 1950s and early 60s) and in Jessie’s era (she’s 28). That episode caused me to reflect on some of the films that have stuck with me through the years and decades and why. So here is the first installment of a new series I’m calling Growing Up with Movies.

Although I have memories of many, many films I saw as a kid, I can immediately think of three movies that have had a lasting effect on me, three very different movies from three very different directors, the first of which I’ll discuss today. All the movies I plan on discussing were viewed either at The Town Theater in Forest, Mississippi (no longer standing), one of the theaters in nearby Jackson, MS, or on TV from about 1967 to roughly 1980. I’ll probably have more to say about the theaters themselves as we go, but for now the focus will be on the films and how they have affected me 30 or more years later. I’m not sure how many “episodes” I’ll have in this series, but I do hope you’ll enjoy them. (All of these discussions will contain spoilers.)

END_OF_DOCUMENT_TOKEN_TO_BE_REPLACED 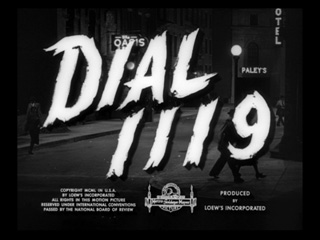 Dial 1119 could be called a “social consciousness” film similar to other later noir films like The Sniper (1952) or The Phenix City Story (1955), movies that clearly contain noir elements, yet also present societal problems and how we handle(d) them. More on that in a bit.

END_OF_DOCUMENT_TOKEN_TO_BE_REPLACED

Derek and I recently reviewed works by two legendary comics creators over at The Comics Alternative, a podcast episode you can check out here. First, we looked at a stand-alone title by Gilbert Hernandez, Grip: The Strange World of Men, originally released as single issues by Vertigo in 2002, now presented in a new collected edition from Dark Horse.

END_OF_DOCUMENT_TOKEN_TO_BE_REPLACED

I’ve read (and am continuing to read) a reasonably healthy amount of graphic novels in June. Here are the first of those books:

END_OF_DOCUMENT_TOKEN_TO_BE_REPLACED

After a full day’s recovery from HeroesCon 2015, I’m ready to share my report with you. This was my first HeroesCon and I certainly hope this marks the first of many I’ll attend. If you haven’t been before – and, of course, if you love comics – I urge you to consider making HeroesCon a regular stop on your comics convention schedule.

END_OF_DOCUMENT_TOKEN_TO_BE_REPLACED

Derek and I had the great pleasure of interviewing comics writer and artist Rick Geary the other day for The Comics Alternative. You can hear that podcast here as well as Geary’s first interview with the Two Guys back in 2013.

END_OF_DOCUMENT_TOKEN_TO_BE_REPLACED

The Two Guys with PhDs – actually, make that Three Guys with PhDs – will be appearing live at HeroesCon in Charlotte, NC this weekend, June 19-21. If you’re at the con, we hope you’ll stop by and chat with us.

If you’re a regular reader of Journeys in Darkness and Light, you know that I write reviews for The Comics Alternative and fill in from time to time on the podcast. I’m honored to be appearing with the Two Guys with PhDs, Derek Royal and Andy Kunka. I actually do have a doctorate, but it’s a DMA (Doctor of Musical Arts) degree in conducting. (You can read about my absolutely spellbinding dissertation if you ever have trouble sleeping.)

So please stop by and visit! You might even appear on a future podcast; you just never know…

While Kathryn and Stuart Immonen have worked on several superhero titles, I first encountered their work through a non-superhero book. Their independent graphic novel Moving Pictures (2010, Top Shelf) is a compelling black-and-white story of a museum curator’s attempts to hide works of art from a German officer during Nazi-occupied France in World War II. I was struck by both the book’s pacing and depth of characterization. Yet, nothing in Moving Pictures prepared me for what I experienced in the creators’ new book Russian Olive to Red King.

END_OF_DOCUMENT_TOKEN_TO_BE_REPLACED

Whew – Finally finishing up the graphic novels I read in May. My previous entry seems like it was a couple of years ago – my apologies. If May’s lists are any indication, June will also be out of control. Prepare yourself!