Dial 1119 could be called a “social consciousness” film similar to other later noir films like The Sniper (1952) or The Phenix City Story (1955), movies that clearly contain noir elements, yet also present societal problems and how we handle(d) them. More on that in a bit.

Director Gerald Mayer opens the film with short vignettes of three seemingly unrelated characters: a seasoned and disgruntled newspaper reporter named Harry (James Bell) who walks out of the newspaper office proclaiming “I’m through,” Helen (Andrea King), a 28-year-old woman who’s unable to have much of a social life due to caring for her ailing mother, and a bartender named Chuckles (William Conrad) who hates the lowlife bar he manages.

We know these characters’ lives are all going to intersect at some point, but before we can dwell on them for very long, Mayer introduces us to the focus of the film: a passenger on a bus headed to Terminal City. We don’t know anything about this young man, other than he gives us a creepy vibe without having said a single word. While all the other passengers exit the bus for a 5-minute rest stop, the young man makes a fateful decision. 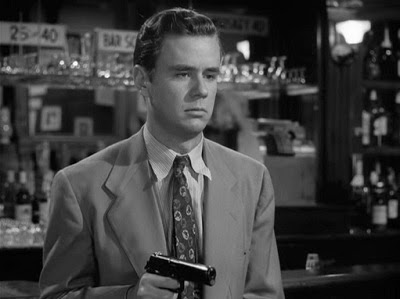 Mayer’s choreography in herding all the characters into place works well in a fairly seamless manner. Before long, the three characters we’ve already met (plus two others) find themselves in Chuckles’s bar, held hostage by the man on the bus, escaped mental patient Gunther Wyckoff (Marshall Thompson). From this point, the film leans more toward suspense than noir, showing the audience the potboiler going on inside the bar as well as the media and police working outside. 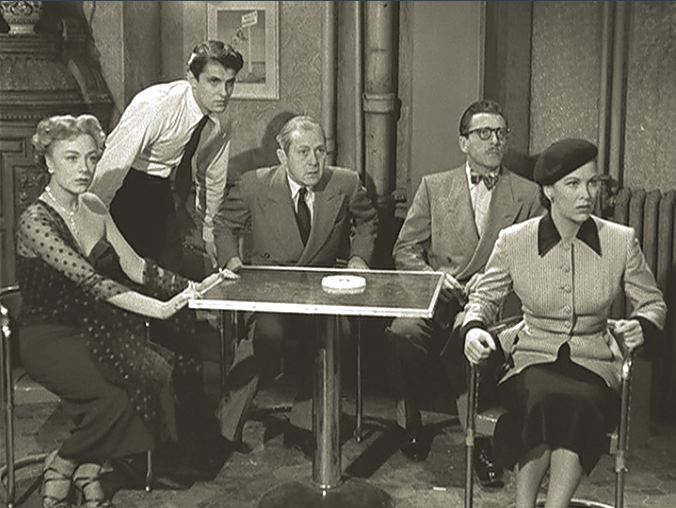 One of the strengths of the film is in how Mayer presents his characters. They’re all either disillusioned, disgruntled or distressed in some way and they all know it. Watching a wrestling match on the bar’s enormous TV, one of the customers says, “It illustrates the society we live in.” We get the feeling that perhaps not too long ago, Wyckoff was one of the disillusioned/disgruntled/distressed, which conversely suggests that the rest of the characters (and maybe ourselves) are just a few steps away from turning into disturbed individuals like Wyckoff. By making these connections, Dial 1119 places itself firmly in film noir territory, reflecting the despair and fatalism of noir. 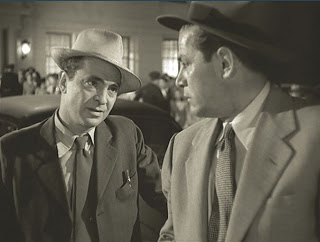 Like The Sniper, Dial 1119 portrays the negative way most audiences of the time thought about people with mental illness. When Wyckoff’s doctor John Faron (Sam Levene, left) offers to go into the bar and talk to his former patient, the policeman refuses. Dr. Faron tells Captain Keiver (Richard Rober, right), “You can’t handle him with ordinary police methods,” but the cop will have none of it. “Nobody’s gonna talk this guy into surrendering,” says Keiver. “We’re gonna have to blast him outta there.” There’s also a nice scene later in which Dr. Faron pleads with the officer one more time. We see the two men reflected in the window of a nearby building when Faron speaks, but when Keiver speaks, the camera pans away from the window to show the men unobstructed, implying that (to the officer and perhaps the audience), Faron’s view of how to handle Wyckoff pales in comparison to the perceived reality of Keiver’s view.

As we might expect, the scenes in the bar with Wyckoff and his hostages create a good amount of tension. In contrast, one shot in particular at first appears static and uninspired, yet in reality is quite remarkable. Wyckoff is standing at the bar, holding a gun on his captives, who are all huddled at one of the bar’s tables, like jurors in a courtroom. As if he’s a defendant on trial, Wyckoff begins a monologue, telling his captives his troubles. (This is the most he’s spoken at one time in the entire film.) The irony is that Wyckoff stands at the bar, a place where customers normally tell their troubles to the bartender, yet Wyckoff is facing the opposite direction, almost pleading to his captors as if they have the power to free him.

What’s less than remarkable is the ending, in which the police make a highly untenable decision, Wyckoff briefly acts out of character, and we’re presented with an ending that’s a bit too light. (Yet on a positive note, we have a cameo of Barbara Billingsley near the end of the film.)

Dial 1119 (which was the number to dial for police emergencies) is an effective film noir that doesn’t get talked about much, but it should. Filmed primarily on the MGM lot (with basically only two sets: the bar and the street), the film offers genuine shocks, suspense, tension, and good performances by actors playing what we might suspect are cardboard characters, which in fact offer several surprises.