During a lecture on film noir at last year’s Noir City DC, Eddie Muller called Gilda “the most perverse movie made in the 1940s.” The sexual subtext seems insanely bold and completely unapologetic for a film released in 1946, almost to the point of obscuring the plot. In fact, in his interview for the recent Criterion release of Gilda, Muller states, “The subtext is the plot.”

A small-time American gambler named Johnny Farrell (Glenn Ford, left) arrives in Buenos Aires, gambles his way to a few bucks in a seedy part of town, and upon leaving is accosted by some of the men who lost their money to him. A stranger rescues Farrell, a well-dressed man carrying a walking cane which conceals a blade in its tip, which he’s not afraid to use. After the ruffians scatter, the man introduces himself as Ballin Mundson (George Macready, right), the owner of an upscale (but very illegal) casino. Almost immediately we sense the levels of sexuality and double entendre that will pervade the film as Mundson proudly refers to his cane as his “little friend.” A few moments later, Mundson invites Johnny to join him, saying “I’ll need both my little friends tonight.”

Mundson hires Johnny to work at the casino, and after a rocky start, he’s accepted by the staff, with the exception of a washroom attendant known as “Uncle Pio,” (Steven Geray) who always refers to Johnny as “Mr. Peasant.” That doesn’t matter much, since Mundson is pleased with Johnny’s, uh, performance, let us say.

It must have been clear even to 1946 audiences that something was going on between Johnny and Mundson. Just look at the way Johnny looks at Mundson, the questions he asks him, how inseparable they are from each other. Even the most doubting moviegoer would have to admit the two men have a relationship going, especially when Rita Hayworth appears as Gilda in what is arguably one of the most famous entrances in film history.

From this point, things get a bit weird. Mundson has just introduced Gilda as his wife, a revelation that visibly shakes Johnny as frightening, cruel, and possibly even perverse. On one level, we understand the hatred Johnny feels for Gilda; she’s intruding on the good times he’s had with Mundson. But Johnny also feels betrayed. But there’s more going on here, much more, but to tell you would be criminal.

I will tell you that raw emotion has passed any semblance of logic and is running toward the finish line at breakneck speed. Most of that emotion comes in the form of hatred, something that’s even acknowledged by Mundson when he tells Gilda, “Hate can be a very exciting emotion. Very exciting. Haven’t you noticed that?”

Watching Gilda, you’re never really sure where it’s going, what’s going to happen next, or what it will mean for the characters who manage to arrive at the end. In some ways, the ending isn’t a surprise, but in other ways, it is. Does the ending work? I’ll let you decide for yourselves, but you can’t help but wonder if the ending might’ve been more satisfying without the Production Code. Most certainly it would be different and probably stronger.

Again, in his interview, Eddie Muller brings up some interesting points about Gilda, wondering what it was like for 1946 audiences seeing it. Was it, he speculates, the Mulholland Drive of 1946? Did people “get” it? Did the Production Code let so much of the film get a pass because they didn’t really know what to make of it? Is Gilda a femme fatale? Or rather, is there a homme fatale? And if so, who is it? Johnny or Mundson? Again, watch the film. 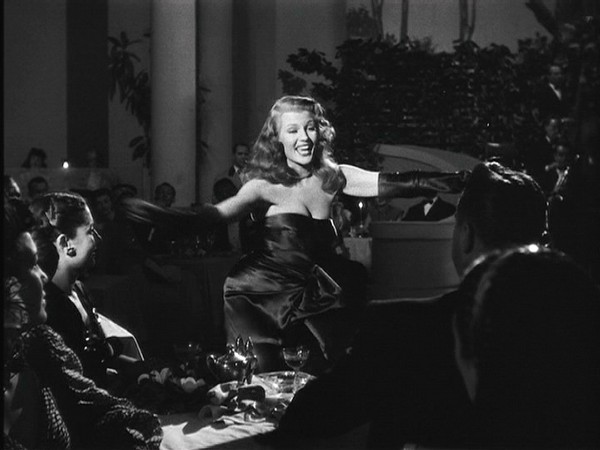 The cinematography by Rudolph Maté is spectacular in the way he lights Hayworth in order to show her extraordinary beauty in both light and shadow. Her musical numbers come close to stealing the show and I don’t think anyone who watches her “Put the Blame on Mame” number will ever forget it.

The Criterion Blu-ray includes the aforementioned interview with Eddie Muller, an audio commentary from 2010 by Richard Schickel, a 2010 piece with Martin Scorsese and Baz Luhmann discussing the film, a 1964 episode of the TV show Hollywood and the Stars called “The Odyssey of Rita Hayworth,” a trailer, and a printed essay by critic Sheila O’Malley. If you’re a fan of classic film, this is an essential addition to your collection.