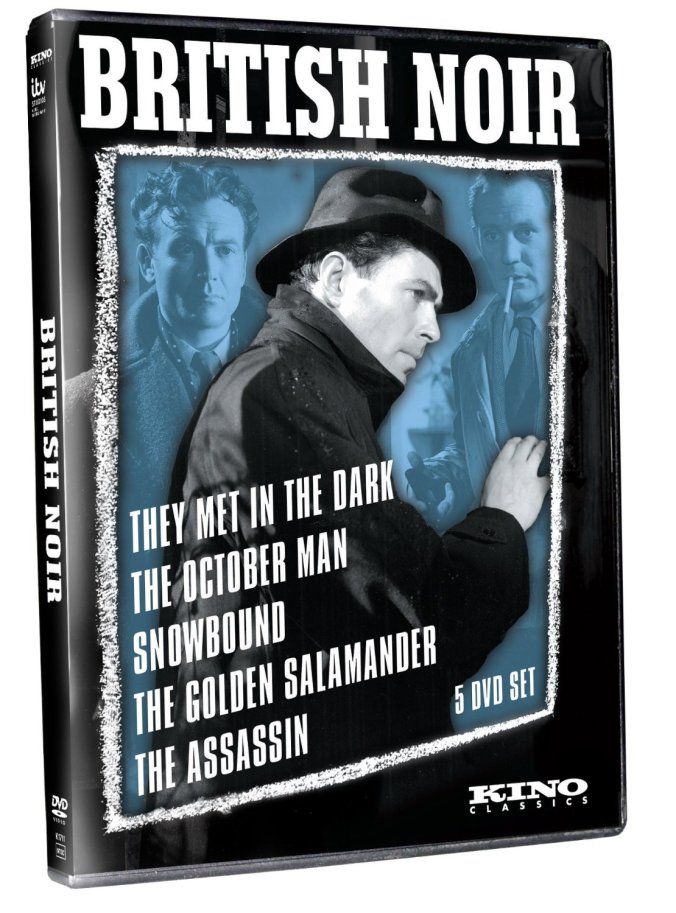 So you’re a film noir fan, maybe a veteran noir watcher, or maybe you’ve just gotten bit by the noir bug. Is this set for you? Let’s take a quick look at each of these films individually and see: 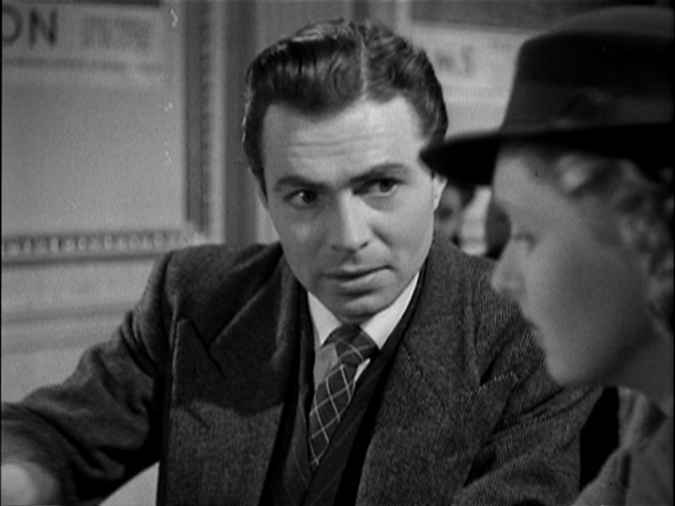 This British thriller about a dismissed Royal Navy officer (James Mason, above left) and a young woman (Joyce Howard, right) attempting to solve a murder and bring down a German spy ring is all over the place, packing in espionage, romance, and music. Unfortunately none of these combinations work very well. Even Mason, who had made about 20 films at this point in his career, can only keep things moderately interesting.

I’m at a loss to understand why Kino decided to lead off this collection with what is in my mind the weakest film in the set. Maybe it’s due to the star power of James Mason, maybe it’s because They Met in the Dark seems the most noirish-sounding title, or maybe it’s because chronologically it’s the earliest film of the five. 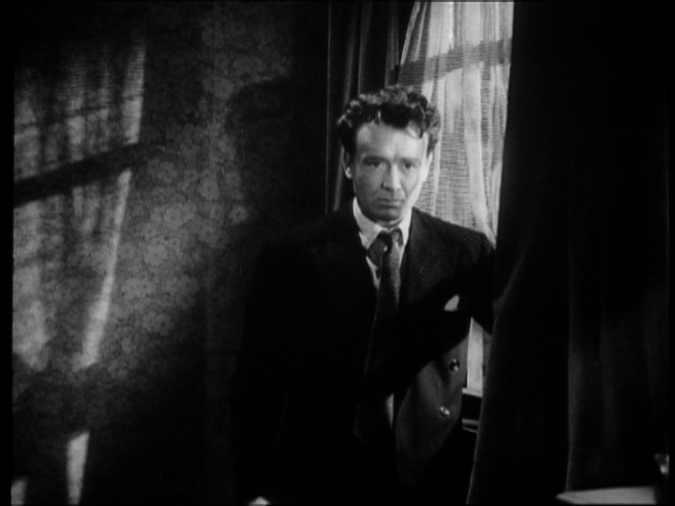 Director Roy Ward Baker (credited in most of his films as Roy Baker) had a long career, directing such films as A Night to Remember (1958) and Don’t Bother to Knock (1952). The October Man was his first film and it’s rare that someone’s initial directorial outing is this good.

Of course, having spy novelist Eric Ambler writing your screenplay (based on his own novel) doesn’t hurt. John Mills (above) plays Jim Ackland, a man whose accident led to a brain injury that makes him forget many of his actions. Is it possible he killed a young girl and can’t remember it? Or is there something else going on, someone taking advantage of Ackland’s condition for some nefarious purpose? Hmmm….. Also stars Joan Greenwood. Quite good.

Snowbound is an average British noir that’s really more espionage thriller than noir, although the thrills take quite awhile to develop. Dennis Price poses as a movie screenwriter trying to get some writing done in an Alpine lodge, but he’s really spying out people who might be looking for hidden Nazi treasure in the Alps. Standouts are Herbert Lom (above) as a shifty character who’s certainly suspicious and an amazing musical score by Cedric Thorpe Davie and the London Symphony Orchestra.

The Golden Salamander (or simply Golden Salamander, as it appears in the opening credits) begins well with archeologist David Redfern (Trevor Howard, left) driving along a twisting Tunisian mountain road at night during a rainstorm. He finds a wrecked truck carrying a large shipment of firearms. Nearby, a couple of men in the shadows wonder just how much Redfern has seen.

Redfern is actually in Tunisia to catalog a collection of artifacts, but he’s more interested in the goings-on of the gunrunners. And they’re certainly interested in him. Redfern gets distracted by local girl Anna (Anouk Aimée, right) and you can guess what happens from there. (Never mind that at the time, Howard was 37 and Aimée only 18.)

Don’t get me wrong, I like Howard, but Indiana Jones he is not. (I know, that’s an unfair comparison, but there it is.) Herbert Lom appears in this movie as well and is excellent as one of the bad guys. The movie is somewhat compelling, certainly not the worst of the lot. 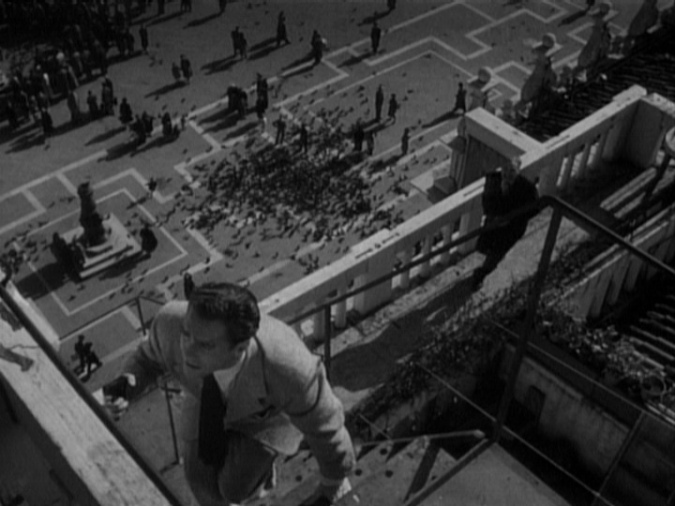 British private detective Edward Mercer (Richard Todd, above) arrives in Venice to find a man who was a hero in the war, hoping to bestow a reward to him. But Mercer receives conflicting information about the man. Is he still in Venice? Is he even alive? Are people trying to cover up the truth about him?

Fairly or unfairly, The Assassin (originally titled Venetian Bird, which may not be a very exciting title, but the use of The Assassin is actually a spoiler. Sorry…) must certainly be compared to The Third Man, not only in its Venetian setting, but also its overall plot and tone. The twists and turns in The Assassin often seem manipulative and tiresome, but the film does sustain our interest, largely due to Todd and the lovely Eva Bartok.

So should I get this set?

Your enjoyment of this five-film collection may depend upon just how you define film noir. To my way of thinking, most of the films here are espionage movies with elements of film noir. Some may disagree, but I’d say The October Man is the only true film noir in the package: here’s an ordinary guy placed in an extraordinary situation, being pinned for a crime he didn’t commit (or did he?). Sounds like noir to me.

The Golden Salamander runs a close second. Again, we have a rather ordinary character, an archeologist who finds himself in the middle of something he doesn’t really know how to handle, but he knows he must do something. Perhaps that’s why I rated these two films the highest of the set: they have enough noir in them to separate them from being categorized as anything else, such as an espionage thriller, which I think is the best category for the other three films.

Each film in the Kino Lorber set gets its own separate disc, but with no extras and no subtitles. The films themselves look and sound fairly good on DVD (Snowbound is probably in the worst shape, but still, it’s not bad.), which is probably the best they’re ever going to look and sound. (I’d be surprised if any of these films make their way to Blu-ray.)

So should you pick up this British Noir set? If you’re a noir completist, yes. If you enjoy British films from the noir era, yes. It’s a nice collection and one worth having. The question is how much would you be willing to pay for it? I bought the collection on Amazon a few weeks ago for about $13. The set is now about $31. I wouldn’t say this is a must-have for most noir fans, but if the price drops low again, it’s certainly worth taking a chance.