Every now and then you encounter a film that speaks to you in vastly different ways depending upon your age and life experience at the time you see it. Roger Ebert spoke to this often when discussing his long-term relationship to the film La Dolce Vita (1960).  Such films never change, but our life situations and ways of thinking do, tricking us into believing that we’re seeing a different movie at age 40 than we saw at age 20, for example. Michael Powell and Emeric Pressburger’s The Life and Death of Colonel Blimp is one such film, yet whereas La Dolce Vita takes place over the course of only seven days and nights, Colonel Blimp covers decades. 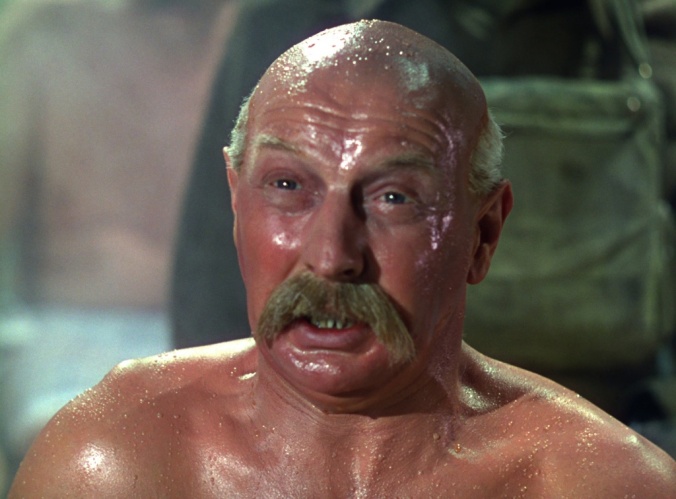 The film opens in 1942 with a young, eager lieutenant in the British army (James McKechnie) who takes it upon himself to change the rules just before a Home Guard military training exercise. “War starts at midnight,” has always been the standard by which these maneuvers have taken place, but this young upstart decides upon a surprise attack, capturing several high-ranking British officers at the officer’s club. The young soldier finds the highly respected veteran Major-General Wynne-Candy (Roger Livesey) relaxing in a Turkish bath, then proudly informs the major-general that he’s been captured. Wynne-Candy is livid. “You bloody young fool! War starts at midnight!” The lieutenant states that the Nazis don’t play by the rules and neither should the British. He further belittles Wynne-Candy by making fun of the major-general’s fat stomach and walrus mustache. (Even the name “Candy” suggests something frivolous, lacking in substance.) Yet Wynne-Candy will have none of it. “You laugh at my big belly, but you don’t know how I got it! You laugh at my mustache, but you don’t know why I grew it!”

You’ll have to see the film to discover what happens next, but I will tell you that we (along with the brash lieutenant) learn the answers to Wynne-Candy’s girth and whiskers and then some. A series of flashbacks show us the development of the major-general from 1902 to the (then) present day of 1942. As we travel with Wynne-Candy during these flashbacks, we see the changes not only in the man, but also in society, how people thought and behaved, how they carried themselves via a code of honor, how they lived and how they loved.

Fairly early in the flashback sequence, we see a young Wynne-Candy giving insult to a room full of German soldiers which leads to a duel. Wynne- Candy has insulted not simply one man, but the entire Imperial German Army, so when a duel is proposed, the German soldiers seek a volunteer to go up against Wynne-Candy.

Powell and Pressburger do so many different things extraordinarily well in this film. After the duel is announced, the Germans must instruct the Brits as to how the affair must be handled, giving them a complete rule book covering each and every aspect of the duel. The machinations of the situation are so clearly ridiculous that we the audience recognize it immediately, yet the British accept everything as it happens, seeing nothing out of the ordinary whatsoever. Perhaps this explains how Wynne-Candy sticks to his determination later in life (but earlier in the film) that things are supposed to happen a certain way. “War starts at midnight,” after all. One of the things that makes Colonel Blimp such a treasure is that Powell and Pressburger have created such a scene that allows us to recognize this situation for what it is, yet place it within the context of a flashback, to show us that this is a part of Wynne-Candy’s formative, learning experiences which helped develop him (for good or bad) into the man we see at the film’s opening.

Yet even though we’re in the middle of a long flashback, the concepts of friendship and love develop more in a progressive chronological manner. Wynne-Candy’s love interest(s) in the film is supplied by Deborah Kerr (pronounced “car”) playing the role of Edith Hunter, an English governess living in Berlin, then later as Barbara, a nurse. Finally, Kerr reappears as the driver of Wynne-Candy’s jeep in World War II. I won’t disclose how these three characters, all played by the same actress, work in the film, but it’s not the distraction you might expect.

Neither is Wynne-Candy’s friendship with the German Lieutenant Theodore Kretschmar-Schuldorff (Anton Walbrook) a distraction, but an honest, beautiful, and sometimes painful look at how friendships can develop during war. All of the performances in the film are outstanding, but Walbrook captures something in the role of the German lieutenant that goes straight into our marrow. You watch the film and can’t help but wish that he was your friend, too.

Once again, the way Powell and Pressburger weave these themes of love, friendship and war in and out of the story is simply masterful and exceedingly rare. You can’t name many “war” films that handle this balance nearly so well, but you can probably think of some that don’t. (I’m thinking particularly of Pearl Harbor, but you can probably name others.)

Seeing Colonel Blimp as a young person, say in his or her 20s, will no doubt evoke a whole range of feelings and emotions: patriotism, vigor, justice, enthusiasm… Watching the film as an older person, say in their 50s (like me), brings to mind a reflection on where you’ve been, what you’ve done, and perhaps things you should have done. Colonel Blimp not only allows us to see these differences, but forces us to deal with them at least on a fundamental level. People who were once young become old, and old people – completely unknown to the young people now encountering them – were once young. That’s a very obvious and fundamental observation that happens every day, but here that simple lesson carries impact because we’ve literally seen a lifetime compressed into just under three hours (although the film seemed much shorter to me).

If you’ve never seen a Powell/Pressburger film, you should know that these guys excelled at attention to detail. People still gather to see and discuss films such as Black Narcissus (1947), The Red Shoes (1948), The Tales of Hoffmann (1951) and others, on the big screen whenever possible. The Life and Death of Colonel Blimp predates all of these films, yet is glorious in its Technicolor, set design, cinematography, musical score, costumes, and more.

You must also know a few things about the movie before you see it: the film was partly inspired by a cartoon strip created by David Low, but was probably more inspired by a scene that was cut from the Powell/Pressburger film One of Our Aircraft Is Missing (1942), which shows an elderly man informing a younger one, “You don’t know what it’s like to be old.” Colonel Blimp was also considered (and still is) one of grandest examples of the Technicolor era. The film famously infuriated Winston Churchill, who wanted the production of the film stopped. You can read an extensive account of Churchill’s efforts as well as how the film was received in 1943 here. 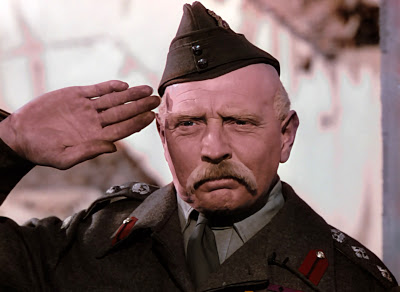 The Life and Death of Colonel Blimp could easily slip past your notice. The title implies a military comedy, and although it certainly contains multilayered comedic elements, the totality of the film does far more than make us chuckle or laugh. It makes us think about life, love, and our place in the world. How many films from any era can do that?

Many thanks to my friend Ann for loaning me a DVD of The Life and Death of Colonel Blimp. (I, in turn, loaned her my Flicker Alley release of Woman on the Run.)